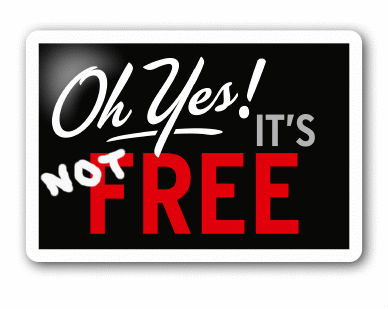 Why I Oppose “Free” College Tuition

I was talking to a Bernie Sanders supporter tonight, yes I know a few, and I shocked him with my confession that I did not support ‘free’ college tuition. He declared, “You heartless philistine.”

The idea that Federal taxpayers should be compelled to pay for college tuition is one of the dumbest, least productive, and most wasteful ideas, in terms of public policy, that I can think of. Just imagine a student getting a degree in basket weaving, women’s studies, sociology, or any other number of non academic dubious majors and then having taxpayers pick up the $100,000 plus tuition.

First, a point I wish that socialists could understand, nothing is free. It is worth repeating, nothing is free. Someone has to pay the bill. In this case taxpayers, most of who paid their own tuition years ago will be forced by the Feds to pay someone else’s.

I assume the government would not give ‘free’ tuition to every major. This would be too ludicrous even for the Federal Department of Education. So my guess is that they would create a list of approved majors. A committee of 35 civil servants would take about 6 months to complete the list, which of course would be very political. Things that are not real academic disciplines such as women’s studies, gender studies, and sociology would be for the sake of political correctness included. And no doubt they would also have more practical less political majors such as engineering, science, and mathematics, etc.

With an approved majors list a student is more likely to choose the wrong major. Now, let’s say a student is really good at basket weaving, He has the potential to be the Michael Jordan of basket weaving. In fact he really wants to major in that subject. But, it is not on the list of free majors, which was written by the aforementioned 35 bureaucrats with the Federal Department of Education.

So let’s say with pressure from his parents the student goes the practical route, majors in engineering, which is free, since the Feds will pay the tuition. Now he has no desire, or ability, to be an engineer, but, the government is paying, and they are not paying for basket weaving.

The student is smart enough to get decent grades, and he graduates with a degree in engineering. After a few years bouncing around from job to job he realizes he doesn’t want to be an engineer. In his early 30’s he realizes that basket weaving is his calling in life and he breaks into the business. He wasted a lot of time and the taxpayers wasted a lot of money.

This may be a little tongue and check, but my point is government planning leads to waste and perverse incentives. “Free’ college tuition is just one of a thousand examples.

It is far better to let students major in whatever subject they want. And it is their education. They should pay the bill. They will feel a sense of pride in paying their own way. Also, remember state, and federal dollars are already heavily subsidizing colleges and universities. Taxpayers already cover enough. The cost of tuition, books and beer should be borne by the student.

AH, yes I do reject crackpot ideas coming out of an old left wing Stalinist (with Pete Seeger now gone to banjo playing heaven Sanders may be the last one in the US) who calls himself a social democratic for the uninformed and just plain ignorant. You realize this is purportedly a conservative blog, correct? We probably won’t support the $18 trillion dollar price tag for Sander’s other proposed programs either. Is this even a discussion topic or just another fringy article that seems to be appearing more frequently around here?

Sanders winning the primary would be the gift that would never stop giving. You can almost hear the glee in conservatives voices when they talk about the possibility of Sanders winning against Clinton.

Students who don’t pay for their education (at least a part of it) would not value that education. The ramifications of that should be obvious.