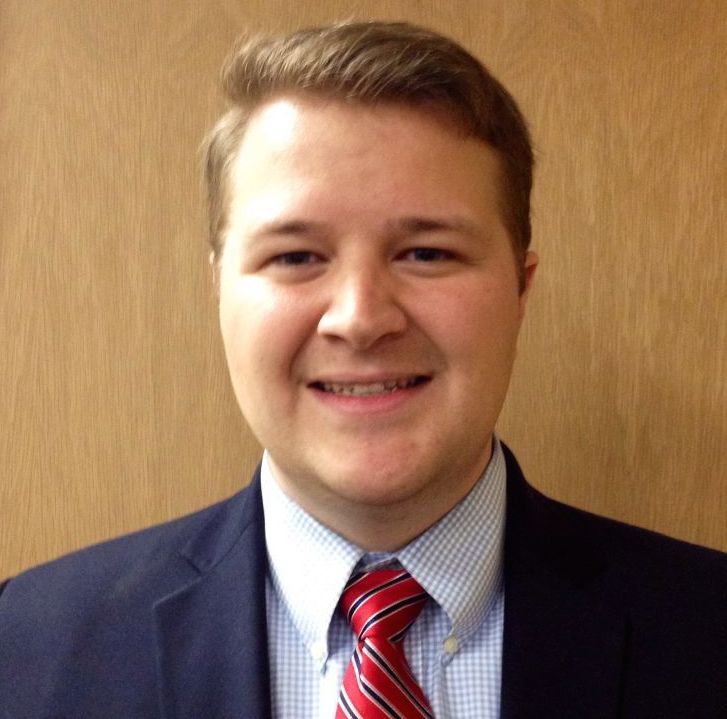 Why is a GOP Chairman supporting candidates running against Republicans?

To say I am shocked and angry really doesn’t convey the reality.

It has become obvious to us in the Campbell County Republican Committee (CCRC) that Zach Martin – the Chairman of our sister GOP committee in Lynchburg – is serving as a de facto campaign consultant to liberal tax-and-spend opponents to our Republican nominees for Board of Supervisors. We have been stabbed in the back by our next door neighbor chairman. (Martin also doubles as Chairman of the Lynchburg Area Young Republicans (LAYR) club, which covers Lynchburg, Campbell and three other surrounding counties).

Our candidates in question are Dr. Jim Borland, the GOP incumbent in Spring Hill District and a theology professor at Liberty University; and Bob Good, our nominee in Sunburst District and the assistant athletic director at Liberty. They are opposed respectively by John Ferguson and Travis Griffin, running on the so-called “Campbell First” ticket. Like its sister group “Lynchburg First,” with which Martin is quite familiar, “Campbell First” is a dishonest name for a group that can’t use the “Democrat” label and win in deep-red Campbell.

TBE readers will recall John “Slater” Ferguson, who helped engineer a takeover of the CCRC in March, 2014, by openly inviting Democrats to attend the mass meeting to support him, in order to make sure that “no more Republican extremists” would be elected to our Board of Supervisors. Removed by State Central Committee, he then sued RPV and established a GoFundMe page to raise legal funds, again calling for the defeat of the “three extremist” Republican supervisors, including Borland and myself. Now he is running against GOP incumbent Borland, and Griffin, Ferguson’s former treasurer, is opposing GOP nominee Good. Ferguson and Griffin are nothing if not consistent in their drive to remove all Republicans from our local government. This is old news. Martin’s key role in the campaign, though, is truly shocking.

The first inkling we had of Martin’s guerilla war against our candidates was in July. Martin, also a former chairman of the Liberty University College Republicans, staffed a “Republican” booth at the “Celebrate America” event hosted by Liberty and Thomas Road Baptist Church. He invited Congressman Bob Goodlatte, who helped staff the booth. He also invited Ferguson, and allowed him to campaign against GOP nominee Borland from the Republican booth! Presumably Martin did not think it advisable to tell Congressman Goodlatte who Ferguson was, or of the compromising position in which Martin was placing the Congressman. He was advised by his own Lynchburg GOP vice chairman, Brian Triplett, that Ferguson should not work the table to campaign against a Republican nominee. He nonetheless extended the invitation and allowed Ferguson to campaign.

On July 2, Jeff Taylor, the Secretary of our CCRC, while out for lunch at the Yellow Submarine restaurant in Lynchburg, overheard Martin advising Griffin at a nearby table. Martin discussed the likelihood of Griffin’s obtaining endorsements from county elected officials against GOP nominee Good, and advised Griffin on how to run election-day operations that would “throw them [GOP candidates] for a loop.”

We hoped these attacks had ended. But last Saturday Martin had Griffin present at a meeting of the Lynchburg Area Young Republicans, applying for membership! Confronted with the fact that Griffin is ineligible to participate as he is currently running against the GOP nominee, and could not state his intention “to support all Republican nominees in the ensuing general election” as required by the Party Plan, Martin refused to acknowledge the authority of the Plan and stated, “You can vote against him when the meeting starts if you like.” (Just as the meeting opened, Griffin, caught red-handed, withdrew his application and departed).

I can no longer ignore Martin’s guerilla war against our candidates. Were I, as Campbell GOP Chairman, to consult for “Lynchburg First” (Democrat) candidates like Mayor Mike Gillette against Martin’s GOP nominees, he would justifiably call for my head. I cannot sit quietly by while he stabs our committee and our candidates in the back. I cannot speak to his motivations, but the record is clear that his actions are intentional, premeditated, and strategic.

In an effort to address and end this cannibalism, I have sent a letter to the Lynchburg Republican City Committee, asking for “swift, appropriate and decisive” disciplinary action of Martin. I have also sent a letter to Congressman Goodlatte, and Senators Steve Newman and Tom Garrett, and Delegates Kathy Byron and Scott Garrett, who represent Lynchburg, and several of whom also represent Campbell, asking that they also step in. I have also contacted RPV Chairman John Whitbeck and asked for his intervention.

These actions by Mr. Martin are the highest form of betrayal of our Party Plan, and a massive breach of trust against the members of his committee, ours and the LAYR. They are a declaration of war against a sister committee and its candidates.

Article VII, Section C of RPV’s State Party Plan is clear: “A member of an Official Committee is held to a higher standard of support for nominees of the Republican Party…. Therefore, a member of an Official Committee is deemed to have resigned his Committee position” if he “…makes a public statement in support of a candidate in opposition to a Republican nominee.”  Serving as a campaign consultant to Griffin and handing out his business card as GOP Chairman while simultaneously inviting and allowing Ferguson to campaign from the GOP booth against GOP nominees certainly qualifies.

I request that our GOP representatives at the federal and state levels, as well as RPV leadership, make it forcefully clear that this sort of knifing of GOP nominees will never again be tolerated. It’s time we elect Republicans, not conspire to defeat them!

TBE is happy to provide a forum for opinions from all sides of the center-right coalition. We understand Zach Martin, who has a long history of service to the Republican Party, denies the allegations in Mr. Zehr’s article. We would be happy to publish any rebuttal or counterpoint.

However, we believe that, at the very least, the facts support a conclusion that Mr. Ferguson and others running against GOP nominees in Campbell County under the “Campbell First” banner do not deserve the support of Republicans or other conservatives. From Facebook: 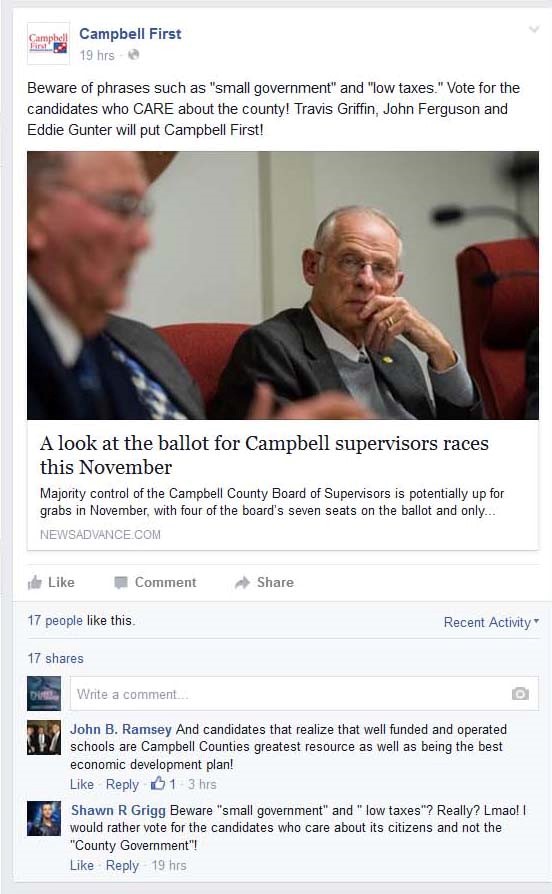