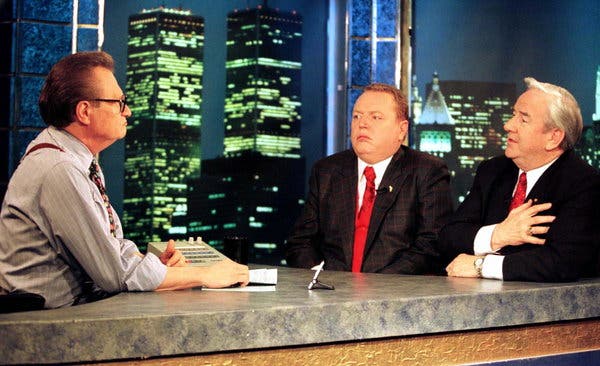 His Supreme Court victory in 1988 on free speech was a landmark, but it’s being co-opted by cancel culture and social media’s ascent

Our family was talking the other day about how so many famous people who enriched our lives have passed in 2021 but the contribution of Larry Flynt, the pornography purveyor who died this past week, should not be overlooked.

I am referring to the case Flynt waged to defend a parody ad his “Hustler” magazine published in the early 1980s, which depicted televangelist and political commentator Jerry Falwell Sr. as an incestuous drunk.

In a unanimous landmark decision in 1988, Supreme Court ruled “that the First and Fourteenth Amendments prohibit public figures from recovering damages for the tort of intentional infliction of emotional distress (IIED), if the emotional distress was caused by a caricature, parody, or satire of the public figure that a reasonable person would not have interpreted as factual,” according to Wikipedia, which adds:

“Therefore, the Court held that the emotional distress inflicted on Falwell by the ad was not a sufficient reason to deny the First Amendment protection to speech that is critical of public officials and public figures.”

Given today’s “cancel culture” and efforts by liberaldom to ban “hate speech” and “seditious speech,” this part of the ruling by the conservative Rehnquist Court is most significant:

“At the heart of the First Amendment is the recognition of the fundamental importance of the free flow of ideas and opinions on matters of public interest and concern. The freedom to speak one’s mind is not only an aspect of individual liberty – and thus a good unto itself – but also is essential to the common quest for truth and the vitality of society as a whole. We have therefore been particularly vigilant to ensure that individual expressions of ideas remain free from governmentally imposed sanctions.”

Wikipedia adds: The First Amendment envisions that the sort of robust political debate that takes place in a democracy will occasionally yield speech critical of public figures who are “intimately involved in the resolution of important public questions or, by reason of their fame, shape events in areas of concern to society at large.”

In other words, parodies in pornographic magazines deserve First Amendment protection, too.  I would add that folks of extreme political and religious views deserve protection as well – as long as their actions do not cause physical harm to others or property!

Flynt’s case, plus his sordid and weird life, including being shot and paralyzed, was depicted in the 1996 film The People vs. Larry Flynt  After the movie appeared, he and Falwell, who has since passed, became friends and corresponded regularly – another throwback to an era when liberals and conservatives could be friends.

In the 1980s, the media and civil libertarians heralded the decision.  Today, in large part due to the demise of traditional journalism and rise of social media and multicultural imperialism, where any hurt feeling infraction becomes a federal case, news organizations are more apt to run story after story about the conservative “outrage” of the day.  They are now campaigning to ban Fox News, Newsmax and stifle dissent deemed to be “insurrectional”  or revised the Fairness Doctrine.  And social media giants have “terms of service” that enable the stifling of conservative speech they deem to be “harmful,” as they are protected from liability by Sec. 230 of the 1996 communications act.

But Flynt helped bolster free speech protection in the U.S.  Without the free flow of ideas – even immoral ones – the “vitality of society as a whole” (as the Supremes wrote in 1988) is lost.

Conservative media and political leaders have not made much of Flynt’s passing and contribution to the First Amendment.  Not easy to defend a pornographer.

But I hope Republican statewide candidates and House of Delegate candidates this year will be making more of an effort to protect people and their jobs from being “canceled” for their political and religious views.

Why Larry Flynt was a hero in the battle for free expression was last modified: February 13th, 2021 by Guest Contributor Ken Reid