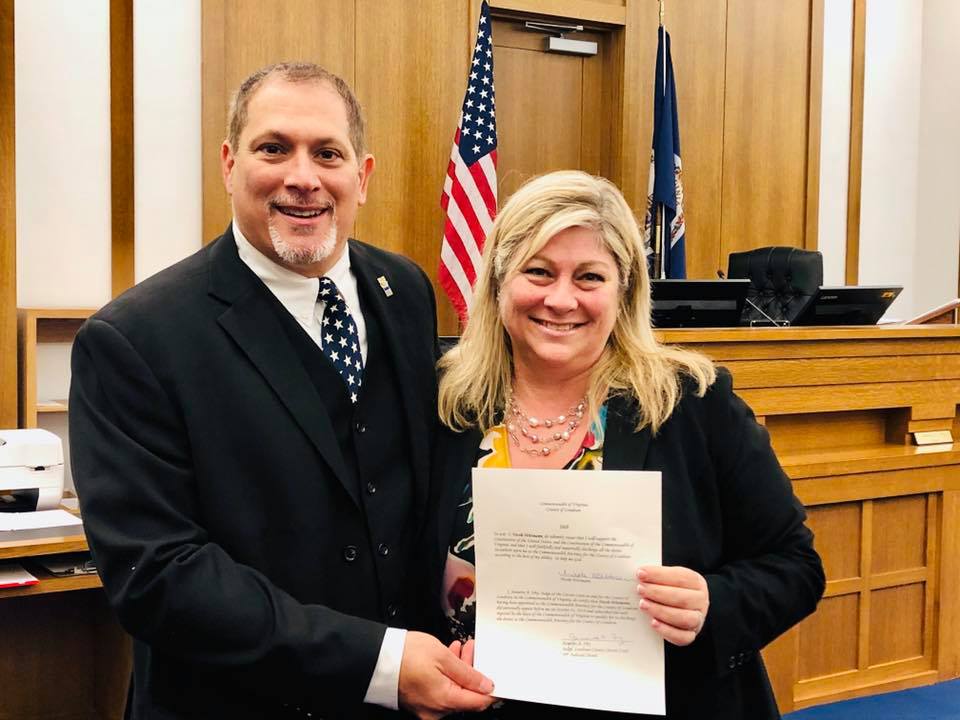 Why Loudoun needs to keep Nicole Wittmann as Commonwealth’s Attorney

On October 31st Nicole Wittmann was sworn in as the interim Commonwealthâ€™s Attorney for Loudoun County We need to go to the polls on Tuesday and elect her to remain in the job protecting all of us.

The Commonwealthâ€™s Attorney (CA) is the chief prosecutor in the county, they assemble the staff and expertise to prosecute criminals and build the relationships with federal, state and local law enforcement and all county resources for victims and their families.

Nicole Wittmann has been a prosecutor for 26 years, to include 15 in Loudoun County and is now the Chief Deputy Commonwealth. Nicole has a husband, 2 children and has lived in NOVA for over 26 years. Commonwealth Attornies across the political spectrum have endorsed Nicole because they understand the need for experience in all aspects of the job:

Richard Trodden, Former CWâ€™s Attorney in Arlington (and a Democrat).

As the Chief Deputy CA Wittmann has been responsible for the prosecution of the worst of the worst like murderers and rapists â€“ but felonies large and small. She has been instrumental in implementing **presenting complex DNA through the use of True Allele technology (and was one the first CAâ€™s in Virginia to do so. She is frequently consulted on how to present True Allele in court and has even had other attorneys and personnel from the ATF come watch her court. She) was the first attorney to successfully present cadaver dog evidence in court and successfully defend it on appeal (that was the Braulio Castillo case). She is an expert in presenting cell phone technology in court and has used it successfully in multiple cases as well.**

The annual survey of Loudoun County residents (2018) shows that 87% think their quality of life in Loudoun is either excellent or good. Page 3 shows that 90-96% think their community is safe. Loudoun cannot afford to elect Wittmann’s opponent who is soft on crime and will not protect our county from gangs and criminals. Wittmann will.

There is no â€œschool to prisonâ€ pipeline in Loudoun – therefore calls for this to stop are not real. Currently the Loudoun Juvenile detention facility houses 4-6 children which can be individuals up to age 18. Loudoun also has an agreement with other counties to utilize our space, so at any given time we are housing juveniles from another county. Usually about half of the youth at the Juvenile Detention Center are not Loudoun youth because we also house children from Rappahannock plus courtesy holds from Fairfax (i.e. if they have gang members that â€œstay awayâ€ orders, theyâ€™ll separate them and send one to Loudoun).Â  Also, back in 2007, the Juvenile Detention Center was at 100% capacity. However, Nicole served on the Juvenile Justice Committee which is comprised of multiple county stakeholders, including the Juvenile Court Services unit, the Juvenile Court Judges, our office, the LCSO, LPD, etc. They decided to bring to Loudoun an initiative called JDAI which stands for Juvenile Detention Alternatives Initiative. Thanks to JDAI, which Nicole was an early champion of, the population at the Juvenile Detention Center has dropped by 75%. In fact, the county is building a new detention center and the early plans for a 60 person bed facility have been totally scrapped for a 12 person facility because our numbers are consistently so low.Â Â

It is also important to remember that in this whole call to abolish the school to prison pipeline accusation that Wittmann’s opponent, Buta Biberaj, is so fond of making, she keeps proclaiming that Loudoun is increasingly making school based arrests for school-based behavior. In one of her videos, she claims that we arrest children for talking back in class to the teacher. This is complete nonsense and a total lie. Out of 84 thousand children in Loudoun Schools, there were TWO SCHOOL BASED arrests in the past twelve months. One was for bringing a bb-gun to school and the other was for physically assaulting an SRO.Â  It should also be noted that of 84k children in our school, there are only 58 kids on probation in the entire county. We have also not committed any kids to the Department of Juvenile Justice in the past twelve months (committed means sending kids downstate, these are the kids that have committed such a serious felony that they go to the youth version of the penitentiary).

Biberaj has made statements to indicate that the CAâ€™s office is not â€œdiverseâ€ enough, meaning she will immediately fire or replace the long serving attorneys that have been protecting Loudoun. If you consider the depth of experience with the management team alone, Buta would be firing Nicole (26 years experience), Alex (26 years experience), Sean Morgan (30 years experience) and Jason Faw (15 years experience). Her replacements will not prosecute but implement an array of SJW programs that have nothing to do with the security of Loudoun citizens. I would also note that she criticizes our office of public servants for not being diverse enough, but she has never been in public service a single day in her career as an attorney. Walk the walk Buta.Â

Biberaj was not a full time judge for 11 years as she is claiming. She was appointed a substitute judge by the circuit court and handled cases like traffic court. Substitute judges APPEAR IN COURT ON DAYS ON DAYS WHEN THE FULL TIME JUDGES ARE SICK OR ARE ON VACATION ONLY, but it a lie to portray yourself as a full time judge when in fact you may be called to the bench only a handful of times per year. Full time prosecutors do all the prosecuting in Loudoun and everywhere all over the country â€“ no one can claim this experience if they do not have it. Biberaj has been a full time defense attorney for over 20 years in Loudoun, protecting child rapists and other horrible criminals.Â Â

George Soros has contributed over $200K to Biberajâ€™s campaign. Some of the other candidates he has supported are Kim Foxx in Chicago and Larry Krasner in Philadelphia. Google Soros and these 2 DAs and you will see that not only are they unqualified â€“ they are expanding crime in their community. JUST THIS WEEK LARRY KRASNER FACED PROTESTS OUTSIDE HIS OFFICE FOR REDUCING A MURDER TO A MANSLAUGHTER BEFORE IT EVEN WENT TO TRIAL. Loudoun is not Philadelphia or Chicago.Â

Biberaj is now putting illegal signs up knowingly all over Loudoun. Wasting taxpayer money from VDoT to take them down. How can we elect someone to be our top law enforcement officer when they knowingly break the law and think they are above the law?

Buta knowingly lies about cases in her mailers. She knows they are lies because for one of them, her firm handled the case!

Please go to the polls this Tuesday to protect Loudoun County citizens by voting for Nicole Wittmann to continue as our Commonwealth’s Attorney.