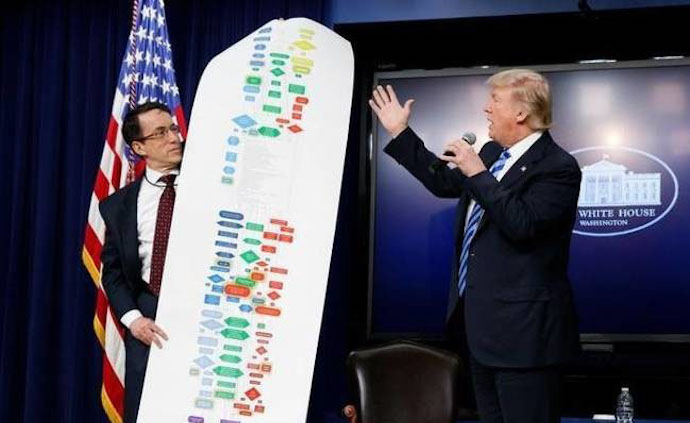 Why Republicans need to support infrastructure

Rising disability and dependency on government programs is a serious problem

In my 10 years in local office, and 20 years as a civic activist in the DC area, I have always been an emphatic supporter of infrastructure – and, the necessary taxes to pay for it.

Hence, I am an unabashed supporter of President Trump’s $1 trillion plan to invest public and private money into upgrading our airports, power facilities, broadband networks, and most especially, build new transportation facilities.

There is no doubt that free market economists and advocates will say – -this is not the best use of government or even private resources. Government projects always cost more and they achieve temporary employment results.
However, the president (finally) spoke out about the need to streamline the regulatory processes associated with approving new public works projects, which are strangling this country and the various state and local governments who have to deal with them.

He did so at an April 4 White House briefing, and held up a chart with help from his infrastructure aide, D.J. Gribbin, a Leesburg resident and long-time advocate for public-private partnerships for highways.

The president even noted that the Obama stimulus of 2009 “didn’t build anything.” Yes, $30 billion of some $800 billion was pumped into supposed “shovel ready transportation projects, but because neither Obama nor Congress implemented any regulatory streamlining, 90 percent of the money went into road paving, as that was the only thing that was “shovel ready.”

In some states, USDOT says, 25 percent of the cost of a highway project involves just the planning stages. The non-partisan institute Common Good issued a 2015 report noting that “a six-year delay in starting construction on public projects costs the nation over $3.7 trillion, including the costs of prolonged inefficiencies and unnecessary pollution.”

So, if the president’s plan includes changing onerous federal environmental regulations and review times, it’s worth it for the long haul because then, the time and cost of building FUTURE projects will decrease and help the economy.
Time is money. Seattle-based INRIX and the Centre for Economics and Business Research reported in 2013 traffic congestion cost Americans $124 billion in direct and indirect losses, this number will rise to $186 billion in 2030 if not money. See the Forbes magazine article on the subject.
So, is $1 trillion worth it for our economy? The White House Council of Economic Advisers (CEA) once estimated that every $1 billion in Federal highway and transit investment support 13,000 jobs for one year. Some estimates show as high as 27,000 jobs.

Let us not forget the “Forgotten Men And Women” Trump was elected to help and who were severely screwed by Bill Clinton’s decision to sign NAFTA in 1993 and bring China into the World Trade Organization in 2000, thus costing a combined loss of 4 million manufacturing jobs. And, frankly, George W. Bush didn’t help these folks much either.
But much of the need for highway and transit investment and airport expansion is NOT in the rural areas. So, the infrastructure proposal could be helpful to the rural “Forgotten” with its emphasis on bringing broadband to rural areas and upgrading power stations.

It also might help Coal Country, where (despite Trump’s laudatory effort to end onerous Climate Change red tape), the coal industry is but 74,000 jobs nationwide. Coal is hurting not just due to Obama but the growing viability of more-competitive energy sources, notably natural gas.

The alternative to NOT making this kind of infrastructure investment is continued dependency, where some 49% of the public are not paying taxes, largely because they subside on Social Security, Social Security Disability Income (SSDI), and other government programs.The Washington Post just published a profile of an Alabama man, who has given up on finding work since job opportunities in his area are limited, and he does not wish to move. The Post estimates of the 13 million Americans on disability, one-third live in rural areas.

We now spend $143 billion a year on SSDI alone, in large part due to liberalized rules starting in the 1980s that expanded the definition of “disabled” beyond physical conditions that kept one from working, such as anxiety and psychological disorders. Both the Post and CATO institute conclude that disability is now where chronically unemployed people land.
Getting those folks into the workforce and off SSDI, food stamps and other dependency programs is worth $1 trillion. However, this money will NOT HELP MUCH unless Congress steps in to change outdated environmental review laws, notably Section 4(f) of the 1966 law that created USDOT, and Sec. 404 of the Clean Water Act, which has pretty much empowered EPA, the Corps of Engineers and a number of federal agencies to block or slow down construction projects, and make them more costly.

I am sure environmental groups, preservationists, and Democrats will pounce, but President Trump should submit legislation in 2017 to update 4(f) to allow road and transit projects to be built without full-blown EIS documents, as long as they utilize new construction and tunneling technologies and modern performance standards to negate impacts. Alternatively, they can reference a comparable project approved by EIS previously.

Second, federal reviews of EIS documents and 404 permits should be limited to 90 days, or they lose their right to comment at all and a wetland or other permit can be approved. And again, a bridge over a body of water – if built according to standards or a previously approved project – should not require much of a review.

Third, Trump’s DOT can administratively make more transportation projects eligible for “category exclusions” from 4(f) so more-simpler “environmental assessments” can be submitted versus the EIS.

Finally, reforms are needed regarding utility relocation and FEMA flood plain rules, which are prime culprits in high costs and delays.

Failure to institute regulatory reform through legislation and administrative action will just doom Trump’s infrastructure plan to repeat the same mistakes of the 2009 Obama stimulus, and not provide the necessary investment in new facilities which will employ people and move our economy forward. Tax reform, better trade deals, standing up to Mexico and China, and throwing off the yoke of Obamacare are also part and parcel of the pro-growth Trump/Republican agenda.

Reid like many get sucked up into the myth that this money will actually make its way to the intended goal. It does not.

Why would you send 1.00 to dollar Washington to have them skim off .30 cents to fund the bureaucracy to turn around and give you back your .70 cents to build a road , bridge , or other such project.

It is like reaching over your head to scratch your ass . Terribly inefficient and a waste of money.

My guess is Reid is hoping that some of this money will make its way to WMATA under the Too Big to Fail banner , saving his reputation as having lied and sold his soul. When you are that guy who foisted upon the taxpayers the biggest generational blunder in LOCO history , taking positions that might rescue ones reputation becomes paramount. It works at times , however this blunder was so big this political obfuscation won’t work.

Sorry , Ken you have zero credibility.

I sincerely have a problem with infrastructure spending.
Speaking for my 32 years of experience the employmenr end of construction ,should we not first address the illegal employment .
These jobs should first and foremost be legal jobs?
It is deeply upsetting to see Contractors employ illegally then go on to throw out $25,000.00 to a Community Building to have their name on a community contributions plaque.
What kind of contributions are we actually netting?

Only thing worse than spend, spend, spend is cutting taxes to coincide, essentially putting the cost on our kids’ tab. How will the debt limit dance go now that it’s Trump and a Republican Congress dealing out the credit cards? How many Raytheon missiles will we need to generate one obfuscating crisis after another?

We need less government, not more, but Trump is a big spender who doesn’t mind flirting with bankruptcy. He’s been there and back quite a few times.

Both party’s do not mind putting student loan debt on their kids tabs????? Both Va. Tech and VCU have announced tutition hikes with impunity. Why don’t you ask just who it is that benefits from the national debt and student loan debt? Who is getting rich off the debt? Who borrowed money from the Fed at 0 % interest and loaned it back at over 3% interest by buying the debt?

Until we recognize and expose those who benefit from the $20 Trillion and even more in US debt, how can we possibly contain it? I’ll give you a hint, they are the same ones who were and are ultimately behind the destabilization of the middle-east, and our student loan debt. Know who they are?

Your writing indicates that you are drunk on liberalism. Blue Va. is where you need to be.

Jeanine, this site has obviously been hacked by the Democrats…..

Jeanine is allowing for the freedom of speech. Just because something is printed on TBE, does not mean that Jeanine or Steve Albertson, or any of the rest of TBE endorse it. But Jeanine does endorse free speech.

Jim – I agree with you 100% that the writer is dead wrong. We can’t afford 1 trillion in government spending. The Obama regime wasted too much money yearly on frivolous spending – everything from Obama Care to who knows what. But just because something is printed – that does not mean that the owner of the site agrees with what is being printed. Just that he/she is letting others express their right to use the 1st Amendment.

Ok, then why can he write for TBE and I cannot? Is it because I am to far right?

Great question. But you should ask our Fearless Leader Jeanine Martin and or Mr. Steve Albertson. I’m as far to the right of the ideological divide as one can be, and TBE occasionally publishes my articles. So I don’t think it’s ideology here. But again as I don’t speak for TBE – Jeanine/Steve/et al can answer much better than moi