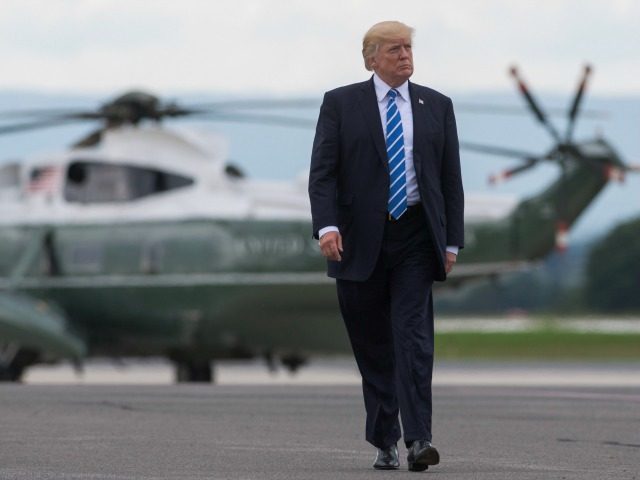 Why talk about DACA when the RAISE Act ending chain migration still has not passed?

“Chain migration cannot be allowed to be part of any legislation on immigration!”

That was President Donald Trump on Twitter on Sept. 15 throwing out another condition to his calls for Congress to legalize former President Barack Obama’s Deferred Action on Childhood Arrivals (DACA) that allowed illegal immigrants brought to the U.S. as minors to remain.

The stipulation came a day after Trump, speaking in Ft. Myers, Fla. said, “Very important is the wall. We have to be sure the wall isn’t obstructed because without the wall I wouldn’t do anything… It doesn’t have to be here but they can’t obstruct the wall if its in a budget or anything else” and “If there’s not a wall, we’re doing nothing” and “We’re not looking at citizenship. We’re not looking at amnesty. We’re looking at allowing people to stay here…”

In addition, Trump had assured his followers on Twitter on Sept. 14 that “No deal was made last night on DACA. Massive border security would have to be agreed to in exchange for consent.”

So far, then, Trump’s conditions for any deal on DACA are four-fold: 1) No chain migration allowing DACA extended relatives access to the U.S.; 2) No path to citizenship for DACA illegal immigrants; 3) A boost to border security must be included; and 4) The wall must be built in the budget.

That is far from a done deal, since it is not at all clear that House and Senate Democrats — or Republican leaders such as House Speaker Paul Ryan and Senate Majority Leader Mitch McConnell (R-Ky.) for that matter — have agreed to any of it.

Trump’s conditions came after House Minority Leader Nancy Pelosi (D-Calif.) and Senate Minority Leader Chuck Schumer (D-N.Y.) rushed to the microphones to declare that a deal had been had with Trump. That DACA would go through without any preconditions. The remainder of the week was spent by Trump, the White House and Republican Congressional leaders disabusing anyone of the notion that the deal was done.

Now, either, Democrats overstated what had been agreed to. Or, Trump is walking back what was turning out to be a bad, bad deal.

Either way, observed President of Americans for Limited Government Rick Manning in a statement issued on Sept. 14, “this could wind up being a productive conversation about how to enforce the nation’s laws and reform a broken system.”

Manning called on Trump to add one more condition to his negotiation, which is to pass the RAISE Act. “The paradigm must be to pass the RAISE Act, end chain migration, move to a merit-based system, build the wall and secure the border first as the concrete foundation of a solution to the illegal immigration problem.”

Manning added, “The American people elected President Donald Trump to enforce the nation’s immigration laws, secure the border and to end chain migration in the immigration system. To put America and Americans first.” Passing the RAISE Act would do that.

The RAISE Act, proposed by Sens. Tom Cotton (R-Ark.) and David Perdue (R-Ga.) would, according to the bill’s description by the White House, “replaces the current permanent employment-visa framework with a skills-based system that rewards applicants based on their individual merit… reduces overall immigration numbers to limit low-skilled and unskilled labor entering the United States… prioritizes immediate family members of United States residents, including spouses and minor children, but ends preferences for extended family members and adult children… [and] eliminates the outdated Diversity Visa lottery system.”

That would be an absolute game-changer. Which is why it should be the bare minimum of any legislation to do with immigration considered by Congress.

The President is right not to allow chain migration to be a part of his deal on DACA. But that should not only mean for DACA illegal immigrants, if they are allowed by Congress to remain, who would be blocked from bringing their extended families. Instead, the entirety of chain migration should be ended, and a skills-based system put in its place by passing the RAISE Act.

Besides that, Trump’s call for the southern border wall to be built, enhanced border security and no path to citizenship for illegal immigrants are critical, common-sense stances that would affirm the mandate he received from the American people in 2016 to address these issues.

But here is the most critical condition of all. These things need to happen before any consideration of DACA or any other illegal immigrants in the U.S.

Amnesty of any kind cannot be put before fixing the broken system and enforcing the law. The American people got bamboozled by similar broken promises in 1986. That can never be allowed to happen again.

Granted, Congress is needed to appropriate funds for the wall and border security, and to pass the RAISE Act. And Trump appears to recognize that he can use DACA as leverage to get these things he promised. It will be up to Trump’s supporters to decide, if achieved, if that’s good enough. But an honest process on this issue has to include the President’s priorities. Otherwise, there shouldn’t be any deal.

As President Trump is quickly learning, the debate on DACA is fraught with pitfalls. Trump made big promises in 2016 that he would put the American people first when it came to immigration policy. At a minimum, that can only mean passing the RAISE Act, ending chain migration, securing the border and building the wall. Other considerations like DACA should only come later.

Why talk about DACA when the RAISE Act ending chain migration still has not passed? was last modified: September 18th, 2017 by Guest Contributor Robert Romano

There is absolutely no need to worry or to be happy that “our” government that we have now is going to all of a sudden solve any problem, period. End of story.

Capitalism, a free press owned by thieves, crooks, and liars, coupled will freedom do not support problem solving. We now pay nearly $1.5 BILLION each day in interest alone.

Why not lets make Kum-ba-ya our national anthem??

The moral of the story is that the government doesn’t solve problems, they only exacerbate them.

Oh, and they also create new ones.

Yes, our Government does create problems and the Goverment could prevent problems. The Goverment I speak of is the elected ones.
So let’s flood the market with counterfeit money , then cry to make counterfeit money legal and say to the public it is your responsibility to determine what is not genuine.
And just what is “unskilled labor”?
Are we in Va. expensing tax payer dollars to educate students in our High Schools and Community Colleges for the so called “unskilled positions”?
I see that the Tidewater Builders Association website has a Trade School with job placement , are those “unskilled”?
Not to enforce labor law is corrupt!
To give a free pass to foreigners than say “we need immigration reform” with our labor enforcement is total BS!
Just yesterday literally in my back yard of Thomas Jeffersons Poplar Forest home 30 “genuine dreamers” received U.S. Citizenship.
Va. desperately needs labor enforcement reform.
Who is up for that?
1) me
2) Northam????
3)Gillespie????
4)?
5)?

Is yours a call to end govt involvement with borders? if so, I find it an intriguing, free market proposal worthy of discussion. Govt is a poor filter and an even worse gatekeeper.