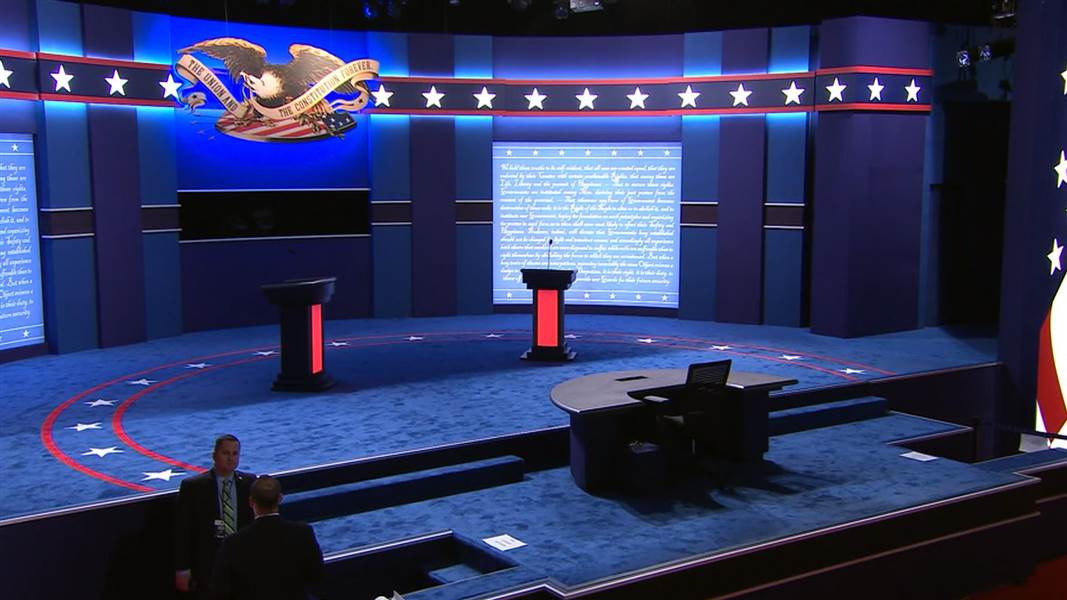 Why These Debates Are Dangerous

I will watch tonight’s debate with fear and trembling. Why? What is so terrifying about a debate?

I am petrified by the idea that a majority of Americans will tune-in to politics for the first time in four years to decide who they will be voting for in November. Not only have the American People been mired in media misinformation over the last 18 months, there are actually voting-Americans who have neither acquired facts nor lies, as they have not been paying attention. These Presidential debates will shape the opinions of millions of voters; yet, what real policies can we expect these candidates to roll out or explain to us tonight?

The average American voter will not know anything about their down ballots before showing up to the polls. A majority of them will simply vote for a political party. A general knowledge about the current domestic, foreign, economic and social policies currently being exercised in the United States, and a general knowledge about the changes, reforms, or deviations from these policies, that these two politicians represent, will be lacking amongst the overwhelming majority of Americans viewing the debate this evening.

Americans are busy; most of them struggling with great difficulty to manage the priorities overwhelming their personal and professional lives. The amount of time and energy (not to mention study) required to attain even an elementary understanding of government, of our legislative substance and process, of our bureaucracy and all its meddling, our economy, our markets, and the balance and relationships between local, state and federal governments is burdensome. To expect Americans to be informed would be irrational. However, these utterly uninformed citizens will vote in November for reasons as asinine as to see the first female President or to elect that rich guy on television who gets to say, “You’re Fired.”

Our government’s leaders and its bureaucrats, as well as our local politicians, understand that there are few people who have even the slightest idea what is going on within their representative republic (now bordering on a corporate oligarchy).  Therefore, they will always be more deferential to those who are paying attention, who stay informed, and who are invested in some area of government (politically or economically). On the other hand, they will continue to employ illusion, misdirection, and outright dishonesty to manipulate and earn the votes of the general public.

Tonight, we will witness representatives of two political parties try their damnedest to manipulate the American People. They will make promises that they cannot keep, artificially raising the expectations of a people who don’t know better. They will promise to do things as President that are not within the purview of the executive office. They will overstate the impact of some problems, while minimizing the impact of others. They will try to demonize each other personally, since studies have shown that Americans want to vote for a candidate with whom they can identify personally. They will ignore the most dire topics for which they have no solutions and they will narrow in on unimportant topics, the solutions for which promise far more than they can deliver.

While all of this is going on, we will have a panel of moderators who will be attempting to make history by affecting the outcome of the election. One clever question capable of unraveling a candidate’s temperament, and the journalist who asked it will have cemented a future career in political journalism. These debates are now (and have been for decades) just as much about the moderators and their networks as they are about the candidates themselves. How aware will tonight’s audience be of the self-interest of the moderators?

For all these misgivings, I understand that tonight is inevitable and that, in this country, we allow the least informed members of our society to select the most important members of our government. If there is any mystery as to why we are constantly forced to choose between two candidates we cannot stand, one might think to question the form of government which make these candidates possible.

Regardless which candidate you support, your candidate will have multiple opportunities to implode their whole campaign this evening. One wrong facial expression. One wrong answer. One demonstration of ignorance. A candidate can rise or fall five points in the polls on the basis of what could be considered nothing more than a theatrical performance. Heading into October, five points is the election.

If any of you were excited about the debate this evening, I hope I have adequately shared my fear, trembling and misery (which, as ever, loves company) with you. There is still time to refill your Xanax prescription before tonight’s event.

Why These Debates Are Dangerous was last modified: September 26th, 2016 by Steven Brodie Tucker

This is the circus of Bread and Circuses.

Two may enter one may leave.

Watch Hillary’s eyes, for while a woman may lie with her lips.. her googly eyes will make you spit up your popcorn.

I really like my candidate and his chances of becoming President.

And for Jeanine, I base that statement on the many posting Jonathan has made here, FB and elsewhere where he bashes everyone different from himself – quite deplorable

Being discriminating does not make you racist, it’s kinda essential for debate, logic, and reason.

For example, I discrimate against the stupid. People who throw around perjoratives like racist are stupid. But not all stupid people are racist. It takes discrimination to puzzle stuff like this out.

I’m just as DEPLORABLE as Mr. Erickson, and while we may be discriminating, we are in no way racist (aside from pro-human uber all semi, demi, sub, and protos.)

Except that Jonathan is in record of demeaning Muslims for being Muslim, not terrorists; blacks for being black, not thugs; women for being women and everyone else not white male christians. Pick you word. These days racism is used to cover all sorts of hate against others for who they are, not for their actions

Need to bring up the quote and context for women and blacks otherwise I call you as 1/3 correct!

And so the word racist loses its meaning and significance.

It’s a free country (for now), Muslims can hate and desire the death or conversion of non-Muslims, black thugs can claim only their lives matter, women can always say and do anything they damn well please, and white male Christians are the go-to scapegoats for everything else — it’s always their fault.

By your definition and practice, I’m a racist because I’m hating all Muslims, blacks, women, and white male Christians who wish to kill me and/or infringe my liberty — I’m pretty sure that includes you.

I’m also fairly certain that you don’t care and are able to still sleep at nights.

So it goes in America (for now)

wait, are you accusing me of wishing to kill you? A bit egotistical on your part – I don’t give a hoot about you. Why do you think anyone cares enough about you to want this?

“And/or infringe my liberty”

And quit with the owl shaming!

seize them and slay them wherever you find them

Last night didn’t go well for him. It was as I feared, if not worse.

Romney for all his faults won the first debate with Obama. No one can say Trump won last night and if that was his best effort then he should skip the next 2 debates.

this is your hero and savior? http://www.politicususa.com/2016/09/27/donald-trump-claims-lost-debate-mic.html

Did I miss Mitt’s election?

Based on your ridiculous hysteria, I’d suggest that you take some Midol.

Are you hoping fewer people will watch the debate? As a Hillary supporter I can understand why you feel that way.

You’re lying, Jeanine. I’m not a Hillary supporter and you should know that. I dislike both candidates.

Hold yourself to that “no personal insult” standard.