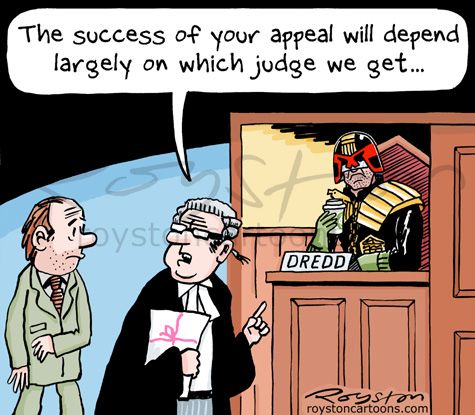 In the not-too-distant past, lower-court judges were behind-the-scenes figures who tended to keep a low profile, except when they presided over sensational murder-trials or arguments on some hot topics of the day. The Scopes Monkey Trial (1925) and the OJ Simpson murder trial (1994) were in that vein. Otherwise, the average Man (or Woman) on the Street would have been hard-pressed to name a single lower-court judge. Supreme Court Justices were better known, but few of us could name all nine. Judges were not really in the mainstream of public awareness.

But things are different in the Age of Trump. Lower-court judges have discovered a new path to fame and rewarding sinecures on the big-bucks liberal lecture-circuit. Today, whenever anyone disagrees with one of President Trump’s Executive Orders, or a policy he has established, or an enforcement-directive he has issued to a governmental agency, some lower-court judge is dead-certain to issue a judicial stay or block the executive’s action entirely. In a remarkable break with the past, virtually any presidential policy is now subject to judicial review. A thousand judicial “inspectors general” are standing at the ready to keep the president in line.

Sometimes the newly famous judge cites a provision of the U. S. Constitution as basis for his ruling. But more often than not he will say the president’s order harms citizens of certain states, or reveals “racial animus,” or just “isn’t who we are,” etc. In other words, he doesn’t care for the cut of Mr. Trump’s jib. After appeals by Mr. Trump’s attorneys, such rulings are eventually overturned by the Supreme Court. But the desired effect of slowing down the Trump-train is achieved. That judge’s place of honor in the pantheon of liberal heroes is assured, and a door is opened to a possible Supreme Court appointment by a future Democratic administration. (And – quien sabe? – perhaps even to the presidency, if The Great Mentioner should beckon.) 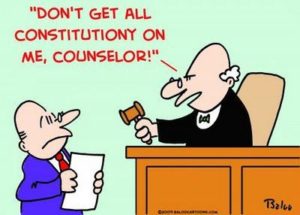 All this is great sport for Deep State Dems and Never-Trump Republicans, besides being vastly entertaining for the liberal media and a real gas for the judges who have emerged from the shadows. But serious patriots should be concerned and not at all amused. Dangerous precedents are being established here, and sensible people of every political stripe should decry this practice of throwing a judicial spanner into the gears of government whenever someone dislikes how things are going. It’s like knocking over the game-board when you’re losing – except that governance is neither entertainment nor a game. There are high stakes here for the country, and we need to get the kids away from the levers of power and send them outside to play.

Democrats are quick to note that Republicans started all this by suing to block orders issued by President Obama. “Turnabout is fair play,” they argue, in defending their attempts to block Mr. Trump’s executive orders on immigration. They have a point, but it’s not the only point to be made. In fact, the Supreme Court has reversed all lower court stoppages of Mr. Trump’s immigration orders, ruling that authority over who can enter the country clearly belongs to the president – as stipulated by the Constitution and by acts of Congress. Disagreeing with the president on these matters is certainly the right of every citizen, but it does not constitute valid grounds for a judge to block legal presidential actions.

Mr. Obama, on the other hand, took actions which the courts found to be outside his legitimate powers. Following the 2010 explosion of the British Petroleum oil-drilling platform and resultant oil-spill in the Gulf of Mexico, Mr. Obama ordered stoppage of all offshore drilling in the Gulf. Oil-interests sued to overturn the order. And after reviewing the facts and science in the case, the U.S. District Court for the Eastern District of Louisiana found that Obama’s drilling ban was an “arbitrary and capricious abuse of executive authority.” The court ordered the ban cancelled.

Instead of following the law and allowing Gulf drilling to resume, however, Mr. Obama issued a new moratorium that featured only minor technical changes from the first. But intense bipartisan political pressure from Louisiana Senators David Vitter, a Republican, and Mary Landrieu, a Democrat, prompted the president to lift the moratorium in October 2010.

The Supreme Court also stopped Mr. Obama’s unilateral grant of legal residency to millions of aliens currently residing in the country illegally. The Court contained only eight justices at the time (January 2016), and was evenly divided (4-4) on whether the president could change a law enacted by Congress that governed granting legal status to immigrants. Consequently, the matter was returned to the District Court which had originally ruled against Mr. Obama on that question.

You don’t need to be a Constitutional juris doctor to see that our republic was not designed to operate in this slapdash way. If we continue on this path, how long will it be before presidential directives to the military are challenged in court and reviewed by judges who have never handled a weapon and who think bazooka is a bubble gum? We simply can’t go on like this. If we don’t cut it out, our whole government structure will come apart at the seams.

The president’s political opponents know this, of course. They’re evidently willing to permit complete collapse of coherent governance if that will discredit Mr. Trump and get him evicted, so they can resume power. It’s another arm of the “soft coup” being orchestrated by Deep State denizens who seem willing to go to any lengths, including actual harm to the country, to remove their hated nemesis.

Since Mr. Trump’s inauguration, “impeachment” has been hyped by Talking Heads in endless TV “round-table” discussions. But that bright promise faded, once clueless reporters realized that impeachment by the House is just the “indictment” phase, and that the president can be removed only if 2/3 of the Senate votes for conviction. With that prospect seen as unlikely, there is new wild talk (among people who should know better) of indictment and trial of the president in a civilian court for obstruction of justice or some other charge. Orgasmic Deep-Staters are dreaming cannabis-dreams of seeing the president “frog-marched” out of the White House, on his way to the Big House.

Yowzah! What lower court judge wouldn’t jump at the once-in-a-lifetime chance to preside over a trial of a sitting president? It would be a judicial “rapture.” Leftists would be thanking the Great Whoever for letting us see such a day!

Except that such a day will never come. I regret to disclose that a sitting president cannot be arrested or detained by ordinary law-enforcement arms – no, not even by the FBI. If this were possible, small-town mayors or sheriffs all over would try for instant fame by stopping the presidential motorcade and locking the Big Guy in the local hoosegow. I can assure the pot-smokers that any such attempt would be opposed with “extreme prejudice” by the Secret Service.

Could the FBI do it, Director Jim Comey would have headed Mr. Trump off at the pass by sending armed agents to arrest the president before he (Comey) could be fired. If we ever operate in such a fashion, we shall have reached the absolute nadir of Banana Republic-ism.

The lower courts obviously share blame for our current disorder by accepting fatuous cases which they must know lack merit. Somehow they must be persuaded to stop doing so. I’m not sure how to accomplish that persuasion, but a summit between the president, the leaders of both houses of Congress, and the Chief Justice of the Supreme Court might be a good place to start.

Democrats will undoubtedly favor restoration of good order, once one of their own has won the presidency. But we all need to stop looking at things of this importance through partisan glasses. Unless we want our federal system to become a madhouse run by the inmates, we need to get together and get cracking on this, without delay.

Amen! Conservative judges generally follow what the law says and let the legislatures decide the political issues. It’s the liberal judges who like to implement their political preferences as constitutional mandates with very flimsy references to the actual text of the Constitution.

I guess you missed Woody’s point. Again, I quote the author with whom you claim to agree: “we all need to stop looking at things of this importance through partisan glasses” — Do you think your Amen! comment came close to his words, or did it simply ignore them completely?

Are you saying that liberal and conservative are partisan labels? How else do you propose to evaluate the laws? Feelings??

Yes, they are labels, and therefore partisan. Partisan refers to a cause or a party,, basically that which segments us.

When neither are on your side, pound on the table. We get lots of that these days and Woody brings my agreement: Enough!

Actually, it is you who missed the point. Woody is saying that if justice were truly blind, it would favor conservatives by restoring judicial integrity, because most of the judges who abuse their position are liberal. There is no conservative equivalent to the liberal 9th circuit who routinely get overturned by the Supreme court. Judicial abuse has been disproportionately liberal. So I agree with Chad, and say Amen, judges should focus on the law blindly, which would inevitably be good for conservatives.

Frank, your comment must have Scalia rolling in his grave. Like the good Justice, may he RIP, I’m sticking with the original text of Woody’s comment and dispensing with your re-interpretation.

Let’s repeat it together, such that you might find clarity on re-examination of it: “we all need to stop looking at things of this importance through partisan glasses”.

The way you got to your comment from the original text would make both the 9th Circuit and the mythical HoC Frank Underwood proud. Spin, spin, spin like a lathe.

I’m not surprised in the least. Reading comprehension has been a persistent problem for you, but go ahead and stick with it.

Frank, your “alligator mouth is getting the better of your piss ant brain.” Do your enhanced reading comprehension skills give you a clue as to where that line comes from and why it applies here?

Yes, I can see your problem. Is that why you post so often?

You’ve got me beat on quantity, Frank. And you’re twice as mean-spirited and closed-minded. Sui generis, eh?

Great advice, well-put: “we all need to stop looking at things of this importance through partisan glasses”