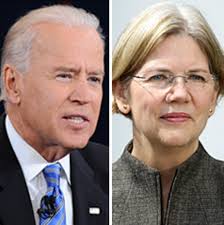 Will Biden Chose Elizabeth Warren for his Veep and Will Obama Endorse the Ticket?

There is more and more speculation that Joe Biden will enter the race for President within the next few weeks. Over the weekend Joe Biden met with the darling of the far left, Elizabeth Warren.

That meeting set off a whole new round of rumors. The most common rumor being Biden will choose Elizabeth Warren as his Vice President while at the same time he promises to be a one term President.  Warren would then slide right into the Presidency.  Should Biden become President at age 73 he will be the oldest President to take office. At 69 Ronald Reagan is the now the oldest when inaugurated. Warren isn’t a youngster.  She’s 66 and would be 71 if she were to run on 2020.  There are other problems with a Biden/Warren ticket. Her supporters don’t particularly like Biden, he’s too much of an establishment guy.  He’s not as far left as her supporters would like.

Which brings us to Obama. Of course he would like his ‘legacy’ to be carried on. From his point of view, Biden is a better standard bearer than Hillary with her multiple problems. Biden could be Obama’s third term. On Monday Josh Earnest seemed to encourage the speculation that Obama may weigh in on the race for President,

Earnest also noted that Obama has said that naming Biden vice president was the “smartest decision he’d ever made in politics.”

More on Biden’s decision to enter the race here.

Will Biden Chose Elizabeth Warren for his Veep and Will Obama Endorse the Ticket? was last modified: August 24th, 2015 by Jeanine Martin

Hillary is sliding so fast. The Democrats love crazy Bernie but know he can’t win so what else do they have? Biden is looking pretty good compared to the man who taxed the rain.

I can see the lede at Ace of Spades now: “Noted paste-eater Joe Biden chooses Fauxcahontas as running mate…”

Yes he’ll run, yes she’ll be VP, and yes Obama will endorse them.