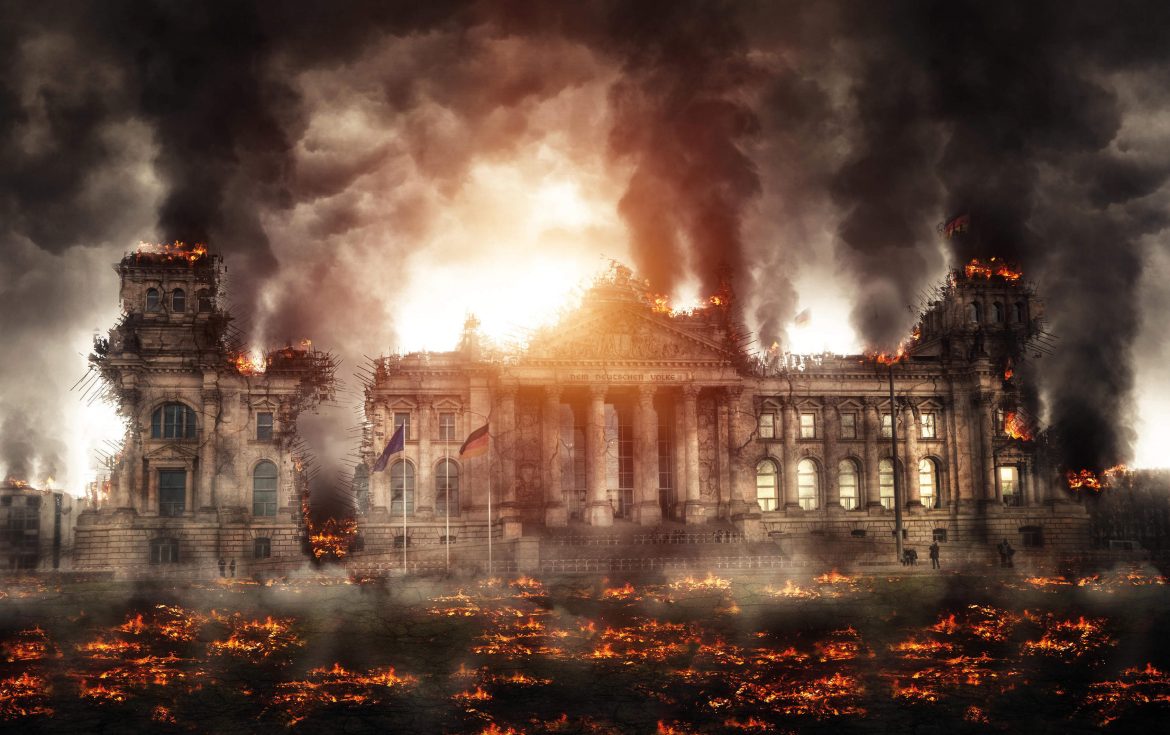 Will Democrats use the Jan. 6 assault on the Capitol as the Nazis used the 1933 'Reichstag Fire' to suppress their opponents?

Will Democrats use mob assault of Capitol as a ‘Reichstag Fire’ to seize more power, crimp conservative views?

“You never want a good crisis to go to waste”; Chase, Van Cleave part of the ‘purge’

I detest it when liberals use the “Hitler” analogy to describe us conservatives, but given the reaction on Capitol Hill and Leftist officialdom (i.e. the media) to the Jan. 6 mob assault on the U.S. Capitol, which resulted in five deaths, three of them medical related, it seems this sad heinous act by a minority of people attending the Stop the Steal rally – supported by President Trump and his backers – is going to become a “Reichstag Fire”  of sorts for Democrats to seize more power to stifle right wing views and organizations as Hitler did with the 1933 “Enabling Acts.”

Not only was Trump permanently banned on Twitter and lost his Facebook and Instagram accounts, but the unfiltered Parler social media site was removed from Amazon and Apple .

The FBI is scouring the country to arrest more people who broke windows, smashed through doors and created violent mayhem at the Capitol.  Liberal media and electeds want Trump, his son, Don Jr., lawyer and former NYC Mayor Rudy Giuliani, and Rep. Mo Brooks, prosecuted for  “inciting riots” – a federal offense.  Liberals and Republicans are ganging up on Sens. Josh Hawley and Ted Cruz for pushing hard to have Congress overturn the Electoral College results Nov. 6.  A number of other GOP electeds are under the microscope, too.

Liberal commentators, of course, are comparing the Jan. 6 rally and march to the Capitol as a Nuremberg rally gone wild, but in my view, the Left is about to embark on an ethnic cleansing of conservatives, akin to Hitler’s  “Night of the Long Knives”  or Stalin’s purges.

As I noted in this TBE piece,  white supremacist and wacko groups like Qanon do not have many of their members with political power – but radical socialists do, who believe “hate speech” needs to be curtailed, if not outlawed.  Democrats control Washington now and may feel they have the wind to their backs to institute government control over conservative thought and groups.

So, here are some policies that could be in the offing from Liberaldom:

1. Expanding the definition of “domestic terrorism” to U.S. citizens: Liberals argue the current law only allows such charges to be brought against foreign terrorists operating on U.S. soil. There are serious discussions of this in Congress and in liberal media.  Bills were offered in 2019 to accomplish this, but died, and Sen. Richard Durbin (D-IL) said he is re-introducing it.   Democrats also want to put the Capitol Hill assailants on No fly lists, which appears to be happening.

3.  Reviving the Fairness Doctrine to cut down on conservative talk radio and Fox, Newsmax and One America News slanted broadcasts.  Democrats have long wanted to revive this FCC rule, which lasted from 1949 to 1987 until it was killed by the Reagan administration.  Rep. Tulsi Gabbard (D) introduced a bill most recently in 2019 to revive the Fairness Doctrine and it died.  There are severe ramifications for this, which you can read here.   and CATO’s 2019 take on it here:

4.  Repealing Sec. 230 may gain steam:  Congress was under pressure to repeal Sec. 230 of the 1996 telecommunications act in order to allow social media companies to be liable for their content.  The thought was that this would compel Facebook, Twitter, etc. to be more fair and balanced. However, as this article claims,  it would do nothing of the sort and just infringe on First Amendment rights, as would reinstating the Fairness Doctrine. But liberals know that these companies are controlled by liberals and so, there’s less of a risk of Leftist content being removed.

5.  Rooting out Qanon and “alt right groups”:  The FBI claimed in a report in 2019 that “conspiracy theory groups”  “ very likely will emerge, spread, and evolve in the modern information marketplace, occasionally driving both groups and individual extremists to carry out criminal or violent acts,” A few of the rioters arrested at the Capitol were Qanon devotees, including the much-photographed Jake Angeli (Buffalo man).

7.  Making ‘critical race theory’ diversity training mandatory on the private sector:  President Trump ended “diversity training” for federal workers that used  “critical race theory” as its underpinning.  I believe President Biden will bring it back and there will be calls to mandate it in the private sector.  This is one step toward “thought control” and “reeducation camps.”

8.  Use of the “Insurrection Act:”  Trump was lambasted by his own military advisers and past Secretaries of Defense for contemplating using this law against BLM and ANTIFA rioters.  However, they are all anti-Trump.  My guess is Biden will invoke it if there’s another assault on government by the “Far Right,” and the media will be his apologists.

Perhaps I am dystopic, but the Capitol breach was like no other in U.S. history on federal grounds and will be the crisis liberals use to clamp down on free speech.

Although Democrats have a narrow majority in the House and 50-50 in the Senate — I am predicting either Sens. Susan Collins or Lisa Murkowski will pull a “Jim Jeffords”   and give the Democrats a majority—liberals have such hubris because their most extreme actions are coddled by the media and intelligentsia in this nation, and liberals believe they have demographic shifts on their side.

Liberalized voting this year and the prospect of renewed open borders make conservatives fear their country is about to be lost.

So, where do we go from here?

I mentioned in my column about zealotry that I would propose some solutions.   I am still working on those.  But unfortunately, our party is out of power in DC.

We can hope and pray our independent judiciary will support the Constitution and prevent the Democrats from enacting the concepts listed above, but judges are in partisan camps, too, it seems.  The “Night of the Long Knives” has only just begun.