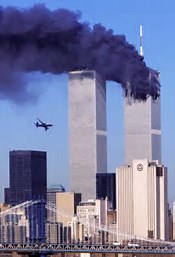 Will it ever be Over?

Today’s observances of the sixteenth anniversary of the 9/11 attacks recall many brave and heroic deeds of that day. We now mark the date as a watershed in our history. Millions of us will always recall where we were when we heard the news – or, in some cases, even witnessed the terrible events.

My sister recalled hearing the doomed plane, on that fateful morning, as it flew directly over her home in North Springfield, Virginia – just 3 miles from the Pentagon, as the crow flies.

“I was still at home, because I was late getting to work. I knew something was wrong because the plane was too low,” she said. “Planes often fly over, but never that low.” Soon after, she saw the black smoke.

My own memory lacks this immediacy to the events. Although we live in Northern Virginia, my wife and I were actually vacationing at the Delaware seashore during the week of September 11, 2001. Nevertheless, the horrific images – shown on a TV at the fitness center I was visiting – are burned into my mind’s eye. Dumbstruck, we watched the disaster unfold.

A colleague who lived in Woodbridge, VA, south of DC, said two ladies from his church were killed in the attack on the Pentagon. And neighbors from our previous home in Atlantic Highlands said the marina was turned into a triage unit to help injured and dust- and oil-covered escapees who had been ferried over from the disaster site. Marina boaters took some to homes as distant as Delaware.

Sixteen years on from that dreadful day, there’s not a lot more to say about those who courageously resisted our attackers by crashing a plane (and dying) to keep it from hitting the White House or the Capitol, or about other brave people who perished trying to help those trapped in the doomed Towers. Today a whole new generation of young people have no memory of those searing events. Parents might tell them what happened, but the horror of the day isn’t burned into their minds, as it is for us who are older.

Others do still recall the attacks, but have somehow recast them in their memories for political advantage or some other purpose. For one reason or another they blame America for “inviting” or causing the attacks: e.g., societal wickedness; historical mistreatment of minorities; imperial aggression; stealing other nations’ resources; insensitivity toward Muslims; etc., etc. After any attack on our nation such people always pop up – like the angry college girl who snapped: “Well, no wonder the Japanese attacked us at Pearl Harbor, after we dropped the atomic bomb on them…” (A response so absurd that no rejoinder is remotely possible.)

This blame-game has now extended to natural disasters. It started with Democrats and the media (but I repeat myself) thumping George W. Bush for his “slow” provision of disaster-relief after Hurricane Katrina, in 2005. But it has gone far beyond that now. Activists heap blame for hurricanes’ occurrence on politicians who oppose draconian economic measures to “prevent” climate-change. President Trump is Target A in environmentalists’ sights. After rejecting the Paris Climate Agreement, he was bound to be blamed for any future hurricanes. And as luck would have it, Harvey and Irma have hit us with a one-two punch this year. There is even wild talk of impeaching Mr. Trump for his environmental sins. (After all, if they aren’t “high crimes,” what is?)

This environmental jihad against the president and all those who oppose wrecking the world’s greatest economy to “save the planet” has followed close on the heels of much-hyped protests by masked gangs that blame most of society’s ills, real or imagined, on a few statues of long-forgotten political/military figures who acted honorably – as they saw it then – in a cause and a war, a century-and-a-half ago, that few of us, in our more “enlightened” age, can begin to understand. Those all-but-forgotten actors are part of our history – however noble (or not) as we might now regard it. Is it really useful for us, as a nation of free people, to dismantle all tangible reminders of what went down long before our time and made us what we are?

No doubt other gangs of history-revisionists will soon attack our participation in the great conflict that defeated Nazi and Japanese aggression and freed millions – including the German and Japanese populations – from oppression, enslavement, and unspeakable, industrial-scale killing. Americans of a time that only a few ninety-year-olds or centenarians can accurately recall will be accused of racism, war-mongering, greed and oppression by numbskulls who vow endless agitation, disruption and violence until every last statue or memorial of our participation in that conflict is removed and remembered no more. And those of us who don’t want those memorials eradicated will be smeared with the same vile slander. Who could foresee such a tumultuous era?

This is the “new wave” of American politics, and it will continue as long as the people tolerate it and some political faction or party finds it useful. It’s a safe bet that those making the most noise over Robert E. Lee, Stonewall Jackson, Jefferson Davis, or the Confederate battle-flag know little about those times, and care even less. Their campaign is not about the Civil War, slavery, racism, helping minorities, etc. Nor is the radical campaign to destroy American industry and modern living meant to “save the earth” or any such rubbish. (The eco-agitators expect to be riding in limos and smoking Tijuana Gold while the rest of us are pedaling rickshaws.) These movements are mere tools to achieve the activists’ true objective: disruption and ultimate destabilization of American society.

But why would they want to do that? you might ask. Hasn’t America – with all its flaws – done more to help minorities and oppressed ethnic groups than any nation in history? Isn’t our economy the greatest provider of opportunity for ordinary people the world has ever seen? How can destabilizing and impoverishing the country, and making it ungovernable be in anyone’s best interests? In August, blogger Jeremiah Johnson wrote his answer:

“The Left is fueling and funding tensions in order to exacerbate them and cause a revolution. In the middle of this, the President is being blamed and threatened with impeachment. The root of it is this: the attempt to destabilize the country and cause anarchy. Black Americans are being used as the vehicle for the destabilization…a vehicle by the oligarchs, such as Soros. We are right around the corner from a Civil War…”

This is a page right out of the 1971 Saul Alinsky playbook, Rules for Radicals, which details how the left can achieve its aims by destabilizing a society, turning its factions against each other, fomenting a revolution, making people desperate, and then riding in to “save” the country from itself. To accomplish this, every remembrance of the past must be eliminated, every contrary voice must be silenced, and every untoward current event must be twisted and hyped to create disruption, blame and enmity.

There’s more to say about this, but we’ll leave it there for now. On this day of somber remembrance, let’s give a passing thought to how much we have changed since September 10, 2001. We’ll never be the same, but we need to wake up to what is happening and who is causing it.

“Every record has been destroyed or falsified, every book has been rewritten, every picture has been repainted, every statue and street building has been renamed, every date has been altered…History has stopped. Nothing exists except the endless present in which the party is always right.” (1984 by George Orwell)

Will it ever be Over? was last modified: September 11th, 2017 by Woody Zimmerman
28 comments