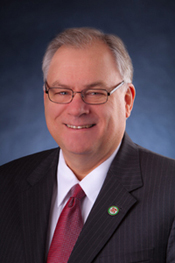 Chairman of the Board Scott York announced in April 2014 that he would run for re-election this year. In January, hours after Charlie King filed to run for Chairman, Scott York changed his mind and announced that he would not run for chair. Then in March it seemed York had not yet decided if he’s running again or not, saying “I reserve the right to change my mind”.  It’s also common for Scott York to run as an Independent. He has done it three times.

Yesterday Chairman Scott York endorsed Mike Chapman for Sheriff, well after the filing deadline for delegates to the convention in May. Few delegate minds (if any) will be changed by this endorsement.

So why did York do it now? Has Scott York succumbed to pressure from the developers and some members of the Board of Supervisors to run again as an Independent? Has Mike Chapman seen the handwriting on the wall, realizing that he will lose the convention because he’s very unpopular among deputies and Republicans in Loudoun? Have York and Chapman come together to support each other in their runs as Independents?

More Evidence Chairman Scott York Will Run as an Independent - The Bull Elephant August 9, 2015 at 6:31 pm

[…] we reported Loudoun’s Chairman of the Board and the Sheriff are likely to team up and run as Independents, as evidenced by Scott York’s recent, late, endorsement of Sheriff Mike Chapman. More […]

That was posted on The Bull Elephant back in February 2015: http://thebullelephant.com/uva-survey-shows-top-ranks-for-loudoun-emergency-services-and-sheriffs-office/

Comments suggesting that the public is dissatisfied with the Sheriff’s department are baseless.

Not the entire public, just those who work under Chapman and those who are aware of what’s happening in the Sheriff’s department, people like the Commonwealth Attorney, Jim Plowman, http://thebullelephant.com/commonwealth-attorney-jim-plowman-endorses-eric-noble-for-sheriff-in-loudoun-county/

No news here, under Isom and Simpson the approval ratings were always around this number.

Why not. He hitched his wagon to Volpe for his first convention.

To me it would be difficult to support Chapman if he runs as an independent. He has emphatically stated several times that he would abide by his promise to support the Republican candidate for Sheriff as any Republican should do. The purpose of having a nominating convention is to select the best candidate to run in the ensuing general election. For a candidate to not gain the nomination and then turn around and run as an independent damages the chances for the nominated candidate to defeat the opposing party’s candidate in the general election. If Chapman were to do this he would stand virtually no chance of actually winning the general election but it could result in a Democratic victory. Furthermore, can one really have trust in a leader when they sign a pledge to support the party candidate, state several times in public that they will support their fellow Republicans, but then opt to break their oath and damage the chances for the party to which they claimed to be so dedicated? If a candidate were to do this I would have to really question their integrity and honesty. I just cannot see how a leader, especially one in a law enforcement position, can be trusted if they cannot abide by promises they make and swear to abide by. Those who work in the law enforcement field go through rigorous vetting to insure they are honest and trustworthy; it should be no different for the person who leads them.

I agree, it would be very difficult for Chapman to win but it’s happened often in the past. Sheriff Simpson comes to mind.

True Simpson did win but at that time he was very popular with the citizens and the deputies; that is not the case with the current sheriff. Also, the Republican nominee that time was very weak and inexperienced. Noble is a very strong candidate and proven leader who is very qualified assume the position of Sheriff.