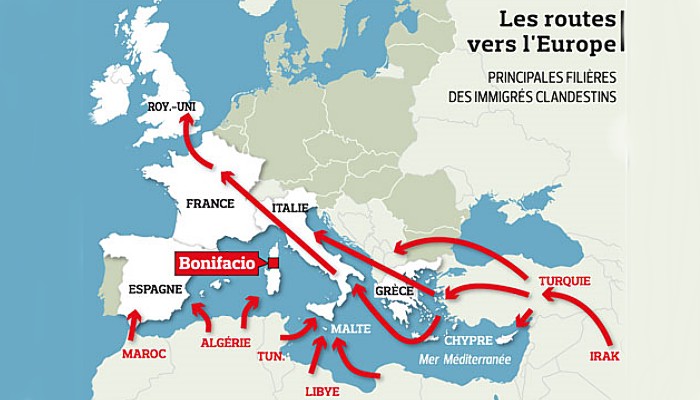 In his address to NATO members this past week, President Trump spoke to the horrific terrorist attack in Manchester, UK, which killed 22 and injured 119, in saying:

“All people who cherish life must unite in finding, exposing, and removing these killers and extremists — and, yes, losers.  They are losers.  Wherever they exist in our societies, we must drive them out and never, ever let them back in.”

However, the Manchester attack is by no means the first radical Islamic terrorist act in Europe nor the worst in terms of body count.

But instead of a concerted unified effort by the European Union or NATO to wipe out terrorism,  each attack seems to be treated in isolation and like another street crime.

According to a recent Fox News report, an estimated 6,000 ISIS adherents could be in England now, and can travel to the Middle East and back freely.  During the heyday of the Irish Republican Army bombings in the UK, there were at most 300 IRA members.

It appears the leaders of the main European powers have no gumption to really take on their own policies that led to these attacks, and nor do their citizenry.

Each attack has the same scenario.  People are killed.  The media frenzy begins.  The public grieves.  They hold candlelight vigils with signs reading “Je Suis Charlie” (as in the Charlie Hebdo massacre), and then their government does some military response.  Suspects are captured. The media attention then dies down, and life goes on.   Politicians will send in war planes to counteract ISIS, as France did after the Paris bombings in 2015, but terrorism on European soil continues unabated.   If a right winger dares ask for deportations, or surveillance, they are tagged as racists.

Candidates who arise that wish to control the borders and take on Islamofascism are defeated.  Geert Wilders, a longtime critic of radical Islam, lost the Netherlands prime minister election this year – -despite two horrific ISIS-led attacks in neighboring Belgium – and Marine Le Pen was swamped by Emmanuel Macron, a handsome charismatic talker who stands for absolutely nothing – an Obama with a French accent, as far as I can see.

When Andrea Merkel faces re-election as German chancellor I would not be at all surprised if she wins, despite letting in more Middle East refugees than other countries and bringing a host of problems with it.

So, why is Europe so toothless in dealing with these attacks and taking the tough action that Trump is trying to implement in our nation?

The following are my theories.

First, Europe never had a significant single-day disastrous attack like 9/11 in the U.S., which led to a U.S-led “War on Terrorism.”   According to Religion of Peace, the lion’s share of the 1,848 Muslim terrorist deaths were by Chechnyan separatists in Russia in 2004 (some 400 killed that one year in two attacks)  following by the 3/11 attack in Spain in 2005 (208 killed).    In other words, the attacks are scattered, although more frequent since the migration crisis began in 2014.  As such, each nation responds on its own.  At the G7 Summit Trump attended in Sicily, there was discussion about sharing intelligence information among nations.  One would have thought this would be the norm since 9/11.

Second, most of these perpetrators are NOT migrants, but Muslims who had citizenship in these countries and became radicalized.  About 13 million Europeans are Muslim, a large number not from the refugee lines, but from ex-European colonies.  They appear to be an important voting bloc    See Pew Research on Muslims in Europe (see chart)

Europe adheres to the democratic concepts of free speech, free press, freedom of assembly and freedom of religion.   How does a democracy PREVENT its citizens from peaceably meeting and plotting to blow themselves up in a crowd without encroaching on their civil liberties?

In addition, the lack of gun rights over there makes it impossible for people to defend themselves or “open carry” so the bad guys know a responsible person with a gun is in their midst.

Third, Europe has an even-more pernicious Left than we do in the U.S., capable of compartmentalizing each attack as “not due to Islam or migrants” and unleashing the PC hounds on anyone who dares question this.   The bulk of Northern European nations have pretty much become “blue” like our Northeast or West Coast.     Europe lacks conservative religious dominations like we do who are influential in American politics. I find churches have little  influence in European politics.    And the current Pope is a liberal.

Fourth, just the way U.S. businesses have opposed restrictions on immigration on our southern border, so too have European commercial interests desired Middle Eastern migrants for their economy.   As such, business is allied with the politically correct Left in supporting open borders as it’s good for the Almighty Euro.   Business doesn’t like politically incorrect politicians, I guess.

Fifth, European nations are still guilt ridden over the cold shoulder they gave immigrants in the past, notably Jews seeking to escape Nazi persecution.  Perhaps this is why Germany has had the most open border policy of any Western European country.  As a Jew, I resent it when liberals try to use the Holocaust card to justify unrestricted migration of Syrian and Iraqi refugees as none of my people, nor the Romani (gypsies) and other Nazi victims, wanted out of Hitler’s Germany in order to commit terrorist acts.

Finally, I believe a major reason Muslims become radicalized to a greater extent in Europe than the U.S. is that they are by and large ghettoized in these countries.  Muslims appear to live in their own “barrios” in France, Belgium and Sweden, and probably other nations as well.  Ghettoization may lead some of these residents to join jihadi causes and walls off European “natives” who may be lulled into believing their neighborhoods are safe from all this.

In the U.S., by contrast, while there are well-defined Muslim barrios in some cities, notably in Michigan, our Muslim population is fairly integrated.  Where I live in Northern Virginia, I know of no “Muslim Neighborhood.”  Muslims are in the American Melting Pot, and while I back Trump’s travel restrictions, I am not anti-Muslim at all.

We should be thankful that the attacks on our country, though tragic, are not as frequent and that we have a President who actually wants to keep us safe by keeping out terrorists.  Some 420 Americans have died in Islamofascist terrorist attacks since 9/11 mostly on the appeaser Barack Obama’s watch.

Unfortunately, Trump’s efforts to impose restrictions on entry from six Middle East nations – which he can lawfully do, even by religion or ethnic group — is being held in abeyance by America’s New Fifth Column —  PC academia, Hollywood, the media and now the activist partisan judiciary.  Just this past week, the once conservative Fourth Circuit Court of Appeals shot down Trump’s travel restrictions.  That ruling was not based on law as much as Trump’s rhetoric, meaning it may mean the U.S. Supreme Court will have to act.   Incredible!  4th circuit shoots down Trump travel restrictions

I personally do not like the idea of someone being detained at an airport because they are wearing a hijab, but preventing more Manchesters and Charlie Hebdo attacks is more important.  I hope the killings stop.  However, it does not seem European voters and their leaders are really willing to put aside commerce and political correctness to join Trump in the fight and will just continue to be reactive by sending warplanes against ISIS  after the fact.

Great perspective on that European mentality. The meaning of “islam” is “submission,” and those peace loving muslim terrorists will not be happy until they have dominated all of us infidels. So sad that the left continues to ignore that clear and present danger, and in some cases, have been willing partners in their efforts. They are here and any who frequent them “gun free” zones better keep their heads on a swivel! Losers only attack the innocent and the defenseless!

Islam is more rightly called a political ideology than a religion.

As much as I would like to believe that ghettoization is the problem, I can’t. We have many black and Hispanic ghettos here in the USA and none of them are driven to terrorism. Unfortunately, the problem is inherent in Islam itself.

How about the fact that many of the jihad terrorists are middle or even upper middle class.

How about accept the fact that terrorism occurs every day in America’s ghettos? Just because you weren’t there doesn’t mean it didn’t occur. That’s the EU excuse to their citizens.

You need to look up the legal definition of terrorism.

Do you think gangs and their enablers don’t have political or social objectives?

Some do and some don’t. However, the are not national or worldwide threats to civilization.

You forget about BLM!

BLM doesn’t have a 1400 year history of violent conquest and a complete replacement of any non-Islamic government in mind. Islam is political, and we ignore that when we call it a “religion of peace”.

True, BLM does not have centuries of violence in their history, but they are nevertheless no less dangerous. Just because they have a short history does not mean that they are not a violent, hate-filled, supremacist group.