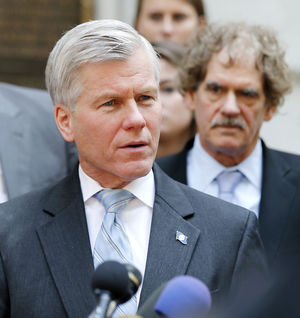 The Justice department went after Bob McDonnell for years in a frivolous case against him. Â Ultimately it will cost the former Governor over $10 million in legal fees.

According to Jeff Shapiro at the Richmond Times-Dispatch there is nothing to prevent McDonnell’s lawyers from going back to court to ask Judge Jim Spencer to award legal fees to McDonnell and his wife.

The Restoration Fund set up to help pay the McDonnells’ legal fees has raised over half a million dollars but had only $35,675 on hand at the end of June. Â Donations to the fund can be made here.Â

Sorry, we just nicked $4 million for our primary, check with KC and the Delegate Defense Fund.

Itâ€™s all crooked. It’s all corrupt.