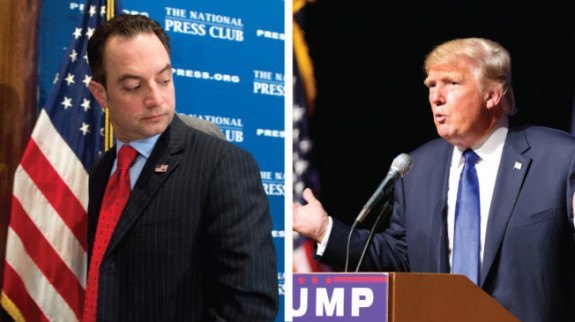 Will the Republican Party Cut their Losses and Abandon Trump?

In October of 1996, when it became apparent that Bob Dole was not going to beat Bill Clinton, the Republican party pulled their money from the Presidential campaign to use it for Congressional battles in an effort to save the Senate and the House.  Will that happen again this year?

According to Time magazine, Reince Priebus calls Trump daily to tell him to fix the latest gaff, clarify the latest mess, but Preibus is reaching his limit as Trump continues to make gaffs and is losing ground in every recent poll.  From the magazine,

The chairman had a frank message for the nominee, according to two Republican officials briefed on the call. Priebus told Trump that internal GOP polling suggested he was on track to lose the election. And if Trump didn’t turn around his campaign over the coming weeks, the Republican National Committee would consider redirecting party resources and machinery to House and Senate races.

Trump denies the exchange ever took place. “Reince Priebus is a terrific guy,” Trump told TIME. “He never said that.” Priebus could not be reached for comment. But whatever the exact words spoken on the phone, there is no doubt that the possibility Republicans will all but abandon Trump now haunts his struggling campaign.

Now a large group of Republicans have sent a letter to Priebus urging him to stop spending money on Trump. From the Washington Post,

Frustrated Republicans have drafted a letter to Republican National Committee Chairman Reince Priebus urging him to stop helping Donald Trump win the White House. They want the party to focus its resources instead on protecting vulnerable Senate and House candidates.

A draft of the letter, obtained by The Associated Press, warns that Trump’s “divisiveness, recklessness, incompetence and record-breaking unpopularity risk turning this election into a Democratic landslide.”

They want Priebus to immediately shift “all available RNC resources to vulnerable congressional candidates to “prevent the GOP from drowning with a Trump-emblazoned anchor around its neck.”

Another problem Trump has is money. He needs help from the National committee to raise funds.  At the end of June Trump had $1.3 million on hand while Hillary had $42.5 million on hand.  Both camps claimed to have raised about $80 million in July. Republican national committee has $21 million in the bank while the democrats have $9 million.  Trump needs those funds and more.

Republican Senators can’t afford to have Trump dragging them down but that appears to be what’s happening. Normally the Presidential candidate would help support the Senate candidates but this year that’s not the case.  This year everything has changed and some Senate candidates like Republican Senator Rob Portman are hoping voters will split the ticket.  Splitting the ticket, voting for a Presidential candidate of one party and a Senator or Congressman of another party has become much less popular in recent years.  Portman is hoping to bring back ticket splitting.  As of now Portman is ahead of his democrat opponent, Ted Strickland, by 6.4%.

“If we fail to protect our majority in Congress, we could be handing President Hillary Clinton a blank check.”

Those two words, “blank check” were exactly the words used in 1996 when Republicans urged the leadership to cut Dole loose to focus on retaining the majority in the House and Senate.  From the NY Times in October of 1996,

Republican campaign operatives are urging their party’s Congressional candidates to cut loose from Bob Dole and press voters to maintain a Republican majority and deny a re-elected President Clinton a ”blank check.”

Time is running out for Trump.  He needs to turn things around fast, before Labor Day.