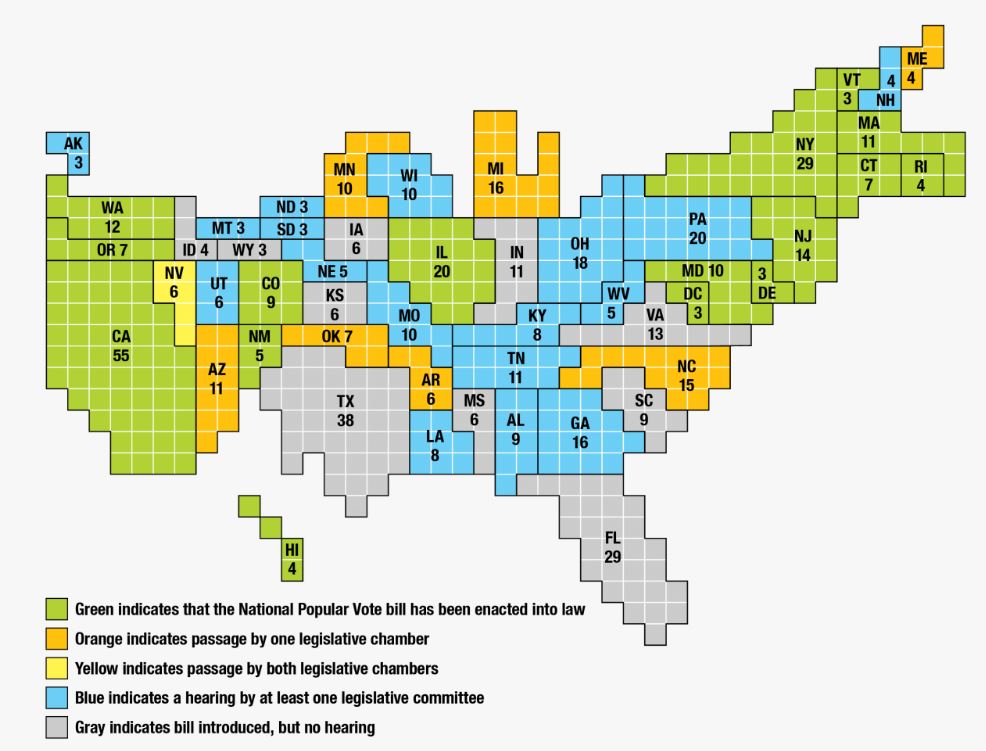 Add this to the pile of really bad ideas that now have a chance to pass in New Blue Virginia: Allowing California and New York to decide how to cast Virginiaâ€™s electoral votes.

Since millions who slept through government class were stunned to learn in 2016 that the popular vote doesnâ€™t pick a president, efforts have been growing to bypass the Electoral College process. According to the folks at National Popular Vote, sixteen states with 196 electoral votes have voted to dis-enfranchise their people, and in several others at least one legislative chamber has agreed.

The Virginia General Assembly simply ignored House Bill 2422 during the 2019 Session. Its three sponsors, Northern Virginia Democrats Mark Levine, Kay Kory and Marcus Simon, will surely be back with a longer list of sponsors for 2020, and a House Privileges and Elections Committee with a Democratic majority.

This is an end run around the United States Constitution, which has included the Electoral College process since its 1787 drafting. It was the feared electoral punch of then-massive Virginia (compared to the other states at the time) that led the founders to this compromise. What irony if the Virginia General Assembly was the deciding vote to send the idea to the dustbin of history.

It is also an end run around the usual process to amend the Constitution. Why take that trouble? What if states simply agreed on their own to award their Electoral College votes to the winner of the national popular vote?

According to that failed Virginia bill, the interstate compact doesnâ€™t even require a majority of states to agree to take effect. It only requires agreement in states with more than a majority of electoral votes to trigger the plan. That is way simpler than getting two-thirds of the state legislatures to approve (ask the ERA folks.) States with 74 more electoral votes are required, and the states where it has passed one chamber already would be sufficient.

The assumption of course is that Virginia voters wonâ€™t mind or really notice, since it has given its electoral votes to the same party three elections in a row now, with conventional wisdom predicting the same for 2020. But how will those same voters feel if the situation reverses, a Republican wins the popular vote but is on the knifeâ€™s edge in the Electoral College? Suddenly Federalism will enjoy a rebirth, even here in New Blue Virginia.

There apparently are a fair number of Democrats who understand the downside of this idea, and not just those in the smaller states that would suddenly become sideshows in a national campaign. (Vermont approved this. Are they crazy?) And oddly there are some Republicans attracted to this idea.

The organized opposition comes from a group called Save our States, with their argument summarized in this article in The Hill a few months back. Author Sean Parnell paints a grim picture:

It would be the Florida 2000 recount all over again any time the election was thought to be close, except on a vastly larger scale with lawsuits in most, if not all, of the nearly 4,500 counties and townships that administer elections.

He reports at least one state, Colorado, is rethinking its position and plans to ask its voters about the idea in a 2020 referendum. He is right that a side effect of the compact would be pressure on states to go to a uniform voting process, rather than the variety of rules we see now.

More popular with Virginia Republicans is another approach, to award Virginiaâ€™s electoral votes by congressional district. The 2019 House Joint Resolution 627 and Senate Bill 1002 would give two electoral votes to the candidate who won statewide, but then divide the rest based on the congressional district outcomes. Was that an admission the Republican sponsors see no chance of a future GOP win for a presidential candidate who will need all 13 Virginia electors? Save Our States takes no position on how states allocate their electoral votes internally.

Both are bad ideas. It really was the Miracle of Philadelphia, with the Electoral College one of the provisions intentionally creating a federal republic andÂ notÂ a democracy. James Madison and other founders, fearing unchecked democracy, understood that. But in a country where we dare not even name a school for Madison, how long can respect for his wisdom abide?

Steve Haner, who is wrapping up his lobbying career, is the former executive director of the Joint Republican Caucus of the Virginia General Assembly and was director of administration for Attorney General Mark Earley. He is contributing editor at Baconâ€™s Rebellion and Senior Fellow for State and Local Tax Policy at the Thomas Jefferson Institute.