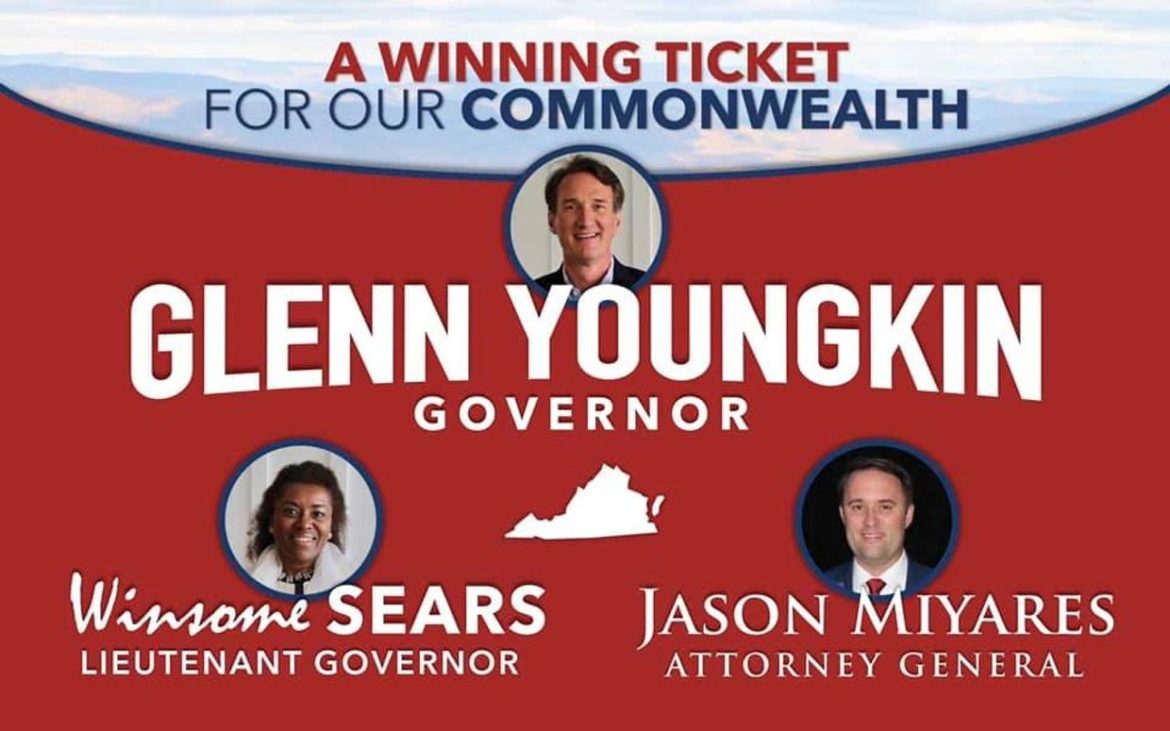 In a Republican Governors Association (RGA) poll taken earlier this month, Republicans are on the verge of winning state-wide seats next month. With 20 days until election day, the Republicans have the momentum. (Even Nate Silver’s 538 blog shows that.)

The RGA poll shows Democrat McAuliffe ahead of Glenn Youngkin by a mere 3%. This same pollster showed McAuliffe leading by 11 points in May. Trend lines are showing that Republicans are also poised to win the races for Lt. Governor and Attorney General.

>>>In the polling group’s early October poll of the Youngkin-McAuliffe race, the Republican nominee was hitting margins in key battlegrounds that, if they hold, will make it very difficult for his Democratic opponent to win statewide. Those margins included Youngkin at 43% in the Northern Virginia region that encompasses metro Washington and 53% in the Richmond suburbs of Chesterfield and Henrico counties.

Additionally, Biden is underwater with independents statewide, with 61% of this key bloc holding an unfavorable view of the president. Suburban swing voters, who entered the summer feeling the beginnings of “buyer’s remorse” in regard to their vote for Biden, reached full-scale disappointment amid the president’s much-criticized leadership of the military withdrawal from Afghanistan, Republican operatives who have studied the GOP polling data say.<<<

Voters in suburban counties may also be unhappy with the massive influx of illegal immigrants under Biden, some of whom are making their way into Virginia. With the Biden administration ban on worksite arrests of illegals, even more will come.

That was then, this is now. And Ed came very close to winning.

Don’t you ever feel a tad out of place here?

I see honesty & class within Glenn Youngkin the man.
My previous experience with McAuliffe gave me neither of those perceptions, just the feeling that he was here in Virginia for himself.
I know this to be above Youngkin but it would be nice to see an add with McAuliffe, Herring and other Democrats on a School Bus.
As the School Bus in pulling into the School McAuliffe say; floor it then the out of control School Bus heads directly for the Soccer Fields, kids running & screaming, the School Bus comes to an abrupt violent stop Terry McAuliffe yells get them, then out jumps about twenty law enforcement officers in tactical gear and starts slamming moms to the ground, Terry yelling; where is the President of your PTA.
Democrat Representation coming to a School near you.

Eric. Are you going to move back to Philly when Terry McClinton Rat loses? You will LOVE it there!! Why live in Virginia when you can enjoy a real Democrat hell hole like you like? If Trump wins again you can keep going straight across the border to Canada in three years. Keep moving north buddy!

I really, really hope so. If, as I suspect, McAwfull and his fellow traitors steal the election like they did last November then I will be forced to move out of state. I can’t stay and pay taxes to traitors.

Let’s hope it is a Red Sweep.