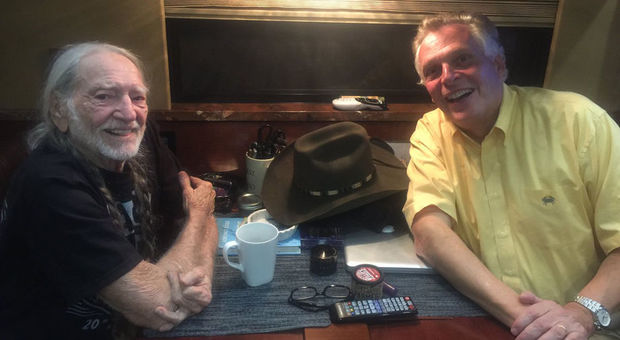 Willie and Weed and the Governor

Willie Nelson was in Virginia over the weekend for his concert to raise money for family famers Farm Aid 2016.

Willie  welcomed Governor McAuliffe to his bus where they posed for pictures. One minor problem, the Governor posed with a can of ‘Willie’s Reserve’, Willie’s brand of marijuana, which can be legally sold in Colorado and Washington. However, it is definitely not legal in Virginia.

According to the Governor’s spokesman, Brian Coy, the Governor opposes legalization of marijuana and he had no idea what was on the table.

“He was not and still is not aware of whatever was on the table or anywhere around him and wouldn’t know marijuana or related paraphernalia if it walked up and shook his hand,” Coy said. “He’s cool, but he’s not that cool.”

“The Governor has never taken a drug in his life”.

In 2015 Virginia arrested 20,881 people for possession of marijuana, almost 60% of all drug arrests.

Willie and Weed and the Governor was last modified: September 19th, 2016 by Jeanine Martin

Willie was the first wild and crazy Rino