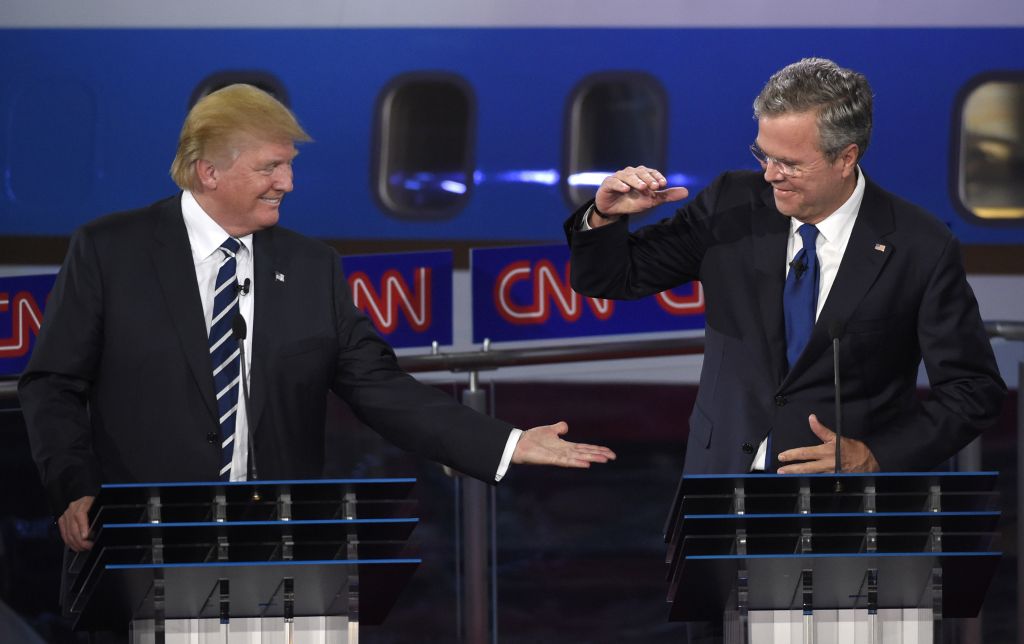 Last night’s seemingly endless GOP Presidential Debate at the Reagan Library gave the candidates a chance to show their stuff on substance and showcase their respective abilities to think on their feet, when it wasn’t a ratings-driven fireworks show.Â  Although snap polls show Trumpians continue to be enthusiastic about their man, Carly Fiorina is the only candidate who genuinely outperformed the field.Â  Marco Rubio showed a masterful command of oratory, and a very impressive grasp on both domestic and foreign policy, all while offending no one and avoiding any of the nasty ad hominem that bogged down some of the other candidates.

Carly Fiorina: She won, and easily.Â  Her moving remarks on defunding Planned Parenthood, and her overall grasp of themes that are clearly resonating among the electorate right now (putting the ordinary voter first, above what she calls “the political class”; regarding herself and other women as more than just some victimhood identity or special interest group; etc.) made Carly shine in front of the cameras last night.Â  She was on fire when it came to foreign policy, demonstrating a mastery of the issues approached by few others on the stage.Â  Combined with a sharp, economical delivery and a wit that easily put the domineering Trump in his place, Carly impressed a lot of people last night and will almost certainly see a big bump in the polls.Â  I think she’ll eat into support currently enjoyed by Trump, Walker, Bush, and especially Carson, and will likely be the second place candidate nationally within a couple of weeks.Â  Look for her to take the lead in New Hampshire.

Marco Rubio:Â  Wow.Â  This guys knows his stuff, and has really improved his delivery.Â  Smooth, confident, and thoughtful, his answers on a range of issues were fantastic.Â  Although his history on immigration amnesty leaves many suspicious of him as a presidential candidate, he handled the issue well, and his personal story gives him standingÂ  on the issue that no other can match (though both Cruz and Bush come with some personal credibility of their own).Â  Where he did best was on his mastery of a muscular but restrained vision of American power abroad, very much in keeping with the American tradition epitomized by the Reagan administration.Â  Rubio hasn’t broken out from the pack in terms of polling, but I think he might see an uptick after last night.Â  In any case, Rubio is well-liked, and in a field as big as this one, there is something to be said for being everyone’s second choice.Â  In that sense, Rubio’s candidacy has some real legs.

Jeb Bush:Â  His joust with Trump over the legacy of his older brother, former President George W. Bush, was a solid winner for Jeb, who showed a lot more personality and “energy” than he’s shown previously.Â  He did what he needed to do to maintain his relevance, and his attractiveness to a fickle establishment donor base that always likes to pick the candidate they regard as the safest bet to win.Â  Although he lacks the verbal acutiy to handle the immigration issue as well as Rubio (perhaps because he is more wed to unpopular positions), overall this was a good night for Bush, who is playing a longer game than most others on the stage.

Donald Trump: Now with more electrolytes!Â  Seriously, no matter what this guy says or does there are folks, some of them good friends of mine, who will admire him for it.Â  Judging by post-debate snap polls, most people thought he won.Â  So, I put him in the winners column (but also in the losers column…see below).

Rand Paul:Â  Paul was the only candidate to put forward a serious, pro-growth, pro-freedom tax policy with his proposal for a universal flat tax 14.5% (personal and business).Â  He was also the only candidate who seriously addressed criminal justice reform, including the travesty of a drug war that has as a defining characteristic that it puts hundreds of thousands of poor people in prison for non-violent crimes.Â  Like it or not, folks, Paul’s stands here dominate among our younger demographics, and it’s a good thing for the GOP to have him on the stage and part of this mix.

Rand Paul:Â  For as good as Paul was on some of the domestic issues, he was in equal measures bad on foreign policy.Â  I do not mean to suggest that philosophically he didn’t make valid points, and that he loses objectively on policy (though his views aren’t in line with my own).Â  My point here is that whether or not you agree with them, his views simply do not appeal to your average Republican primary voter.Â  I give him credit, though, for having the courage to set aside the carefully-crafted, consultant-driven message that had been eating into his previous credibility.Â  Looks like Rand has decided to be Rand again.

Donald Trump:Â  Carly put him on his heels more than once.Â  He doesn’t handle strong women well.Â  But Jeb Bush’s jibes left a mark as well.Â  I’m not going to make the mistake (again) of thinking Trump’s balloon has popped.Â  It hasn’t.Â  But I think those people who are upset at politics as usual saw last night that they have options.Â  That’s not a good thing for Trump in the medium- and long-term.

Scott Walker.Â  I love this guy, and he’s been in my top three for a long time.Â  Walker has a record.Â  He has a vision.Â  He’s got resources and organization (particularly in Virginia), and he’s got an ability to communicate.Â  What he’s not showing, though, is an ability to break out of the crowd.

CNN:Â  Although I’m sure they made a fortune on advertising, they did not run this debate very well.Â  First, a three full hours, it was way too long.Â  Second, especially in the first half of the debate, the moderators seemed obsessed with provoking catfights among the candidates.Â  It was unseemly, and a distraction from the issues about which people genuinely care.Â  Fireworks might be good for ratings, but they do a disservice to serious discourse, so CNN failed in this regard.Â  It seems the only reason we heard any substance last night was because they couldn’t fill such a vast quantity of time with nasty back-and-forth bickering.

Christie/Huckabee:Â  Time to pack it in, fellas.Â  Both gave seriously great performances that simply aren’t going to get them anywhere.Â  Their personas, and their positions and backgrounds, just aren’t suited to this environment.

John Kasich:Â  Clearly he’s trying to be a more acceptable establishment alternative to Bush.Â  Stop.Â  Please.Â  Go back to where you were in the 1990s, as the smart, articulate, sharp-witted and principled conservative.

Ben Carson:Â  I have to count this as a net loss for Carson.Â  Apart from revealing himself to be incredibly naive on foreign policy (saying we shouldn’t have attacked in Afghanistan after 9/11), he really didn’t do anything to solidify or extend his support.Â  I think Carly is going to eat him alive in the polls.

Ted Cruz:Â  Cruz is going to be a wild card.Â  He’s well-funded, is going to have great days in southern states on March 1 and March 15, and is going to be in it for the long haul.Â  He says all the right things for the movement conservative.Â  There are three reasons he’s not dominating: (1) Trump; (2) the field is very crowded; and (3) there are lingering impressions that he might not be electable at a national level.Â  I think he improved those odds last night, but we’ll see soon enough whether it’s enough to get past numbers (1) and (2).

I think that Trump’s support will start to slip, because he offered few specifics about his policies. While he continued to wave his arms and make broad brushed statements, people like Marco Rubio showed in-depth command of the issues and offered specific policies.

Carly is very well prepared and put on a good show, but, it’s too much an act. In fact, none of the candidates looked to comfortable up there except Trump; He is not pretentious and is quite comfortable in his own skin. It would be nice to see other candidates with the same level of confidence.

“Go back to where you were in the 1990s, as the smart, articulate, sharp-witted and principled conservative.”

Really? You might recall Kasich was the enabler for Bill Clinton on the so-called “assault weapons” ban.

Kasich is a talking stool specimen who constantly conflates his personal religious beliefs with public policy, such as “God wants us to expand Medicaid.” Despicable. I’d call him a RINO but that would be insulting to RINOs. Rather, he’s what I like to term a Mike Honcho Republican: https://m.youtube.com/watch?v=cwFqZPg9d8k

In my defense, I was deployed outside CONUS for most of the 90s…I wasn’t aware of that about Kasich. I was speaking more about the fiscal stuff. On Medicaid expansion, you’re preaching to the choir, though I’m not sure I’d put it in *quite* the same way.

The “assault weapons” ban vote and the medicaid expansion in Ohio certainly puts him at the very bottom of my list.

I loved how he claimed to have balanced the budget; really? I thought Speaker Gingrich had led that effort!

Having knocked on many doors, I know white suburban women are the quintessential swing voters. Carly must be on the ticket to thrash The Hildebeast.

Fiorina owes a great deal to the obvious favoritism of the moderators. Clearly, they had to set up the Trump confrontation, but at times, it seemed like she, Trump, and Bush were the only candidates onstage.

I am not amused.

Carly Fiorina lost big points with me last night when she said she would NOT tear up this disastrous Iran Nuke Deal on Day 1 if she was elected President. She claimed with a straight face we would be able to keep tabs on them and take action if they violate the terms of agreement!! Hello?? The horrible deal ALLOWS the Iranians to inspect THEMSELVES; and if we want to inspect them – we can’t do it without long-advance notice!

This is the gal who stood with Boehner, McConnell and the Establishment AGAINST Ted Cruz and the Cromnibus gov shutdown. NOW that she’s a candidate she’s all for a gov shutdown to defund PP.

Carly Fiorina is against Common Core NOW, but back in 2010 she was FOR No Child Left Behind and other heavy-handed fed gov intrusions into states’ education.

Before her candidacy, Fiorina supported the DREAM Act and back in 2013 she supported the Gang of 8 amnesty. Now she’s silent on these matters.

Don’t take my word, read for yourself what Conservative Review says about her and where she stands on the issues – https://www.conservativereview.com/2016-presidential-candidates/candidates/carly-fiorina#article-11

Didn’t Carly say she would force Iran to allow us to inspect Iran’s Nuclear facilities anytime we choose. She has made it clear that she will have Israel’s back, always.

Bush isn’t selling, and the RINO crowd is going to go to Christie for a while but more will go to Rubio.

You like the Gang of 8 deal he was going to foist on America?