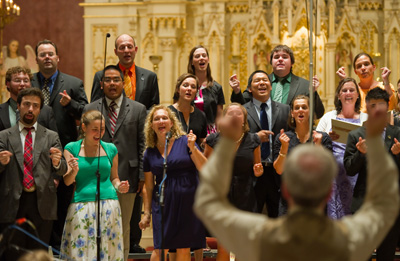 When I was a boy, music was still taught seriously in public schools â€“ i.e., more than singing â€œItâ€™s a Small World After All,â€ off-key, 5,000 times, as my children did during the 1970s. I and my peers actually learned the elements of musical notation, including: the key signature; the time-values of notes; the positions in the musical staff (A, B, C, etc.); and the meanings of rests and dynamics-notations (e.g., piano, forte, fortissimo, mezzo-piano, etc.)

We were expected to put this knowledge to use when we sang in class. My fifth-grade teacher, Mrs. Brown, would prowl the aisles of our classroom, brandishing her ruler like a swagger-stick, as we sang from our song-books. When she found someone goofing-off or wandering from the songâ€™s rhythm, her ruler would crash down on the slackerâ€™s desk â€“ fearsomely beating the time, as the trembling student struggled to regain his place and keep the time properly. (A method drawn from the A. Hitler Conservatory Method.)

Despite this Prussian approach to teaching music (or because of it), I and my peers reached junior high school with some competence in music-reading and singing. Not all of us became singers or instrumentalists, but we could read written music and have a good chance of being able to sing a song â€“ particularly if some instrumental accompaniment helped us along.

Our Junior High music teacher was a commanding lady who stood about 4â€™8â€ tall. (Even at age 12 we towered over her.) Miss Ruhâ€™s career stretched back to around 1915. Because many studentsâ€™ parents had been her students, she could command athletes and other unlikely males to join her school choirs. If her direct invitation didnâ€™t succeed, she would call the studentâ€™s family to exert pressure indirectly. She knew that most students possessed the musical skills they needed to participate in group-singing.

Miss Ruh loved all kinds of music. Her rollicking piano-accompaniment to World War I songs, like â€œItâ€™s a Long Way to Tipperary,â€ spurred us to lusty singing. She thought the school Alma Mater important enough to teach it in class. (Try to imagine that today.) And she took time to explain the school motto â€“ Personal Responsibility. Iâ€™m writing from another century here. If that school has a motto today, it probably changed long ago to Personal Rights. But I digress.

I relate all this by way of contrast to today. The musical instruction I received is now all but unknown in public schools. While singing isnâ€™t entirely gone, little effort is made to teach students to read music. Some schools have eliminated music teachers, for economic reasons, leaving musical instruction to teachers who may or may not be musically trained. Student choirs are a vanishing species. With few exceptions, high school choirs attract mostly girls, but few boys. Certainly, no self-respecting jock would be seen anywhere near a choir. Even in my own college days, a half-century back, I was the only choir member who played football and certainly the only football player who sang in the choir.

An important cultural shift has taken place here. Increasingly, singing is regarded as something you listen to, not something you do. If youâ€™ve been to a professional sports event lately, youâ€™ll know what I mean. If the National Anthem is sung, youâ€™ll be doing a solo in your area of the stands. Around you, people will be mumbling or not singing at all. Behind the leader of the anthem a kind of muted, amorphous drone rises from the crowd. Itâ€™s pathetic, really. (Wags have suggested that â€œTake Me Out to the Ball Gameâ€ should become the new national anthem because more people can sing it.)

I also grew up in a church with a strong musical tradition. I tell my grandchildren how we sang the Songs of Zion with joy and conviction. Advantageous genes (Welsh, Jewish, Irish) helped me become a singer, but that was merely the luck of the genetic-draw. Even without that natural gift, I still had the benefit of my public school instruction and the reinforcement of robust church singing during my formative years. My peers shared these advantages all through their lives.

But the listening-not-singing paradigm has even invaded the church, the country’s last bastion of real singing. Contrasted with my own youth, when we eagerly read and sang hymns and gospel songs from an early age, many of todayâ€™s churches are a musical wasteland. Because younger people are often musically illiterate, church leaders tend to assume that no one can read music any more. So music-copy has gone the way of the dodo bird.

Much of the â€œcongregational singingâ€ in church-services now consists of â€œpraise and worship songs.â€ These are led by a worship leader, backed up by a â€œworship teamâ€ staffed with guitar-strummers and some nice-looking young ladies. Theyâ€™re fun to watch, but I am left wondering what we are really trying to do. A young neighbor agreed. She said, â€œI like church to feel like church, not a night-club.â€ 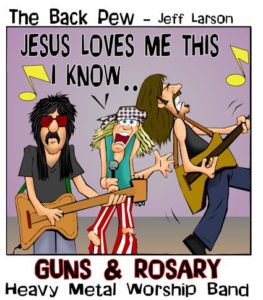 In fact, the worship-team presentation is not congregational singing at all. Itâ€™s a performance. The team does the real singing, since they see music-copy. Amplification creates an â€œacoustic illusionâ€ of widespread participation. Words are projected on a big screen or printed in the bulletin, but the congregation sees no music-copy.

The great hymns of the Christian Faith are fading away. Hymns like â€œWhen I Survey the Wondrous Crossâ€ â€“ sometimes called the greatest hymn in the English Language â€“ are all but unknown to young worshippers. Abbreviated ditties written in contemporary style â€“ often with difficult meter and syncopated time â€“ are the new norm. Trained singers can have difficulty sight-reading them from printed music. But for ordinary worshippers, struggling with unfamiliar, non-melodic tunes while looking at words only, itâ€™s hopeless. That same neighbor observed that church songs are no longer â€œsinger-friendly.â€

A family we know well here in Virginia decided to leave their church after leaders adopted an exclusively contemporary style of worship. This included a crash-bang-alakazam rock band, a jiving praise team, and removal of all hymnals and copies of the Bible from the pews. Printed music was not furnished for the â€œpraise songsâ€ â€“ a worship-segment in which the congregation was not really expected to participate to any significant degree. Numerous congregations of our acquaintance are struggling similarly over music styles and congregational participation.

With respect to the no-printed-music issue, church leaders typically cite modern worshippersâ€™ music-illiteracy. But they offer no data showing whether the illiteracy story is true or how widespread it is. The axioms of the new worship-paradigm are â€“

I beg indulgence from my non-churchgoing readers for dwelling on a topic they may think has little to do with them. But may I suggest that it actually affects all modernÂ Americans. In an earlier column I argued that the disappearance of a lighthearted, humorous perspective was a danger-sign for our culture. Similarly, I argue here that the loss of singing signals a non-trivial degeneration of our society. The erosion of music teaching has contributed to this problem. As people obtain fewer musical skills, they will sing less. This has diminished public singing in our culture. It is not a wholesome result.

Poets say music comes out of the heart, signaling joy inside the person. When joy is absent, there is no song. If that condition is widespread enough, singing becomes de-emphasized. Try to think of when you were last in a public gathering where the crowd sang together as though they really meant it.

At the open-air Baccalaureate Service for my public high school graduation in 1960, our entire class of 700 rose and un-self-consciously sang, â€œGod be with you till we meet againâ€ in a stirring benediction chorus. Classmates wept openly and embraced as the words â€œTill we meet at Jesusâ€™ feetâ€ rang out in the June evening. I shall never forget the sound. Emotion still sweeps over me whenever I recall it.

As a boy I watched and listened as my father sang at his workbench. He wasnâ€™t a trained singer, but he had a fine, natural Welsh voice. His workday was long. His house was full of noisy kids. He drove an old car and had very little money in his pocket. Our possessions were meager, compared to the bounty that young people have today. Yet music flowed out of him because he was pleased with his life and his heart was filled with joy and love.

In the Lordâ€™s Providence, Pop taught me the joy of singing and an optimism about life. In turn, my children learned these things from me and their mother. Today I hear them singing in their homes and cars, during the ordinary events of their lives. Their children are doing the same. Singing is being passed on in a joyful heritage from generation to generation.

But outside is a culture that has forgotten this marvelous gift. We hear professional singers â€“ even in our churches â€“ but many people donâ€™t think it is something they can do. This situation simply must be changed. Singing has been a key part of the American character, and we must not lose it.

The road back is a long one â€“ the more so because only a few fuddy-duddies like me even see a problem. Gradually, however, people are beginning to realize that singing was something that once made our culture unique and grand. They want it again.

In north Georgia, our son and his family searched until they found an Evangelical church that still sang the old hymns. â€œWe wanted our children to know those songs,â€ they said. Their church is filled with young families of like mind.

To restore music in our culture, we need to bring the musical building blocks back to our schools and churches to help these institutions â€œrediscoverâ€ singing. If they donâ€™t, people will go elsewhere. More than any time in the past, Americans can â€œvote with their feetâ€ to leave situations they canâ€™t correct. This now includes both schools and churches.

I believe that eventually we shall find our way back to singing. Work and sing and pray for that time â€“ even if you donâ€™t usually sing or pray.

Without a Song was last modified: December 31st, 2017 by Woody Zimmerman

I love everything about my church except for the ‘new’ Christian music and the rock bands that sing them. Not very worshipful if you ask me. I miss the old gospel songs sung by a choir and congregation sings too. That moves me. The new music, not so much.

Democrats told me that if you like European music you’re a racist.

I should think so…

Ha! Exactly so. Just like those old dudes said to Mozart: “Too many notes…”