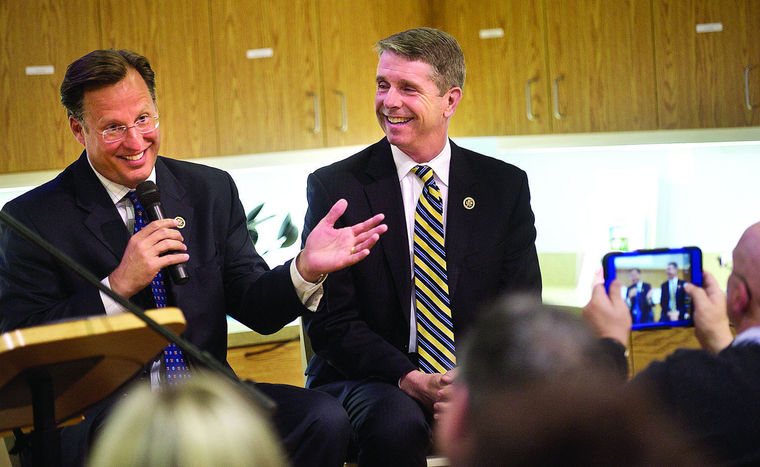 Only Congressmen Rob Wittman (Va 1), Dave Brat (Va 7) and Morgan Griffith (Va 9) voted against the Legislative Branch Appropriations Act. The rest of our so-called Republicans from the Virginia Delegation voted to pass this Continuing Resolution funding 100% of the Democrat Agenda, as well as funding the Federal Government through December. Speaker Ryan and Majority Leader McConnellÂ could have proposedÂ a Continuing Resolution that would have allowed the new Congress in 2017 to fix our budgetary woes. However, instead, they forced the CR intoÂ the Lame Duck session, which means that every outgoing House and Senate member will have the ability to pack December’s Omnibus Bill with as many pet projects as possible without ever being held accountable.

I want to personally thank Congressmen Rob Wittman, Dave Brat and Morgan Griffith for their opposition to this legislation and would like to encourage them to vote against the Omnibus (give away the store) bill in December. At least the residents in the 1st, 7th and 9th districts know that they were not apart of this country’s dangerous addiction to irresponsible spending.

We may need new Republican representation in every other district in the Commonwealth.

Congressmen Rigell (2nd), Forbes (4th), Hurt (5th), Goodlatte (6th) and Comstock (10th) all voted for the Continuing Resolution. They will lie to their constituents, telling them that they voted for this bill because they didn’t want to shut the government down. We know better. The Omnibus Bill the Lame Duck Congress will vote on in December is already written. They could have passed that bill before the November election, but they do not want to be held accountable for an even larger monstrosity. They know that by 2018, you will have forgotten what they did in December of 2016.

No family or business could conduct themselves the way our federal government conducts its business, without ending up before a judge and jury. The American people need to be the judge and jury. I’m certain that many of these Republicans are just going along to get along. I’m certain that they are all nice people with good intentions the size of elephants. Sadly, we need better than that in Washington D.C. We need responsible arbiters of America’s finances.

These Congressmen and women will tell us that with President Obama in the White House it’s an uphill battle, but that they are fighting hard. I say, fight harder.

Virginia Republicans need to demand twelve appropriations bills and twelve separate votes. These CR’s and omnibus bills exist to hide from the American People what their government is doing with their money and their future. There is no reason why Congress cannot do it’s job, but if they will not do their job, we ought to consider sending representatives to Congress who will.

Post Script: I would like to thank Heritage Action for their relentless efforts in stopping this fiscal debacle.

This says it all :

When I was in the Army, we had a term for folks like Rep Hurt… “Oxygen Thief”. He may as well just resign since he’s basically ROAD – “Retired On Active Duty” since he announced he’s not running for reelection. What a piece of work…

Rigell is the same way. It’s easy to sell out when you aren’t running anymore. Not that it would matter. Hurt and Rigell would have voted for this regardless. They’ve been voting for these for years.

I’ll tell you what Republicans can do: You can GOVERN.

President Obama is the first president to be denied a hearing on his
budget.

He’s the first president to be denied hearing a Supreme Court
nominee.

President Obama is the first president asked to show his birth
certificate.

President Obama is the first president to face over 500
filibusters here in the Senate.

In the Republican Senate, President Obama will receive fewer nominees
confirmed than any president in decades.

Republicans have not
done their basic work of government.

Yet, you find plenty of time to rally behind a con man and a fraud.

“govern” â‰  “do the bidding of the Democrats”. Nice try.

You hit it on the head!

Yeah, you should really vet your candidates better so we Republicans don’t have to keep doing the heavy lifting. He never did show his Birth Certificate right? (Not the forged COLB, but the real one. Which hospital was he born at again?)

Governing equals installing 100% of the Democrat Agenda as opposed to just 60%?

So, you want me to go to local Republican HQ, when it is the Republicans who are suing to keep wages down? Get frekin’ real.

Yeah, which kind of Republicans do you think are infesting the GOP headquarters? Your nevers and establishments are at the Candidates of choice HQ’s. Go down and confirm for yourself.

And the cost of living down. The GOP needs to reject 100% of Trump’s protectionist plans.

Which HQ are you at?

I’ll wager Tom Garrett (VA 5)will join the trio next year in opposition of the reckless continuing resolution too.

Hope so, but so many have failed and disappointed us.

I know him, he is fine, and a few others are okay, it is all the rest. Invariable they turn, I don’t think most want to turn, but they can’t help it, others are happy to fill their greed. Hurt admitted to me one day that he simply wasn’t ready or aware of the insanity of DC. He said I wouldn’t believe how “crazy” it was. Yeah, I am aware of the craziness. It was nothing like he had anticipated, hence, getting out and going home making an honest living. I liked Hurt, he did some good votes, a few I questioned, but he was definitely better than some up there in the Swamp. I enjoy reading his brother’s stuff too. I want Garrett to win, but people need to show up and watch for the fraud at their polls.