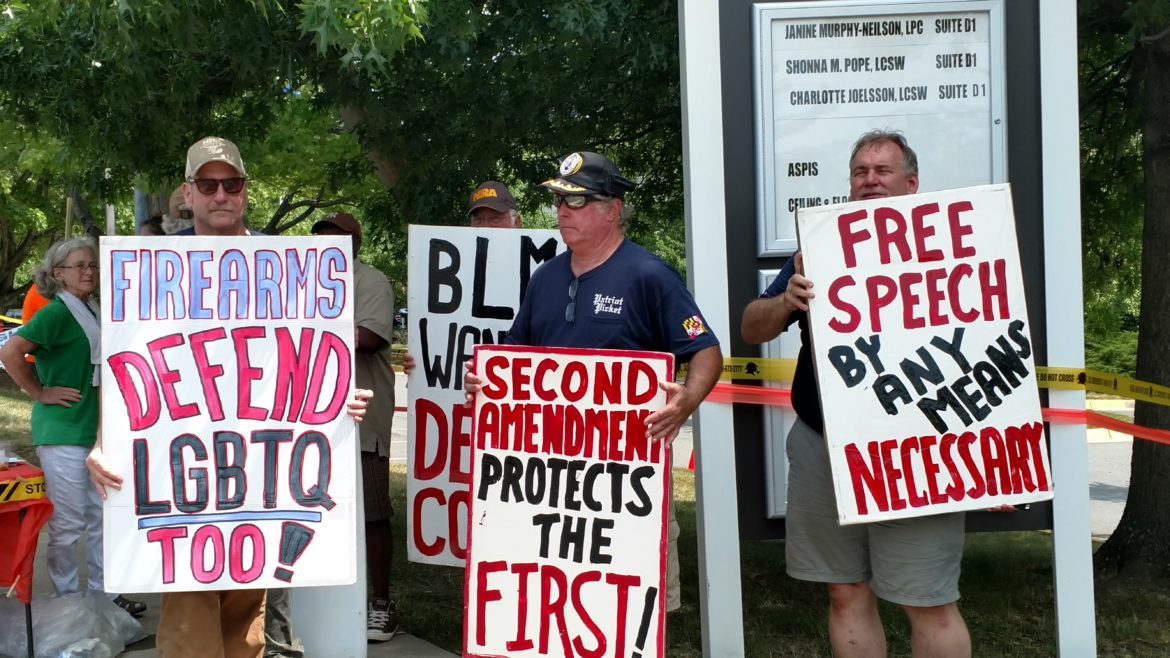 This morning, Friday July 14, 2017 left wing protestors descended on the NRA headquarters in Fairfax Virginia to protest, well, something.  The protest appears to have been developed in response to a recruitment video from the NRA published about a month ago decrying left wing protestors generally, seen here:

According to a left wing website 1000 people RSVP’d on Facebook.  Presumably many more would appear that hadn’t RSVP’d.

I first noticed the distinctive pink hat about a quarter mile away.  I had to drive past the rally just before it began on my way to my secondary office (the Fairfax Courthouse).  By the time I made it back at about 11:40 the 17 mile March that was supposed to begin at noon had already begun.

Most of the protestors had already left the scene, but I took some time to speak with the counter protestors from a Maryland based group named the Patriot Picket which also has members in Pennsylvania and Virginia.

Jeff, a spokesman for the Patriot Picket told me they go to left wing rallies and protests and come out in support of First and Second Amendment rights.  Those rights in their minds (and mine) are inherently tied together. 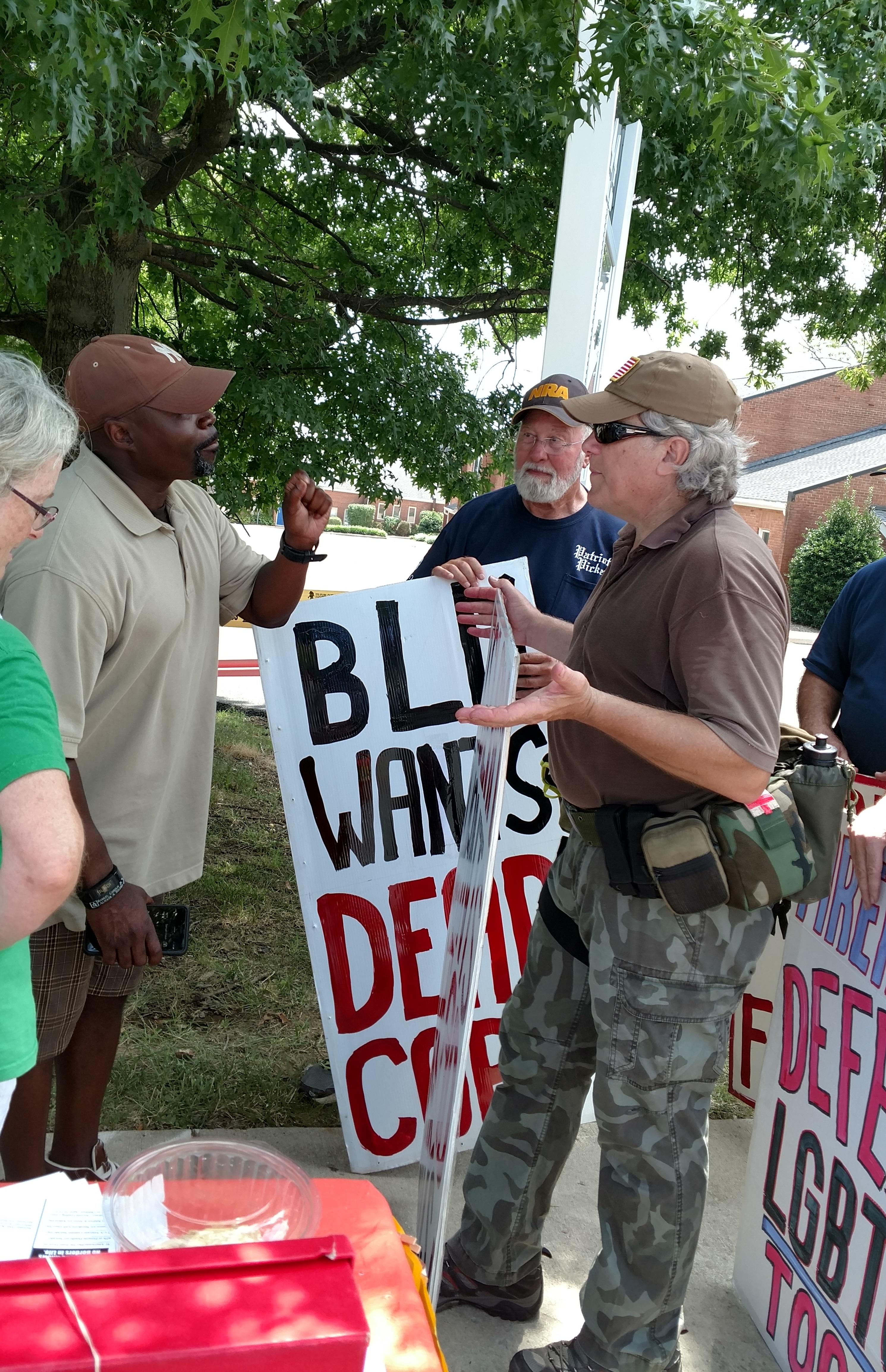 No one obtained a permit for the protest or counter-protest so the police were left to try to regulate each sides’ behavior without having the authority to order separate protesting areas.  There was a visable but small NRA security force ensuring that people did not prevent lawful entry by guests to the facility.  The headquarters is not a fortress, but is a fairly standard office building without surrounding fences.

Although this was the largest protest I have seen at this location, numerous members of the Patriot Picket identified the protesters’ crowd size as being between 200-300 people, far below their original expectations.

When asked about the NRA ad, one member said he thought the ad was spot on, and regarding the protesters: “It (the ad) must have hit home, I guess.” 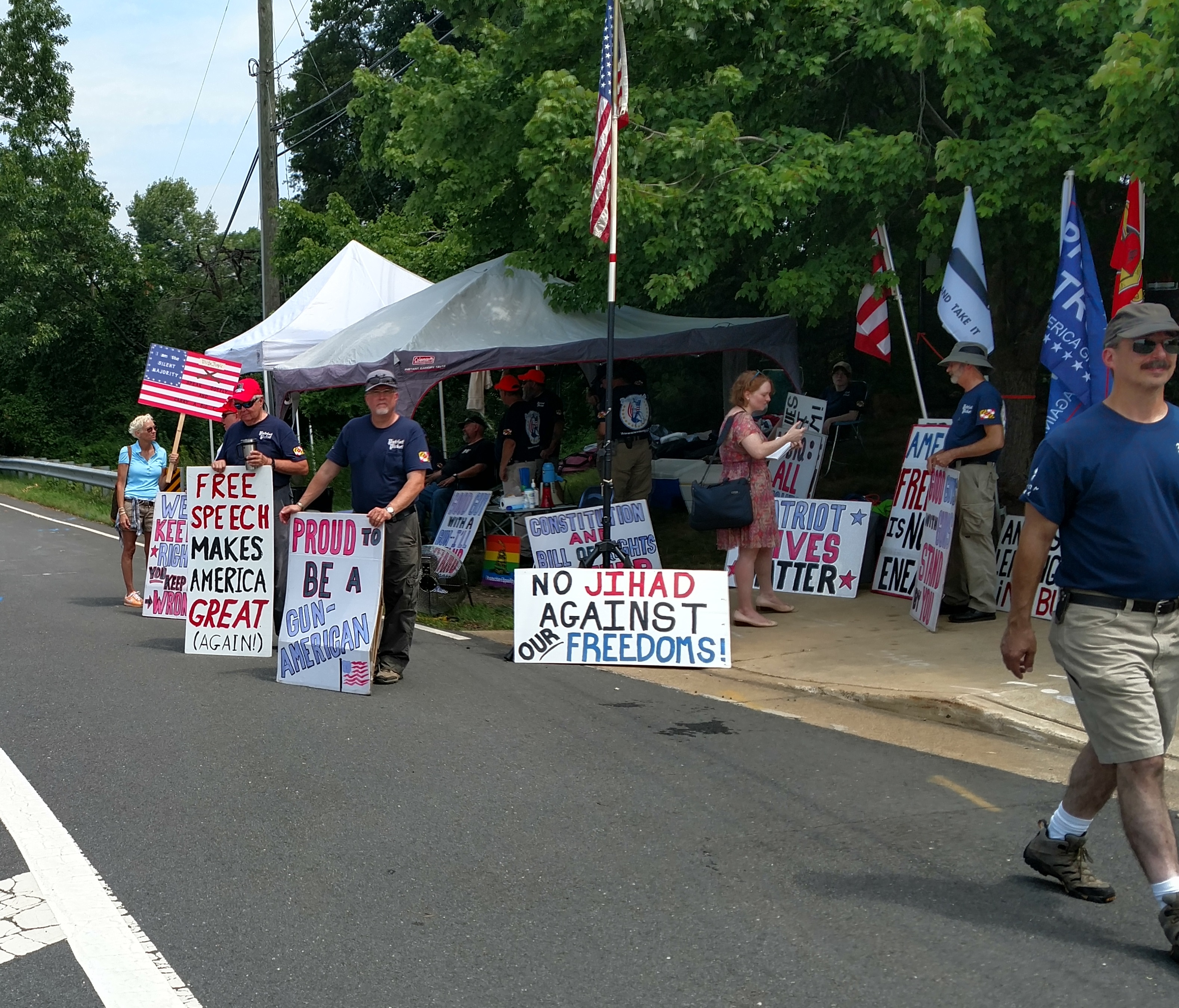 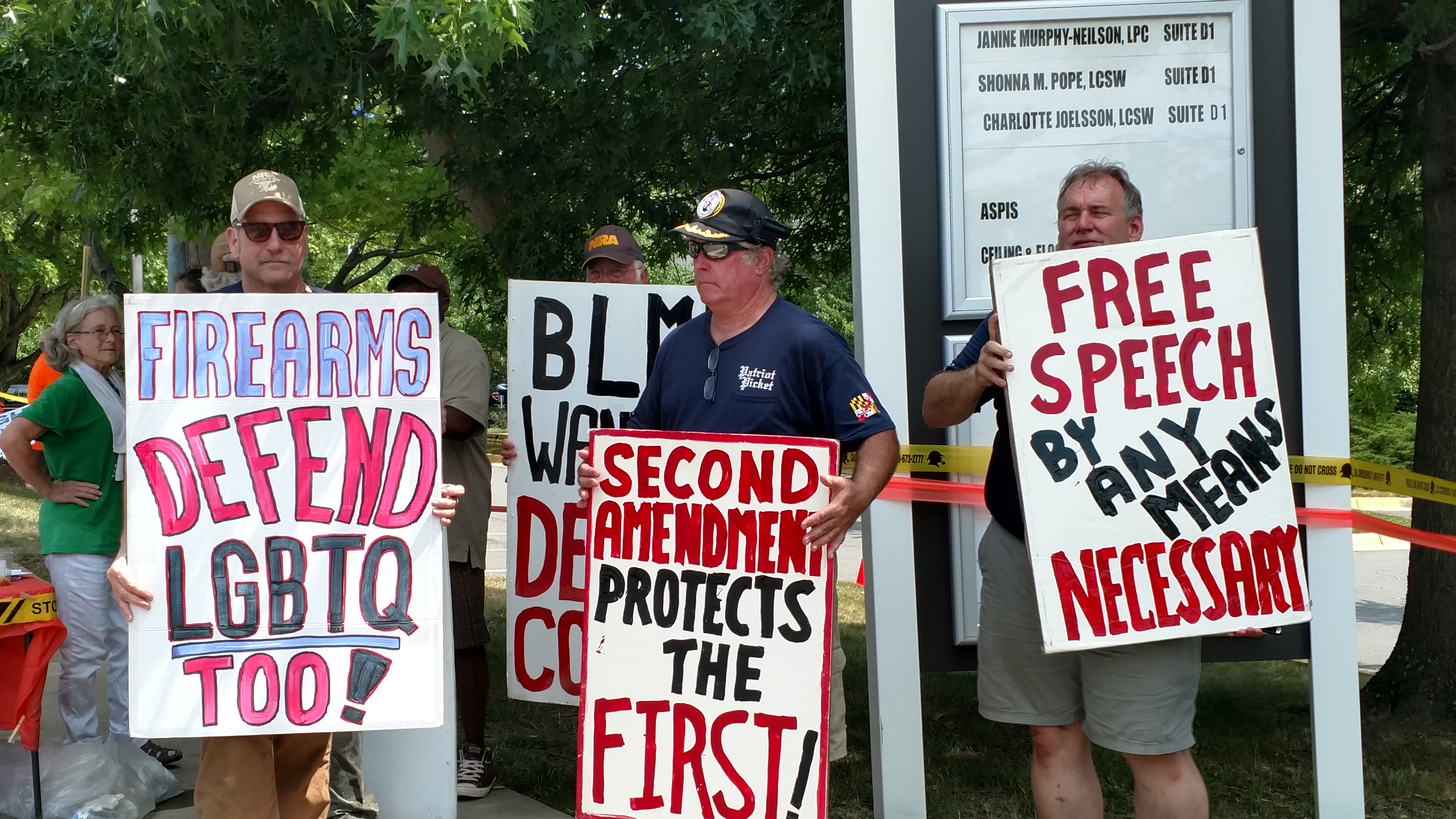 Free speech is on display here, and thankfully there were no major incidents, although the heat may have sucked the life out of most people.  I will take a brief moment to point out that both groups clearly supported the LGBT community, although the Patriot Picket was clearly supporting everyone through individual rights.

I obtained pictures of nearly the entire march to gauge how many will have to survive a march in a heat index over 100 degrees for 17 miles.  There supposedly is a single “safety bus” although I didn’t see it.  Pray that they survive the entire march or give up… 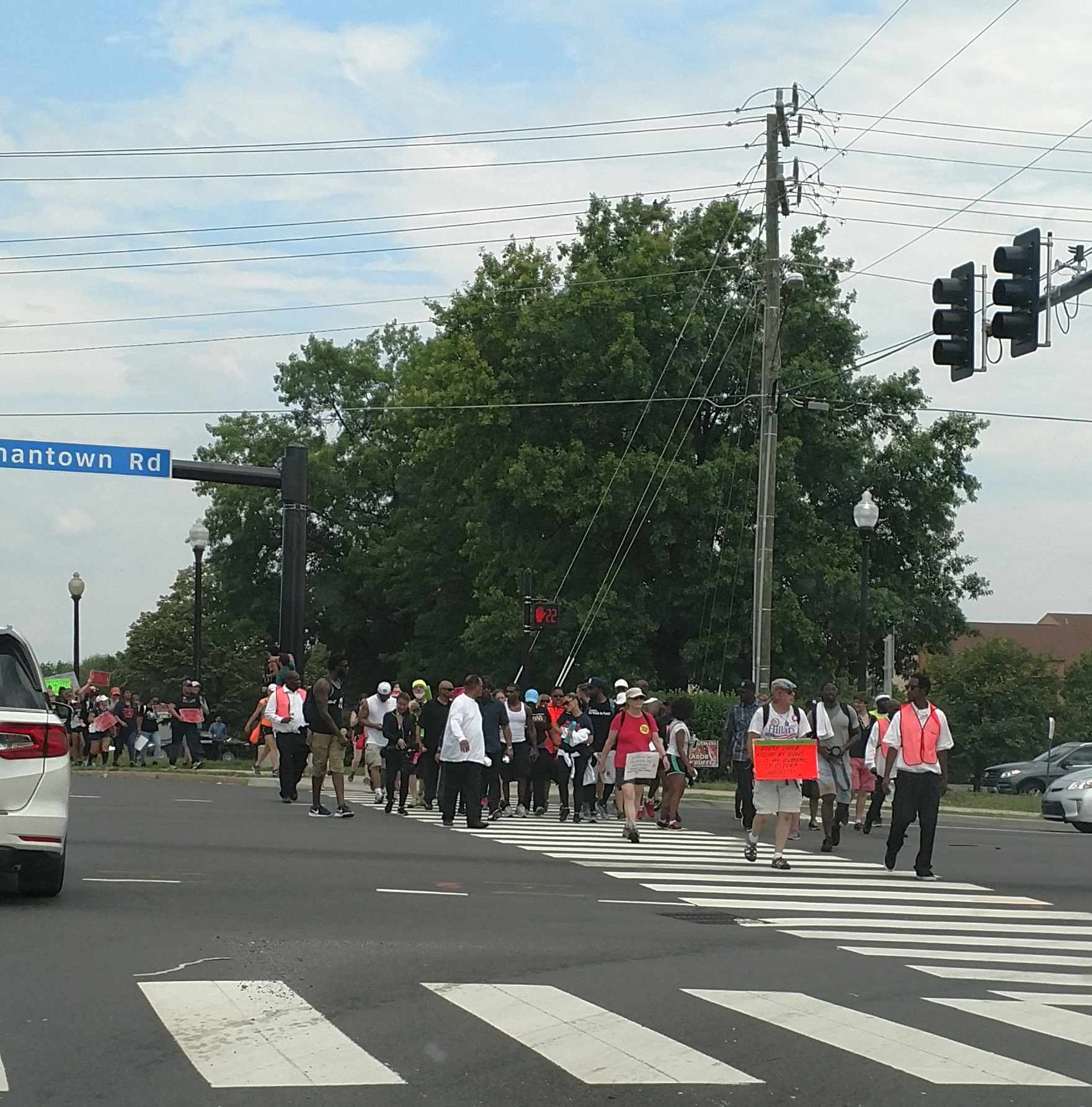 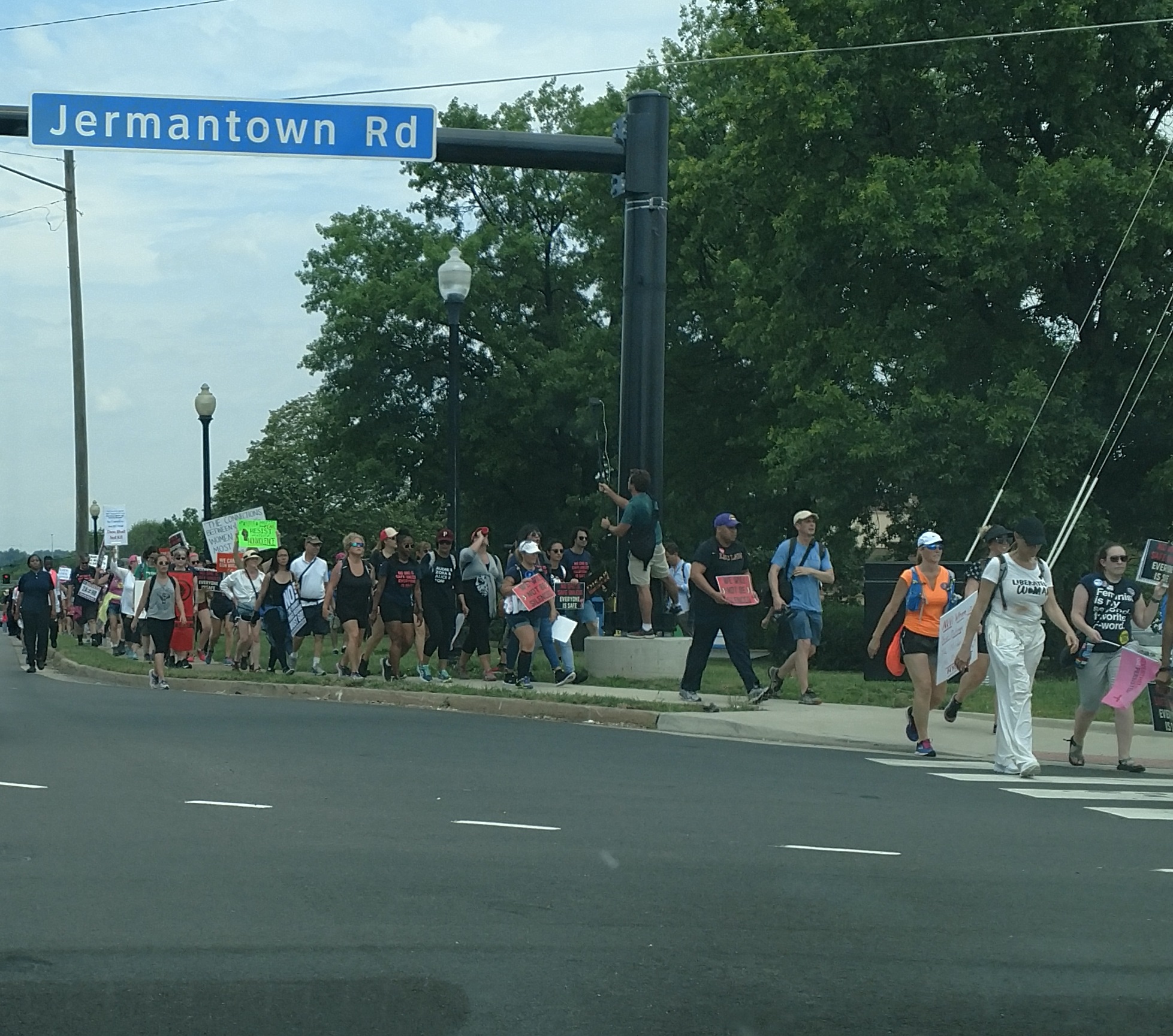 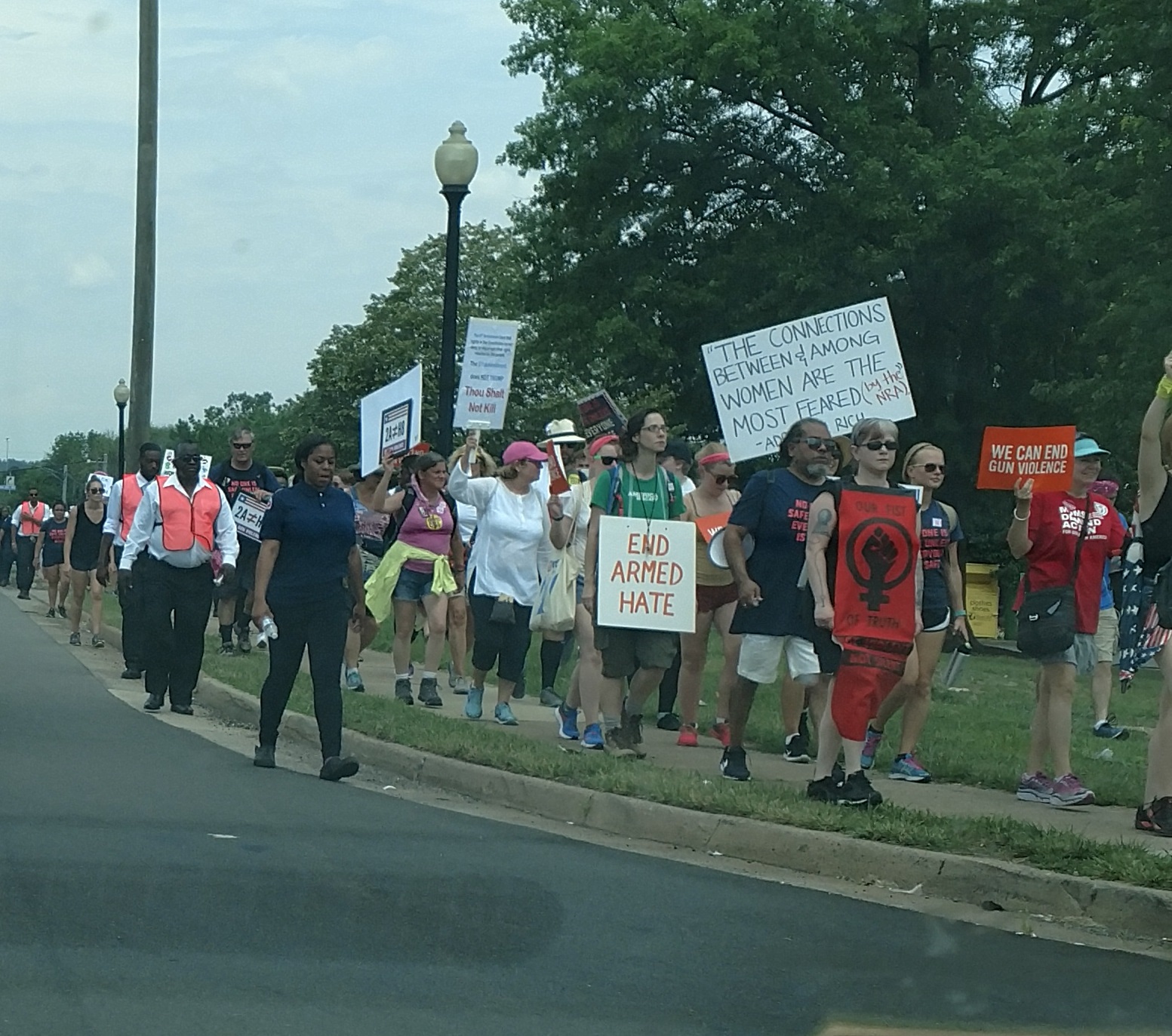 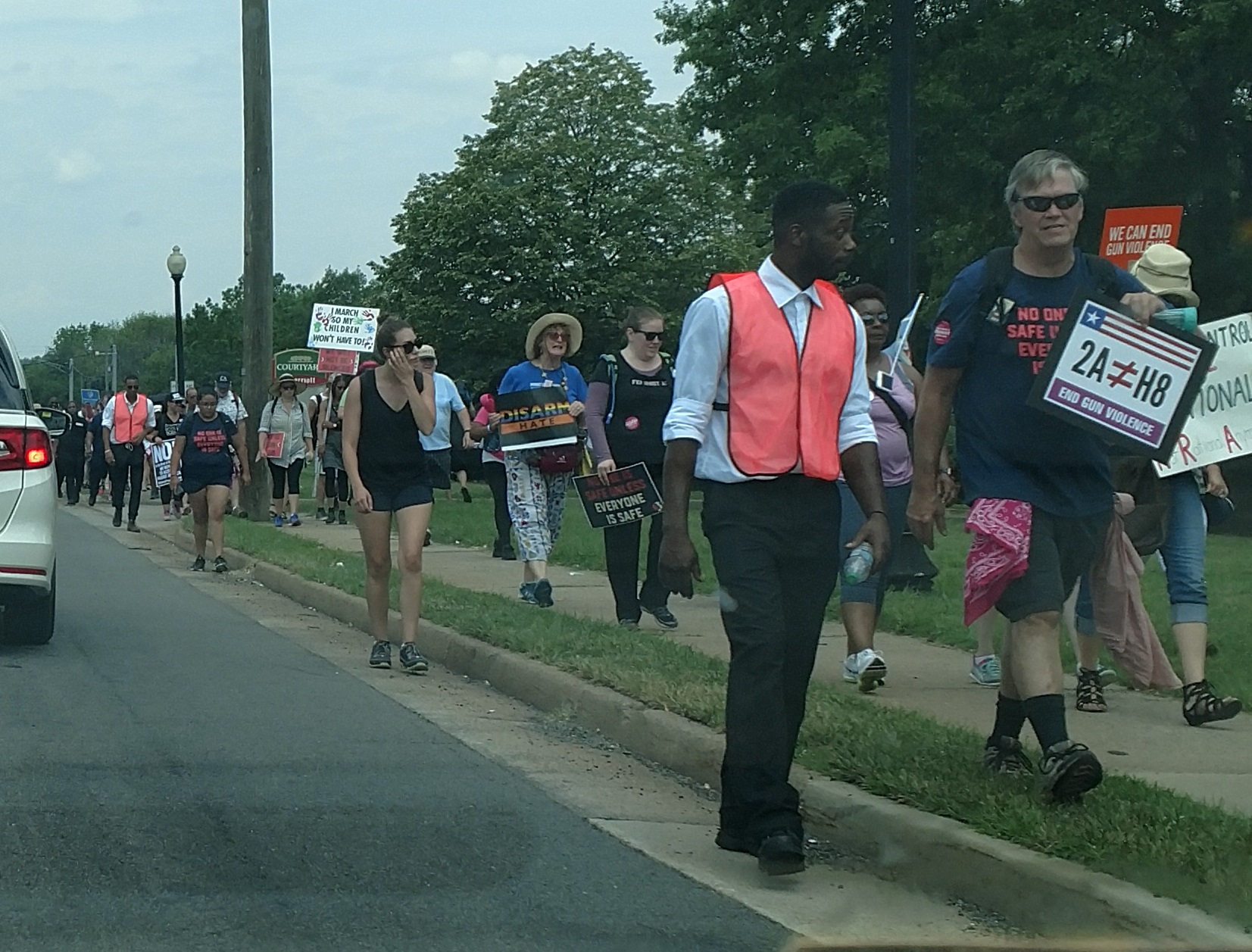 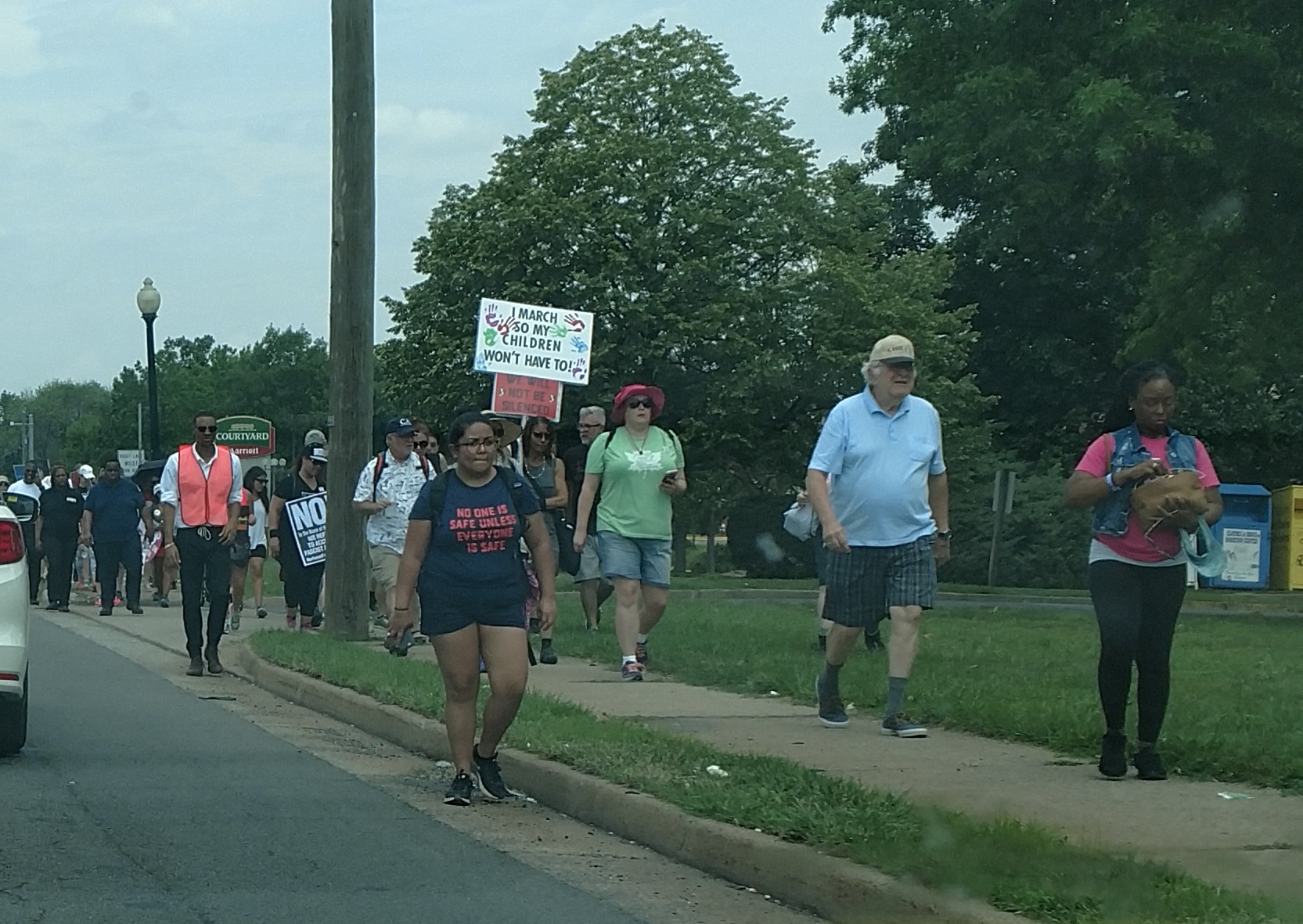 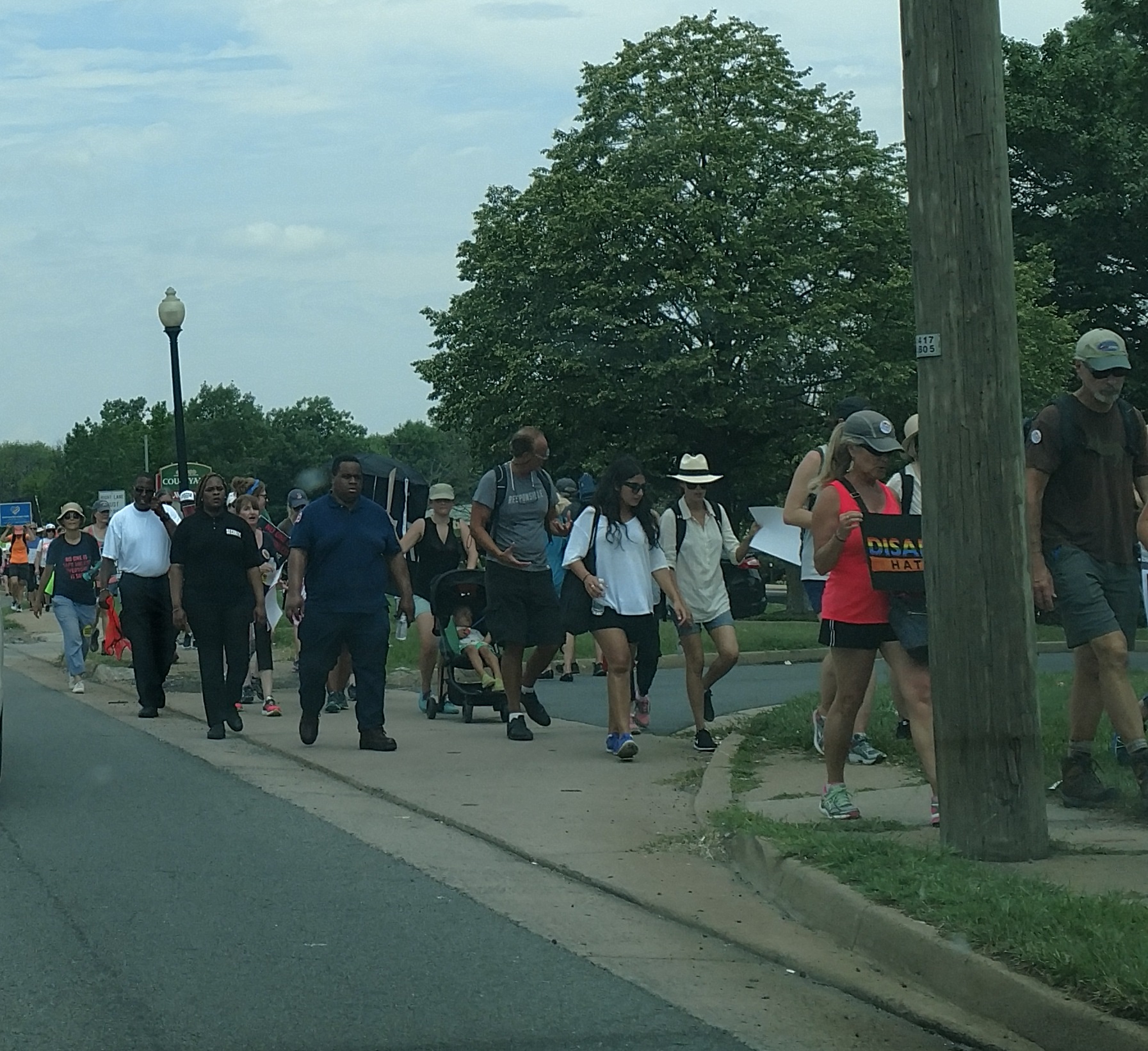 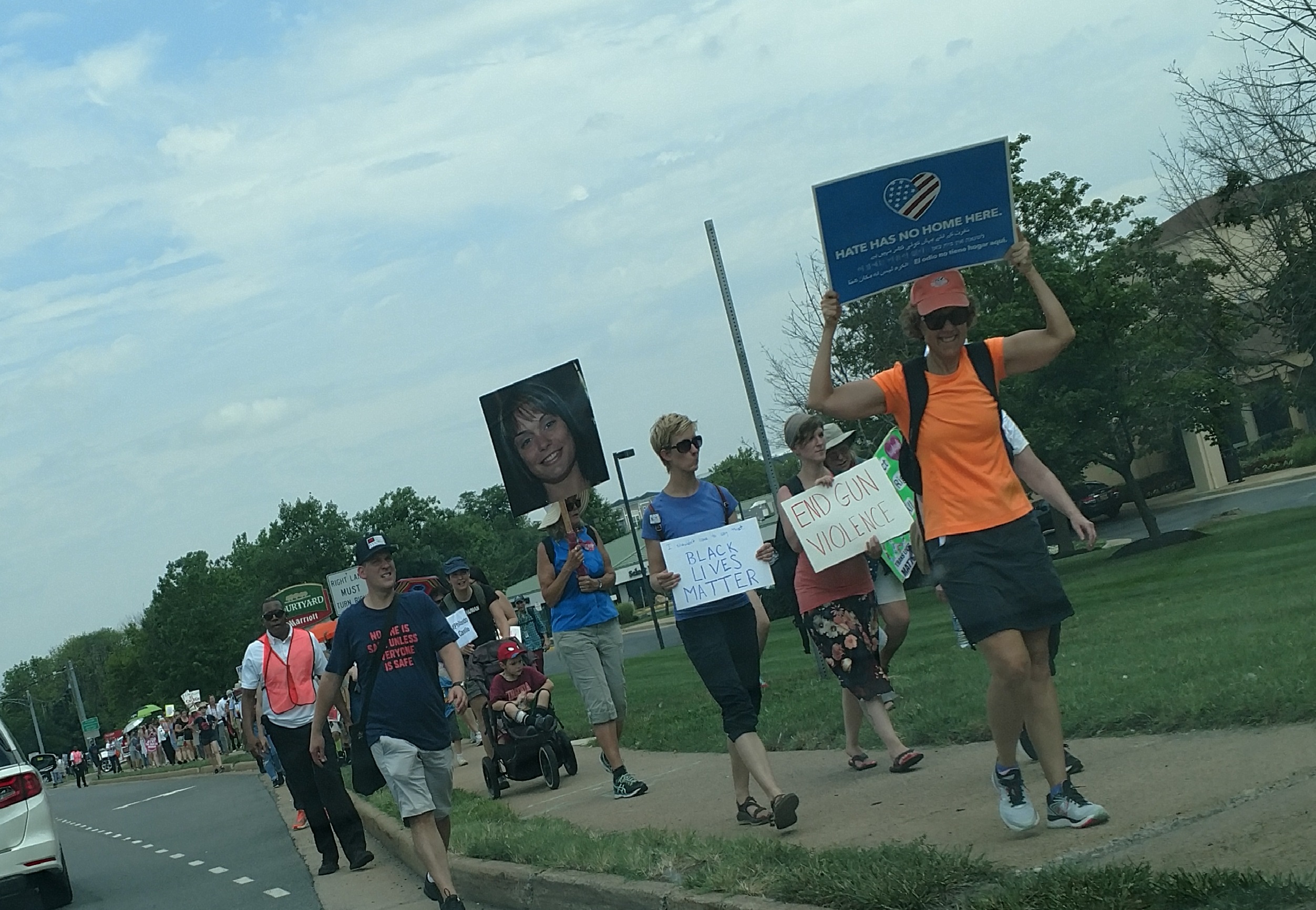 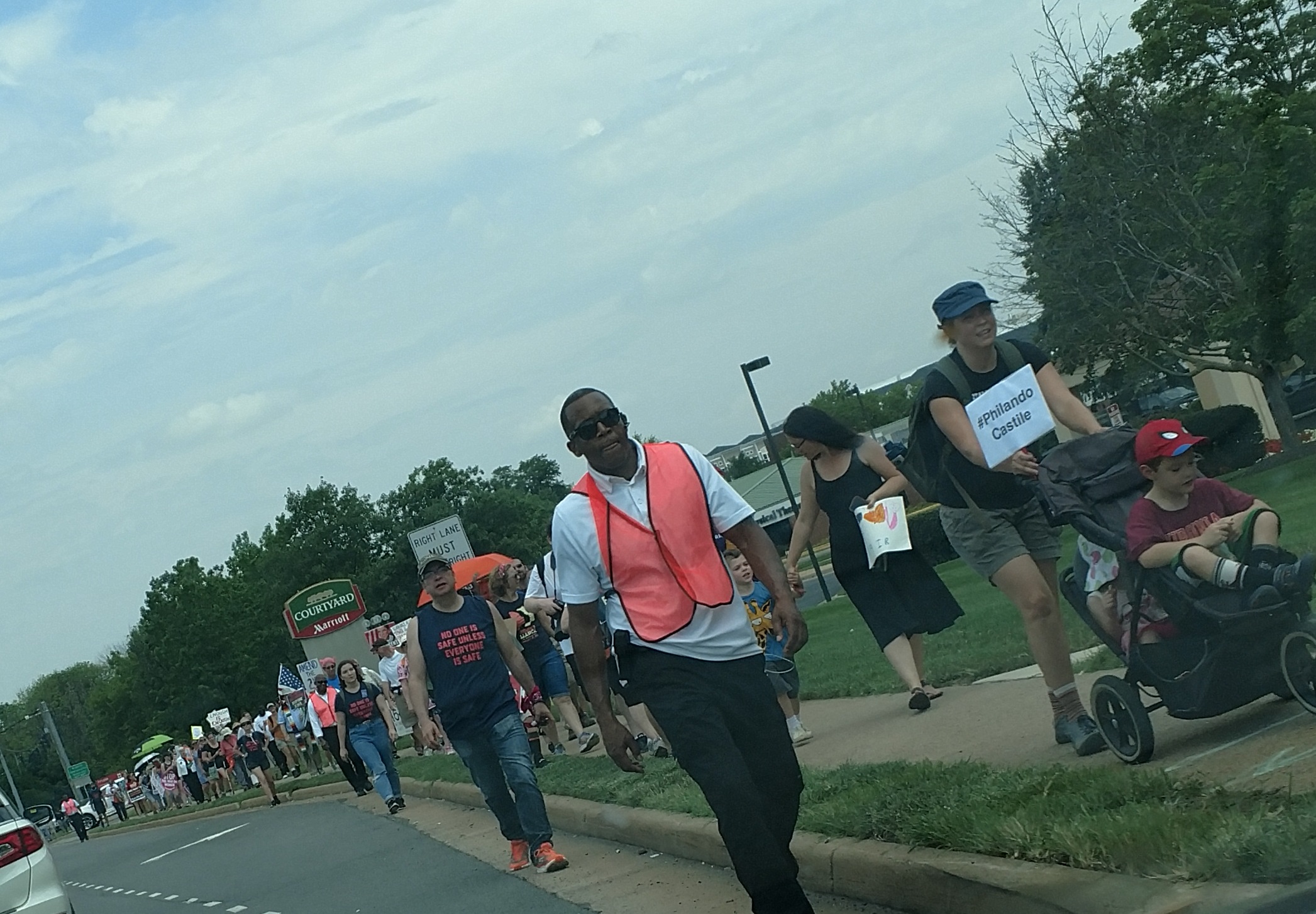 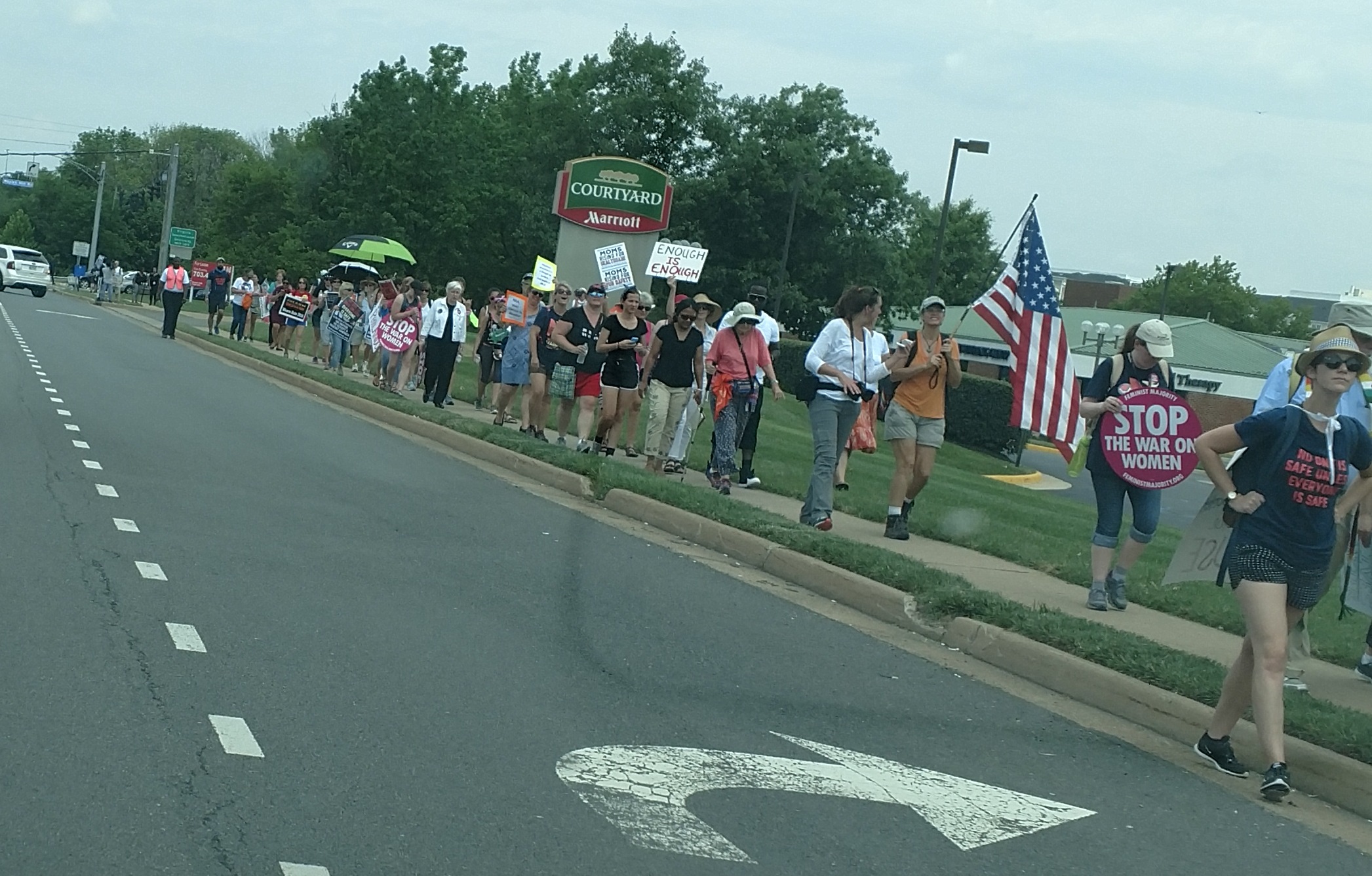 Amazing they didn’t kill any of their people by sending them on this foolish errand in high heat and humidity without any apparent logistical or medical support. By the time I figured they’d have people dropping like flies, thunderstorms opened up turning this into a mobile wet t-shirt contest, but at least that probably prevented all sorts of heat injuries. Now they get to march another 8 miles or so into DC with wet clothes and no change of socks or footwear, which brings up a whole different, if unlikely fatal injury scenario.

If I’d been working on this, the logistical support requirements would have necessitated a convoy of trucks and evacuation vehicles.