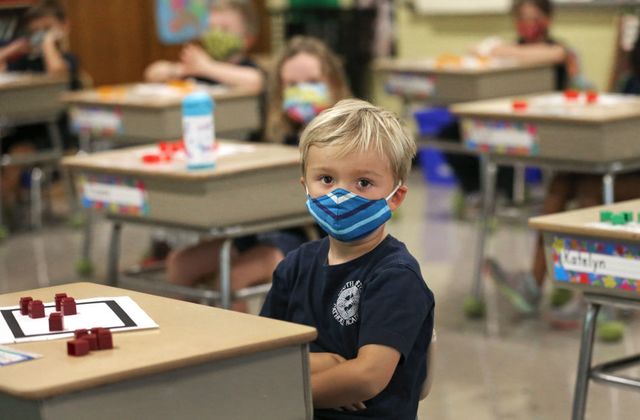 Wrestling Control Of Public Schools From The Loony Left

I’ve never been a fan of checkout charities.

You know how they work: The cashier loudly asks you if you want to round up to fight something like restless leg syndrome and you are shamed into contributing, even though you know this lets the Piggly Wiggly take credit for a fat check to charity.

Yesterday I was picking up notebooks at a Virginia Beach office supply store when the checkout clerk asked if I wanted to donate to “local schools.” He didn’t ask if I wanted to buy school supplies for needy kids, which I would have done in a heartbeat. He wanted to know if I’d like to lard something onto my bill for local schools.

“Nope,” I replied without hesitation.

Frankly, I don’t want to give one penny more to our Virginia Beach schools where the far-left majority on school board fought reopening classrooms last year. Where teachers are quietly being indoctrinated in critical race theory under euphemistic names. Or where the superintendent’s wife in 2020 posted a snuggly photo of herself and her husband to Facebook with an obscene message directed at then-President Donald Trump.

Still, I felt a little guilty when I left. So I gave the homeless guy in the median strip a few dollars.

“Thank you beautiful lady,” he said, sweat pouring down his face.

Hey, at my age you take compliments where you find them, even if it’s from a panhandler blinded by perspiration.

Statewide SOL scores were released last week and they were dismal. Virginia’s kids are falling behind, especially in math and science. Naturally, the hardest hit were schools in  poorer districts where the children trail the rest of the commonwealth anyway.

Is anyone surprised? Our governor was the first in the nation to close schools for the season in 2020 and he sucked his thumb as militant teachers unions fought to keep kids out of the classroom last year.

It wasn’t safe, they argued. Students might bring the virus into class and kill the teachers.

So teachers elbowed seniors and cancer patients to be first in line to get their vaccines to protect themselves.

Still, some Tidewater schools didn’t reopen until April. More than a year after they closed.

But the real reason I wasn’t feeling kindly toward public schools yesterday was that I’d just read bizarre remarks made by a union leader in a school district far from Virginia.

She’s Cecily Myart-Cruz, president of United Teachers Los Angeles (the union that orchestrated the first teacher strike in LA in 30 years in 2019 and that got Gov. Gavin Newsom to knuckle under and help squash new charter schools.)

In an interview, Ms. Myart-Cruz shrugged off suggestions that children have suffered during the prolonged school closures.

Have you ever heard such claptrap from a so-called educator?

If we don’t wrestle control of our schools from people who think like this—and soon— we’ll lose an entire generation of American children.

We don’t do it with symbolic gestures at cash registers, though. We do it at the ballot box.

For 75 years the Left has been turning government schools into God-hating, communist-loving indoctrination centers and, just now, the Right finally wakes up to it. It will be a long, long, hard struggle to wrest back control after decades of complacency that have handed education over to the Marxist regime. What can be done? Organize and fight for YOUR local school.

Education begins in the home. If you have parents committed to reading to their kids when young, encouraging book reading, and giving them a well rounded religious and moral upbringing, that’s most of the ingredients to making great kids and great adults. I have 2 of my own and they are very nice successful young adults now! Public schools only can go so far. And, how do we “wrest control of our schools?” How do we undo decades of mandates, federal and state, No child left behind, which means we teach to a test, and now, dealing with CRT-indoctrination? School boards hardly have the power. They are generally rubber stamps for the professional staff and they have little wiggle room — they spend most of the time on the budget and school boundaries. Parents who get involved are channeled to the PTA; they don’t have much influence over the curriculum. Parents don’t have unions; teachers do, and have paid lobbyists. I encourage conservatives to run for school board, and please read my book on getting elected to local office (www.kenreid.org) But it’s going to take a significant national effort within the educational establishment to make the changes Kerry is pining for

“Frankly, I don’t want to give one penny more to our Virginia Beach schools where the far-left majority on school board fought reopening classrooms last year. Where teachers are quietly being indoctrinated in critical race theory under euphemistic names.”

No CRT is going on, get your head out of your…….

lol….yeah, militant uniona………..in the right to work (for less) state of Virginia, where teachers have about as much influence as a blade of grass and where it is illegal to strike.

You sure can obliterate your credibility pretty quickly, it seems

You missed a comma. After the “No”

haha, nice try. My wife has been a teacher for 16 years, we kinda have a clue as to what is going on in the classroom

Look at the above picture of all those little kids wearing masks. If you think your wife has a clue, she doesn’t. She is just following insane orders for politically correct purposes.

It is absurd that little kids are wearing masks and will do so for years if you have your way. Since your wife is the family expert how many years is she willing to support this mask charade.

I imagine as long as necessary