Yesterday and today WWII veterans, many in wheelchairs, were forced to tear down barricades to their own monument in Washington DC. Â More guards have been sent to ‘protect’ this memorial from WWII vets than were sent to protect our brave men in Benghazi! Â Some of these veterans had their trips planned for years through Â Honor Flights, Â a charitable group that provides WWII veterans with flights to Washington and volunteer escorts. Now those Â WWII veterans are subject to arrest because the President has refused to keep open their memorial. Â Another elderly Vet Â from New York who had traveled to Ohio to see the plane he had flown in WWII was also turned away from that museum.

Meanwhile Vice President Joe Biden (holding the job that a previous office holder deemed ‘not worth a bucket of warm spit’) cannot get by with a staff of less than 12 absolutely essential aides, not including his Secret Service Team. Â  The White House will struggle on a staff of a mere 436 ‘vital employees’, down from the usual 1,701. Â  Even Buckingham Palace, which is 12 times the size of the White House, only employees 800. Â The normal 90 people it takes to maintain the President’s private living quarters will be slashed to 15. Â (What do 90 people do on a daily basis? Â Are they each assigned one table to dust and polish? Â And 15 to make his tuna sandwich for lunch? Â Are there 12 people assigned to helping him dress?)

The First Lady’s staff has also been cut but we have not been told how many of her 16 to 20 assistants have been furloughed. Â At least four of those assistants make a six figure salary. Â Now we learn because of those furloughs Michelle Obama will no longer be able to keep up with her Twitter account. Â Rather than posting every two days as she does now, she will be reduced to only Twittering once every four days.Â  I am shocked and horrified that our government has been reduced to such cuts. Â Imagine having your Twitter assistant furloughed!

What is truly scandalous is the President was made aware of these Honor Flights, and their requests to visit their Memorial, and he said no. Â Shame, shame, shame on him. Â He can’t provide a few Park Rangers to keep open an outdoor memorial to the Heroes of the Great Generation Ever? Â Â How difficult would that be? Â Surely the President could sacrifice one or two of his 90 personal at-home assistants to honor these heroes. Â If he cared. Â He obviously doesn’t. 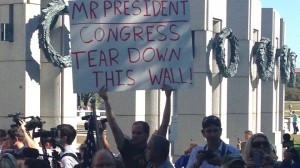