Latest Posts
Bernie wins Nevada and heads to Loudoun County
Salaries of Loudoun’s top paid public employees
The Truth About Myself and Ben Cline
Democrats in the General Assembly punishing law enforcement
Progressivism causes racial achievement gaps
Is Virginia about to violate the Constitution using...
March of the Mystery Candidates 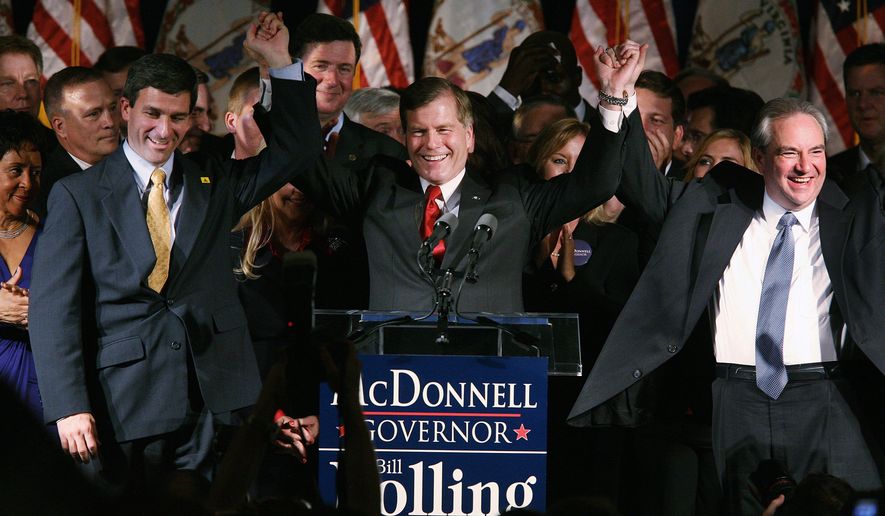 Yes, it was about Trump – but also GOP failure to change the campaign’s focus

Just when you thought we had concluded talking about the Nov. 8 shellacking Republicans got in Virginia, I now bring to you another comment about why I think we lost.

I agree with Mick Staton’s thoughtful piece showing that Ed Gillespie, Jill Vogel, John Adams and at least 15 Republican delegates lost to the Democrats due to President Trump’s unpopularity and a surge in anti-Trump Democrat votes, mostly in the higher-income suburban areas of Northern Virginia, Hampton Roads and the Richmond-Henrico-Chesterfield region.

I, as a supporter of the President and his agenda, who as 10th District chairman for Trump tried (and lost) to prevent Mick Staton and other “Cruzers” from being elected delegates to the Republican National Convention, will also admit that it was not due to felons and illegals voting, nor a surge in minority voters, as Mick noted

I also will agree with him that a stronger pro-Trump candidate on the ticket would not have helped either.

However, I firmly believe Gillespie and the Republican Party of Virginia should have seen the writing on the wall when Trump was trounced by Hillary Clinton in November 2016 and when Democrats outvoted Republicans in the June primary by 47%.  They should have anticipated this was going to be a referendum on Trump, but failed to have any sexy transportation or education or jobs issue that could have captured suburban professional voters – staunch pro-life conservatives Bob McDonnell, Bill Bolling and Ken Cuccinelli did in 2009.

Gillespie had tons of policy statements for the 2017 race, but nobody knew about them.  He ran anti-MS 13 ads in Northern Virginia so Hispanic voters could see them.  Dumb.

All voters knew was they had to vote against Trump because Gillespie offered no reasons to vote FOR something, so they voted AGAINST something.  Indeed, turnout was greater and it was Democrat turnout – but Ralph Northam was a bad candidate as was Creigh Deeds.  Most of us thought Ed was going to pull it out based on the polls.

What’s ironic is that after the “McBolliNelli” sweep in 2009, which included carrying Fairfax, Loudoun and Prince William counties – going against a trend toward Democrats – Gillespie outlined the strategy in this account in the Washington Post  .  See what I highlighted and tell us what appears to be key advice Gillespie failed to follow in his own campaign:

After losing Virginia’s governorship for the first time in eight years, some Democrats are trying to console themselves that Virginia is at its core a “red” state. This ignores not only that they won back-to-back governorships but also that Democrats defeated a sitting senator in 2006, took control of the state Senate in 2007 and won an open Republican Senate seat and three House seats in 2008 while carrying Virginia’s electoral college votes for the first time since 1964.

Some in the White House are trying to deflect blame for the defeat by saying that Sen. Creigh Deeds lost because he didn’t embrace the president and his policies. This ignores how much the Obama administration’s support for cap-and-trade, organized labor’s agenda, government-run health care and rampant spending hurt the Democratic nominee with independent voters.

And some Republicans are concluding that the Virginia governor’s race was a referendum on President Obama and that we can make major gains in next year’s midterms simply by running against him. This ignores the fact that while Gov.-elect Bob McDonnell benefited from voter concerns over Congress and the White House, he ran on a positive, detailed policy agenda.

There are lessons in the Virginia governor’s race for both parties, but Republicans nationally would do well to take a few pages from McDonnell’s playbook. Here are five:

— Convert conservative principles into practical policies — and finish the sentence. All year, McDonnell laid out a steady stream of policy initiatives rooted in a commitment to lower taxes, less regulation and innovation. Too often, however, Republicans don’t “finish the sentence” and remind voters outside our base why such conservative policies are better. McDonnell’s campaign attracted crucial independent voters by focusing on the benefits of his policies: better elementary schools, more college degrees, less time stuck in traffic, more affordable gas and electricity, and most important, jobs, jobs, jobs.

By Tuesday, voters gave McDonnell a sizable lead when it came to handling every critical issue facing Virginians, and he can now claim a mandate for his agenda.

— Run inclusive campaigns. When The Post reported on what is now the most famous graduate thesis in America and Democrats attacked McDonnell as “anti-working-women,” a broad grass-roots network of “Women for McDonnell” was in place to respond through e-mails, Facebook postings and conversations with friends and co-workers, making sure Virginians knew the Republican nominee’s record of promoting women.

Instead of indulging in the anti-immigration rhetoric of past Republican campaigns, McDonnell appealed to the growing Hispanic and Asian American enclaves of Northern Virginia, where his message of entrepreneurship, educational opportunity and strong families resonated.

As a member of the House of Delegates, McDonnell worked with community leaders to narrow the gap in sentencing between crack and powder cocaine. As attorney general, he rallied the commonwealth’s law firms to donate to food banks, forging relationships in traditionally non-Republican areas. During the campaign he worked to earn the endorsement of lifelong Democrat Sheila Johnson and appealed to former Democratic governor Douglas Wilder, who ended up withholding support for Deeds.

McDonnell’s performance among female and minority voters contributed to the biggest victory margin for any governor since Virginia became a two-party state.

— Use language voters want from their elected leaders. When asked to comment on the president campaigning in Virginia for his opponent, McDonnell responded that “the president of the United States is always welcome in the commonwealth.” In addition to citing the litany of issues on which they disagreed, he noted his agreement with the president’s support for charter schools.

When a GOP candidate for the House of Delegates referred to the Obama administration as “domestic terrorism at its worst” and said that if Republicans fell short at the ballot box, we might have to resort to “the bullet box,” McDonnell made clear that her comments were not representative of Republicans he’d been talking with and that he would not campaign for or with her.

McDonnell was critical of his opponent’s policies, but Deeds’s attacks frequently were harshly personal. Voters expect the former but reject the latter.

— Match the left’s use of technology. The Obama campaign blazed electronic trails in 2008, and the McDonnell campaign sought to adapt to the new contours, beginning with an online announcement of his candidacy and a message to “Text VA to GOBOB” on banners and yard signs. Between social media networks, texting and e-mail, the campaign was regularly in direct contact with more than 200,000 voters — impressive, especially given the low turnout on Election Day. In addition to the campaign’s efforts, the Republican Party of Virginia did an excellent job of driving coverage and perceptions of Deeds through creative Web videos.

— Back strong candidates. Elections are ultimately choices between two people vying for the same job. Bob McDonnell was, hands-down, the superior candidate. Virginia’s next governor proved to be a principled, disciplined, energetic, idea-driven, articulate and personable candidate — characteristics that will serve the commonwealth well over the next four years.

The question now is where do Republicans go from here in Virginia, given the changing demographics and prospect of Democrat control in Richmond. Well, that may be a future column.

The Truth About Myself and Ben Cline