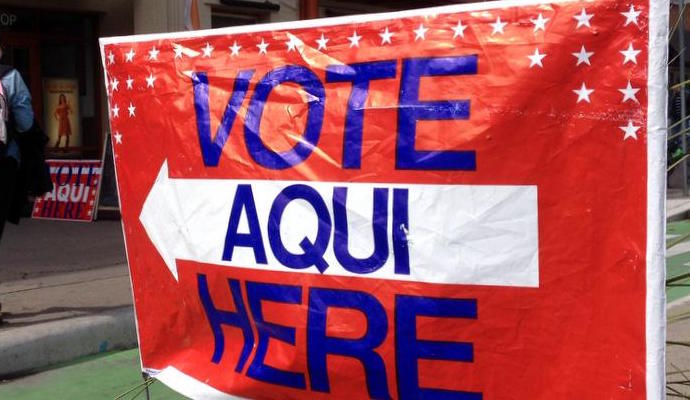 Yes, Virginia, Non-Citizens are Voting in Your Elections…

For a long time, conservatives have decried apparent efforts by Democrats (and the left in general) to facilitate voter fraud, including by clearing a path for non-citizen voting in our elections.  The left typically replies by alleging the idea of non-citizen voting is a myth, and that photo ID requirements (among other election integrity measures) are a “solution in search of a problem.”  Even worse, according to just about every speech a Democrat legislator has ever given in response to election integrity legislation, is that such efforts by Republicans are racist. Shocker.

Thus sufficiently chastised, Republicans (with notable exceptions) have generally gotten out of the way of Democrats and leftists who’ve continued to grease the skids for the corruption of our elections, and the facts indicating voter fraud is not a myth just keep piling up.  Just this week, in fact, stories have come to light about the Cascades Mall shooter (an apparent Hillary Clinton fan) having voted three times as a non-citizen, and the efforts of a Harrisonburg, Virginia member of the Young Democrats to register a number of dead people as voters. (Unfortunately for him, someone in the local registrar’s office recognized one of the new voters as a recently-deceased prominent citizen).

In most jurisdictions around the country, where there is political will to do something to fight it, the well-oiled leftist machine mobilizes to tie up the efforts in court.  In others, where government is divided and gridlocked, or dominated by Democrats, the “problem” is viewed positively, and no action is taken.  Such is the case in Virginia, where Democrat Gov. Terry McAuliffe must deal with a GOP-led General Assembly.

So, when the legislature is bottled up by the veto pen, and the executive branch benefits by abetting the corruption, who is left to defend the foundational principles of our electoral system? In Virginia it comes down to the independent elected prosecutors in each city and county: the Commonwealth’s Attorney.  In the present circumstances, they are the only means of halting this abuse.  If they take their oaths seriously, they must no longer ignore a problem that constitutes a real and present danger to our democratic self governance.

Fairfax: The Tip of the Iceberg

In 2011, Hans Von Spakovsky, as chairman of the Fairfax County Electoral Board, discovered rampant non-citizen voting in that county, Virginia’s largest locality:

In checking with the Virginia Department of Motor Vehicles, the board had discovered 278 registered voters who, when they got their driver’s license, had told the DMV that they were not U.S. citizens. Before we cancelled any of the seemingly illegal registrations, we gave all of these voters the opportunity to confirm their citizenship. None of them did so. Almost half of them (117) had not only registered to vote, they had in fact voted in state and federal elections.

The Fairfax Board referred the violations to the Justice Department.  Unsurprisingly, the referral fell into a bureacratic black hole, and nothing ever came of it.  Likewise, the Democrat local Commonwealth’s Attorney also declined to do anything about it.  Still more voter fraud was ignored in 2015, when Fairfax referred to law enforcement voters registered in both Maryland and Fairfax County who had unlawfully voted twice—once from each location—during the 2012 presidential election.  These voters are among the estimated 44,000 people registered to vote in both Maryland and Virginia.  Again, the Democrats in charge of enforcing the law declined to act on this problem.

And it is a problem.  A 2014 study by a pair of Old Dominion University professors found that fully 6.4 percent of non-citizens in the United States voted in 2008, with 80 percent of them favoring the Democrats, well more than enough to be the deciding factor in close races.  Before concluding that these numbers are inflated in some way, consider this: according to Del. Bob Marshall (R-Prince William), 9,006 persons were removed from Loudoun County’s jury pool from 2009-14 because they were not citizens, and Norfolk removed 1,223 persons from juries for lack of citizenship in a single year.  But, both of these localities (like most of the rest of Virginia) draw their jury pools from lists of registered voters, meaning that all 10,000 of these non-citizens from just two jurisdictions in the state were illegally registered to vote.  (Loudoun and Norfolk subsequently removed these people from voter rolls, but there was not a single prosecution for either unlawfully voting/registering to vote, or for perjury by claiming to be a non-citizen to escape jury duty).

It’s not just a NOVA thing

One might be tempted to think that, because Fairfax and other Northern Virginia localities have a higher percentage of residents who are non-citizens, the problem is isolated there.  That would be wrong.  Information received this year from the Public Interest Legal Foundation, a non-profit group focused primarily on election integrity, shows that the problem is widespread across the Commonwealth.

The Foundation, pursuant to the provisions of the National Voter Registration Act of 1993 that require local election officials to provide list maintenance records to the public, has attempted to sample 20 localities around Virginia.  Of those 20, at least six have complied, revealing well over 500 non-citizens registered to vote.  According to registrars who spoke to TBE on condition of anonymity, a large proportion of those non-citizens have participated in recent Virginia elections, including the 2013 General Election where Attorney General Mark Herring edged out Sen. Mark Obenshain (R-Harrisonburg) by less than 1,000 votes in a statewide recount.  These six jurisdictions include Fairfax City, Prince William, Stafford, Bedford, Hanover, and Roanoke.

Resistance from the Top

The McAuliffe administration has made clear that it intends to do everything possible to make eligible to vote as many people as possible who the law says should be ineligible.  By unconstitutionally restoring felons’ voting rights, or by the McAuliffe-controlled State Board of Elections attempting to make optional the requirement to declare U.S. citizenship on a voter registration application (kudos again to Sen. Tom Garrett for leading the fight on that), or by vetoing a bill that would have allowed voter registrars access to lists of voters who are excused from jury duty because they are non-citizens…at every turn McAuliffe attempts to advantage Democrats at the polls this November by diluting the votes of actual qualified citizens with the votes of people who have no business being at the ballot box.

The attempt to keep non-citizens on the voter rolls and able to support Hillary Clinton has most recently manifested itself in instructions from Commissioner Edgardo Cortes, of the State Department of Elections.  According to several of the registrars who received information requests from the Public Interest Legal Foundation, they were told by Cortes and/or his staff to not respond to the valid requests, made in accordance with the National Voter Registration Act.  According to these registrars, despite the fact that the obligation to comply lies with the registrars themselves, Cortes says the Department of Elections will make a single response on behalf of all the counties receiving such requests.  No such response has been forthcoming, of course, and if you think one will be made before November 8, you’re living in a fantasy world.  This is nothing more than a tactic to delay compliance to beyond a date where it might actually make a difference.  Cortes was appointed to his position by none other than original “Friend of Bill,” Governor Terence R. McAuliffe.

Every vote by a non-citizen—regardless for which candidate the vote is cast—cancels out the vote of a citizen who is entitled to the franchise.  Even without considering that these votes are numerous enough to have practical consequences, especially in very tight elections, the principles of self-governance and equal representation are mortally undermined when our political and law enforcement leaders knowingly allow us to, in effect, be governed by people from other countries.  It is time for it to stop, and Virginia can lead the way.

Call your Commonwealth’s Attorney and ask him or her to step up and lead.  Yes, some of these cases can be hard to prosecute (but less difficult if it can be shown the illegal voter participated in an election after Virginia’s photo ID requirement came into effect).  Yes, there are other competing priorities.  But the sacredness of the electoral franchise is fundamental to our system, and the Commonwealth’s Attorneys are the only ones who have the ability to take meaningful action.  And it won’t take a thousand convictions to make a difference…all that’s needed to end the era of voter fraud impunity is for the entire population of non-citizen voters to take note that what they’re doing is illegal, and might land them in jail.

If your Commonwealth’s Attorney ran as a Republican, then engage your local Republican committee to call on their nominee to fulfill his oath of office.  Engage your neighbors, members of your church or civic group, and get them to demand that action be taken to stop this lawlessness NOW, before November.

In the meantime, more detail about the Public Interest Legal Foundation’s efforts in Virginia will be forthcoming in the near future.  Stay tuned to TheBullElephant.com for details as this story unfolds.

UPDATE 1:  For those wondering about what Virginia’s Photo ID requirement does in this regard, it is fairly effective in keeping the “undocumented” non-citizen from voting (because, obviously, they don’t have valid identity documents).  However, most non-citizens in this country came here on a visa.  Many have overstayed those visas, and many have attained permanent legal resident (green card) status, and that’s all that is required to get a valid ID for voting purposes.  So, for instance, Person X comes to Virginia on a student visa, gets a driver’s license, and a few years later goes to a Bernie Sanders rally on campus where they register to vote, and then they vote in the March 1 primary.  We have no way of knowing Person X is not a citizen until some other event occurs.  For example, when Person X’s driver’s license is about to expire and he goes to the DMV to renew it, and on that form indicates he’s not a citizen of the United States.  In doing so, Person X has created an evidence trail indicating he has violated both Virginia and federal law.  It is an evidence trail that some patriotic and enterprising Commonwealth’s Attorney should follow immediately.