“You can do whatever you want with your property, as long as it is what WE want you to do!” ~ From your friendly York County Supervisors.

I’ve known Greg Garrett and his wife for 25 years. Our families went to church together in Hampton Roads when I was a teenager and they continue to be close family friends. I have watched in amazement and with a great deal of admiration while Greg has fought a costly battle to defend our most basic rights as American citizens – private property.

The short story is that Greg Garrett owns property that is zoned agriculture that sits at the mouth of the York River and Chesapeake Bay. It is a stunning piece of property where he raises what he fondly calls, “Forbidden Oysters (TM),” because the local government keeps trying to outlaw his farming business. Greg obtained 10 different permits in order to have this aquaculture business, but the county decided to require a 11th permit to prevent him from doing business. Mind you, he can freely raise smelly pigs (and I can attest to their smell at my own farm), but those noisy, smelly, obnoxious oysters that just sit at the bottom of the river – OUTLAWED!

Greg Garrett sued the county and won, but the county appealed and won on a technicality. The General Assembly decided to get involved and they passed an almost unanimous (128-5), bi-partisan bill to overturn the courts and make sure that aquaculture and agriculture are treated the same way. So how does the county respond? They are trying rezone Greg Garrett so he won’t be agriculture anymore before this new General Assembly law takes affect!!!

If you want the three minute overview of this case, I strongly encourage you to watch this short John Stossel interview with Greg Garrett. 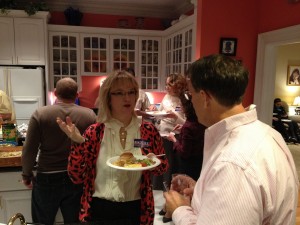 Eating Forbidden Oysters (TM) at the Garrett fundraiser in their home

Greg and his wife held a fundraiser for me at their house when I was running for U.S. Senate and my family had the opportunity to eat some of these Forbidden Oysters. I was a rebel with a cause, eating those oysters three different ways – steamed, grilled, and baked! It was rebellion on a plate!

Now you can join in the rebellion. A Pitchfork Rally is being held tomorrow before the York County Planning Commission meets at 7pm. I will be there to stand alongside my friend! Please join me and show your support for private property or you might discover that you are the next target.

[…] I wrote extensively about this situation last month. The short story is that York County has been a farming community since the English first traveled across the Atlantic Ocean to settle here. Many landowners are zoned agriculture, but the county has been in a multi-year battle to strip them of their farming rights because of a few disgruntled neighbors. Farmers won in court in their initial lawsuit. The county appealed and won on a technicality (aquaculture versus agriculture) that created a setback for these farmers. The General Assembly passed a law last year to resolve any ambiguities by clarifying that farming is both aquaculture and agriculture. […]

How about some followup on this?

Wait…was this the guy who was running a commercial operation from his AG property? If it is, that is why he lost. If it’s not, my apologies.

The county can not down zone piece meal. If they do, he will win in court. I remember this story a while back, and while the details are fuzzy, I think there is more to it. The county can deny him a special use permit. They can change the language of the ordinance. If he does not like the SC decision, he needs to go to the GA and have the law amended so it covers his property. Making aquaculture AG is a no brainer, but it looks like it wasn’t specific enough to cover this man.

Another Radtke article with little real information. Along with Schoeneman’s question, I want to know what this “technicality” was in court.

“Garrett then sued York County for requiring him to obtain a special-use permit when his property is zoned for agriculture. Garrett won in circuit court, but when York County appealed to the Virginia Supreme Court, the county won.

“The Supreme Court (of Virginia) basically said cities and counties in Virginia have the right to zone the land in any way they want to,” Garrett said.

Garrett claims that York County officials changed the definition of livestock to exclude shellfish before the hearing, which he believes helped the county win its case in the Supreme Court of Virginia.” ~VA Free Citizen

Basically, the land was zoned agriculture for animals, but they ruled shellfish didn’t apply.

So the county isn’t trying to do anything more before the law takes effect? Even if they did, I think that would be a very clear example of bad faith, which would be shot down quickly.

See my reply to Brian above. They are trying to do more…

I would hope you are right about it being a clear example of bad faith, but it would require Greg to once again spend thousands of dollars to take the county to court over it. This is exactly what these counties do, but they have endless access to taxpayer money to be in courts, but obviously most individuals don’t have the funds to fight government over and over and over again.

This would have been a heck of a lot clearer if you had put this information in the original article instead of your “The Government Is Keeping My People Down” schtick.

Well, the article started off at 1500 words, which was way too long. I was keeping it at the summary level and trying not to delve into too many details. This has been going on for years and is very difficult to summarize in one blog post. Unfortunately, not too many people will take the time with lots of details. I WISH everyone was like you and Brian and wanted the specifics. Voting and activism would look a lot different. This really is not much different than the Boneta case.

I’ve got no problem writing 150 word articles and my readers have no problem reading them.

Okay Bruce. I’m sure ‘all’ your readers would have found this article sufficient. It covered a lot of ground in one post. This issue has been going on in York County for years. It has been written about in local, state and national news sources. It is a legitimate property rights issue. The lower courts and GA have seen it that way. It is straight-up harassment. Glad you want to carp on nonsense. Moving on…

Nah, not me. I just laugh because you edited out the details but was sure to get your photo and your connection to the guy in. Gotta have your priorities, eh?

HB1089 will ensure that aquaculture is legally considered as a type of agriculture in Virginia.

Okay, so this will go into effect on July 1 and the issue here is moot. The county won’t be able to mess with zoning anymore. So do we really need the pitchforks? Looks like Greg won.

No, he didn’t win. They are trying to down-zone him so he is no longer agriculture anymore, to now circumvent the new law. They are trying to do it before the law goes into effect. That is what the Planning Commission is meeting tonight about, which is why people are showing up to protest. It doesn’t just impact Greg, but a number of other agriculture farmers in York County.

I’m still trying to figure out what exactly the County’s concern is here. It’s not clear from your article nor from the news reports. Are they trying to shut down all oyster production (which is out of the jurisdiction anyway) in the County? What’s their rationale for doing this?

There has to be some kind of rational reason as to why they don’t want him doing what he’s doing. I’d just like to know what it is.

See below. Basically, was a special use permit required?

Did they not give him one?

I believe he is operating a commercial business on property not zoned for commercial use. He would need to request a rezoning to permit it, since the special use didn’t work.

It all started with neighbors complaining about the smell of the oysters. It is zoned agriculture (and aquaculture), so obviously a farmer has to be able to harvest their crops and transport them off his property to sale. He doesn’t operate any sort of storefront on the property. Garrett is not the only one being targeted.

What is the County’s reason for wanting to stop his oyster farm?

He is a Republican. York County? Not so much.

If that’s the only reason, that’s ridiculous. There has to be some kind of reasoning as to why they are giving him such a hard time and treating others differently.

Will someone please answer the question. What is objectionable? Is this only about the activity being defined as a commercial operation under the zoning ordinance? If so terribly bad public policy here. But that wouldn’t explain the continued persuit of the guy after the state law was changed. I feel like part of the story has been left out.

If you really want to hurt your enemies, get appointed to the zoning board. It has tremendous rule making authority, and very few checks and balances.

The simplistic answer: the neighbors don’t like oyster farming.

Pretty much, they bought million dollar homes in an upscale boating community that is zoned rural residential and did not think they would be living next to a commercial seafood business. I can’t say I blame them.
Neither of these guys lives on what could even remotely be considered a farm. To be eligible for agriculture land use in York County you must have at least five acres of cropland. Garret only has a couple of acres. Bavuso is on a 1/4 acre lot.