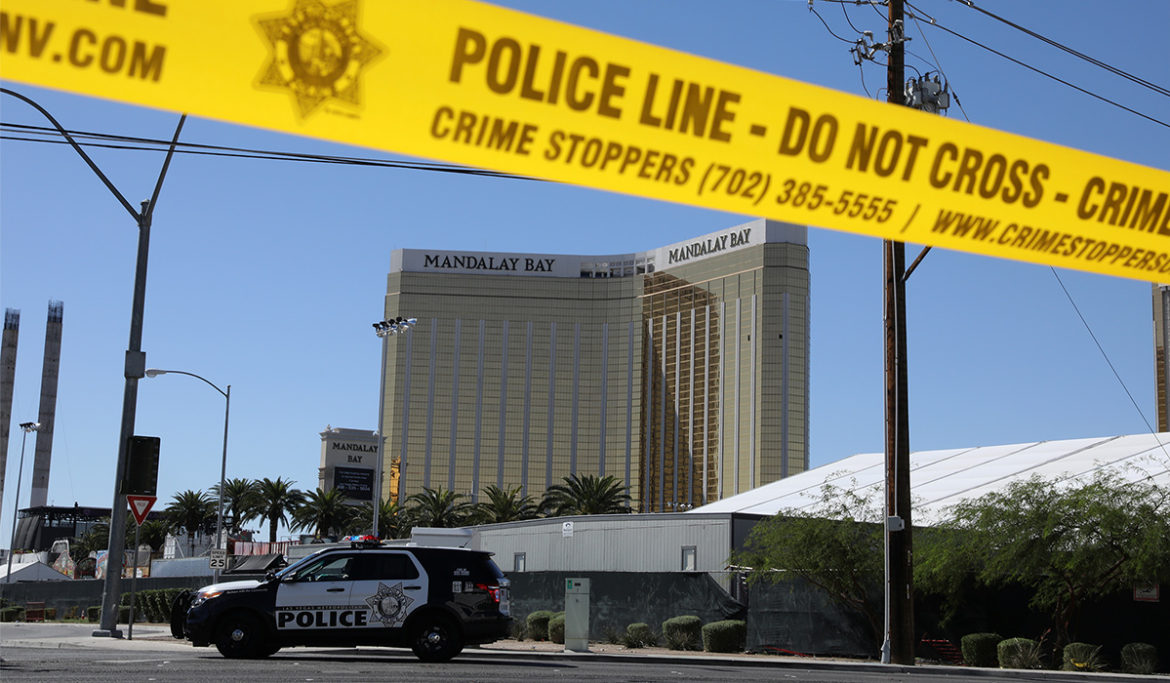 It is a horrifying and heart-tearing time, again. Sunday in Las Vegas a single individual shot and killed nearly sixty precious people, and wounded over 500.

Scores of dead, each of whom had distinct dreams for their own life; connected to so many others whom they loved and who loved them; each a priceless soul with a unique purpose and hope for tomorrow.

One person (based on early accounts) who knew none of his victims, made a decision that took all that away in an instant; and for many of the wounded left them with physical and emotional damage that may last a lifetime.

The culture through the various organs and filters of the media is once again attempting to explain a single incident of mass murder. It is raw and shocking in its scope and suddenness – random and terrifying. What made this man believe that people he didn’t even know deserved to die?

The news beguiles us and captivates us in a way that the murder of one innocent person can’t, or the five people murdered on the streets of Chicago this past weekend alone can’t, or tens of thousands of nameless citizens murdered by their own governments across the planet this past year can’t, or the uncountable thousands dead at the hand of Islamic radicals this year can’t.

If you don’t believe in Evil, then you have to invent reasons.

So we have mobs of psychologists, psychiatrists, sociologists, every manner of professional academic and, of course, grand-standing politicians noodling out loud about “what would drive a man to do this,” as though that can be known through some scientific matrix given enough time.

Yet, inevitably past history shows that as the years pass and we go back and look at the trials and evidence, we never know more about the Hommes’, Haris and Klebold’s, and Lanza’s, and the rest of the mass killers, than we knew the day they fell to Evil, and did its bidding.

Even with the Islamic mass murderers, the Matteen’s, Hasan’s, Farook-Malik’s, while we know whom they claimed to be killing for, in the end it was Evil too that stage managed the events. Just to kill.

It seems that the truth is that if you did understand the motivations of these vicious killers, then you would be as evil as they were. They are unknowable except through the lens of evil.

None of this is new. Every recorded epoch of mankind is violent and ours is no less so. In just the last hundred years, perhaps one hundred million people were killed by their own governments through starvation, firing squads, forced marches, gulags, torture, and hacking to death. Lenin, Stalin, Hitler, Tojo, Mao, Pol Pot, Castro, and the list goes on and on. It was less than twenty five years ago, that Rwanda fell into ethic genocide. In less than four months, 800,000 Rwandans were slaughtered, not with guns, but machetes.

Evil uses whatever implement is convenient. Just to kill.

Theologians and philosophers have been writing about the problem of evil for thousands of years, of course, dissecting its origins, its nature, or even if it exists at all.

For this observer it isn’t really complicated. I didn’t have to look any further than the words of Jesus Christ who confirmed for us that the human family is fallen, and since Cain killed Abel, the pattern is clear. Evil uses human vessels to travel into the history of men, to place them in spiritual slavery, unless they turn to a Righteous God and His ways.

Jesus frequently challenged the religious and legal authorities of his day over the nature of evil that they clung to in their natures. When they wanted to kill Jesus, He explained to them that they didn’t “know” Him, because,

“You belong to your father, the devil, and you want to carry out your father’s desire. He [the devil] was a murderer from the beginning, not holding to the truth, for there is no truth in him. When [the devil] lies he speaks his native language, for he is a liar and the father of lies.” (John 8:44.)

His blunt truth spoken to the Jewish leaders two thousand years ago still ring down through the ages; we live in a binary world. You serve one or the other.

When men forget the Laws etched in the hard stone and mock righteousness, then succeeding generations become increasingly unrestrained because they no longer understand how to read the moral compass of their Designer.

It is interesting to note that in the post Judeo-Christian era that has darkened the West generally and the U.S. increasingly, each tragedy and the ensuing chaos brings not more clarity about the nature of our crisis, but merely ever mounting calls for striping innocent people of their rights and privileges in a free society while ignoring the role of virtue and the education of our young.

We don’t talk about recapturing the righteousness of our founding and our civic compact, or the promises that “it will go well with us” if we return to the Righteous covenant that God provided. Rather for two generations we have ripped every reference to God and the Ten Commandments from our schools and public discourse, as quickly as possible, and the radicals want still more gone. The goal is an amoral population. It can’t go well for us.

Having removed the Truth, we are left only with lies. Then the best among us become capable of the worst about us. And we grow monsters in our midst.

In the first 2 minutes you can hear gunfire from two shooting locations.
Not sure what really happened here but do not believe the MSM or the government…

One of the things that bothers me about these incidents of evil is the “rush to judgment” by authorities who end up excusing and even aiding evil. The recent Mandalay Massacre incident is an example – authorities saying within a few hours of the assault that “there is no connection to terrorism”. It is not possible to know such a thing, and this leads to conspiracy theories that undermine the integrity of said authorities. To avoid being evil, the proper words are “we don’t know, but we intend to find out”.

I cannot emphasize the importance of honesty in the face of evil. In Europe, for example, the “rush to judgment” has so undermined the authorities and governments themselves that the average citizen, rather than believing the initial story, ridicules it.

My bottom line is simple: You combat evil with truth. Governments, political leaders and police authorities who do not do this eventually allow evil to destroy nations. The rise of totalitarianism is based on lies, and evil follows as sure as day follows night.

“… that the average citizen, rather than believing the initial story, ridicules it.”

One of the sad moments in the various UK events has been that after every one of them the UK government’s response has been to go on the news and tell everyone that they are getting their leaders together to discuss what happened. Like .. not going to DO … ANYTHING … but they’re going to get together in the morning after the incident. It’s happened so many times that the people on the news mock the press release statements.

Delay is deadly as well because the average citizen knows it is delay leading to inaction. We actually have a version of what you are talking about, it is called “fake news” from organizations like MSNBC and CNN (only they are mocking themselves and don’t know it).

The Left’s most effective strategy has been their belief in relativism, the idea that everything is relative, that truth only exists in relation to something else, and that there is no objective truth, and no objective good and evil. By attacking not just specific moral ideas, but morality itself, they have turned this into a world where anything can be justified given an effective enough debater. The sky isn’t blue, water isn’t wet, up is down, the Left excels at making the sane, insane. They are iconoclasm taken to its absurd conclusion. Good and evil are among the ruins.

… and to skip ahead to where a moronic Leftist posts their “gotcha” sunset showing that the sky is red, that’s exactly the point I’m making. Statistically, in a cloudless sky, the sky is blue most of the time that the Sun is up, and so it is completely normal that the average person considers the sky “blue”, because that’s what most people experience. The fact that there are exceptions doesn’t disprove the rule. Countless NASA children’s websites go about explaining to the under 10 year old crowd WHY the sky is blue, because basically every human being on the planet knows the damn sky is blue. Except you, of course, because that’s your business, playing “gotcha”, being a smartass, and .. in the words of the OP Mr. Giere above, working for the “father of lies” to cause confusion in the world.

You got it quite right the first time.

1) Was it the left that told us for 7 years that they would repeal Obamacare?
2) Was it the left that told us he (McDonnell) would not raise taxes for transportation in Virginia?
3) What has Trump told the truth about? Didn’t speaker Ryan promise a return to regular order in the House?
4) What hasn’t the Republican Party lied about?
5) About that $20 TRILLION DEFICIT, and the children and grand children…..

1) It is total ignorance for one to believe that either party is any better, or more righteous than the other party. Both party’s sit in Satan’s court.
2) Just look at Washington under Republican control. They cannot fix anything. Absoulutely, totally, 100% dysfuntional liars.

You don’t fix evil. You cannot stop Biblical prophesy. You seem to have a very twisted, unsupported view of the facts, Mr. Giere. The facts are what they are. All these things must come to pass. According to the Bible, we still got a long ways to go, and we ain’t really seen nothing yet.

Is Las Vegas really any different than Sodom and Gomorrah? An evil person does evil in an evil city, and you are shocked?