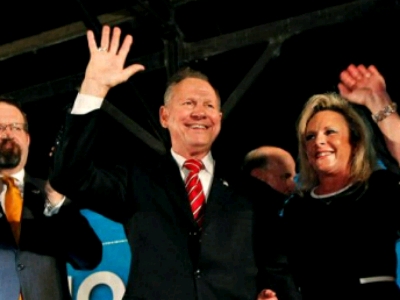 I’m finding it a bit contradictory that many of my “conservative” friends have glossed over eyes for Donald Trump, have vehement rage for Mitch McConnell, and yet shift their blame to many conservatives for Trump’s agenda being stifled. Yet praise be that these conservatives are overjoyed at Roy Moore’s win in Alabama?

The issue is two-fold.

First, President Trump is, unfortunately, placing blame on Republicans who do not vote with the majority. While some establishment Republicans may vote against Trump because, well, he’s Trump, there are some conservatives that vote against these establishment-backed bills because they’re more of a smoke-and-mirror legislation than a sound solution.

Second, conservatives are voting in more conservatives, yet are blaming them when they don’t vote for these establishment-backed bills. Remember, it’s not just what the title of the legislation says, it’s the actual meat of the bill that reveals principled solutions or bureaucratic garbage.

We can either vote in establishment Republicans, in which case you’ll get a half-assed attempt of fulfilling Trump’s agenda, or apply pressure to the establishment Republicans to propose more conservative legislation, and praise our conservative caucuses for standing up for the reasons we put them there. The latter puts us on a path to truly fixing the ails of our nation, while the former means we throw out the entire Tea Party cause to drink more of Mitch’s do-nothing Kool-Aid.

And Mr. President, your enemy is McConnell’s establishment majority, not the conservative minority. Don’t fall for backing the establishment’s candidates because Mitch thinks it’ll make his life easier. He wants you to drink the Kool-Aid of imaginary fixes. If you want to fulfill the voice of the People, then please look to Alabama for validation.

The issue is one-fold – Trump is as Trump does – not sure why YOU ALL are not embarrased to have him as our president. Says more about YOU than US

Establishment vs Conservative is the old paradigm. Today, the dominant party conflict is between Trump populism and the Nevers. We have Conservative Nevers (e.g., Paul, Cruz, etc) as well as Establishment Nevers (e.g. McCain, Graham, Corker, etc), and both these groups are causing gridlock, while they all claim they are upholding Republican principles.

For example, both votes on Obamacare were just attempts to get something into conference where reconciliation could create final legislation for both houses to consider. McCain and Paul each deliberately killed the two attempts at Obamacare repeal for stupid, petty reasons that the electorate will never understand or forgive. They each put up a fig leaf to justify their betrayal, but they haven’t fooled anybody. They just didn’t want the legislation to be considered at all.

Trump broke a lot of eggs in the primaries and continues to attack sacred cows. That bitterness is behind a lot of the gridlock and obstruction we have today. This isn’t a fight about ‘principles’ or ‘good legislation’.

Limbaugh had an interesting take on this last week. He said that the GOP Senators are more afraid of their donors than of the electorate. So if We the People can make the politicians more afraid of us and afraid of not keeping their promises, we should be fine then!

Spot on analysis for which term limits for Congressional leadership (as they apparently already are for Committee leadership) within both political parties remains a necessary cure all for so many of our political ills, or what George Mason even more rightly recognized and referred to in the Virginia Statute of Rights as “maladministration.”