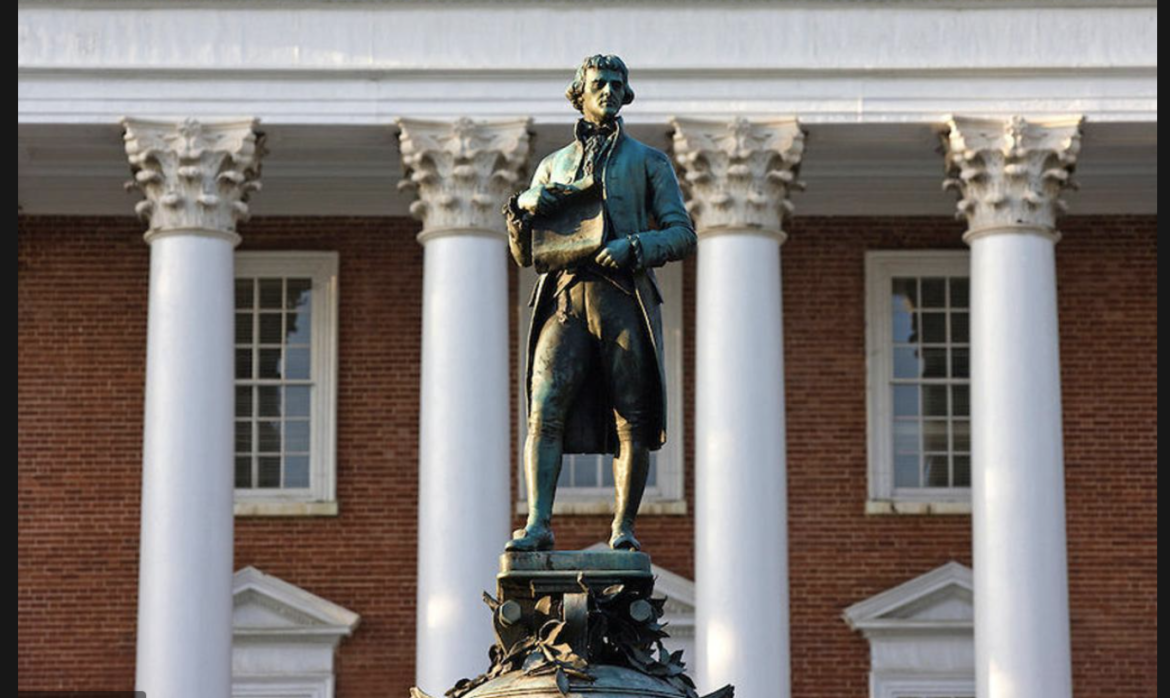 Your Alumni Association Dollars at Work

Sure, you might disagree with the thrust of the ad. Maybe you think, like many people at UVa do, that Jefferson deserves to be remembered in history as a slave-holding rapist. But, really, do you find anything objectionable about the facts, the quotes or the tenor of the presentation?

Now, you might think that the association representing the alumni of the university that Jefferson founded might be willing to publish a paid ad defending his reputation. And you would be wrong.

We’ve reviewed the Jefferson Council’s proposed ad for our summer-fall issue and, unfortunately, must reject it as inconsistent with our advertising standards. As you know, our policy reserves us publisher’s discretion to do so for advertising content that’s potentially “political or contentious, untruthful or misleading,” among other conditions.

You submitted an earlier version of the ad which we would be able to publish, as we would the other ad you’ve run in previous issues of the magazine. Let us know how you would like to proceed.

Council President (and newly appointed member of the UVa Board of Visitors) Bert Ellis appealed the decision to alumni association President Lilly West. Here is her response:

Congratulations on your appointment to the BOV.

Richard consulted me before responding to Tom. As he said, you can edit this ad or we can run the previous version. Let us know what you decide.

Neither West nor Gard provided any advice on what, precisely, needed editing.

Needless to say, Ellis was not amused. He shot back:

This is the Founder of UVA. We are defending him. Obviously you have no desire to do so. What is wrong with you people?

If this ad causes people to think, so be it. We would welcome a full-on debate about Mr. Jefferson.

Bacon’s bottom line: Perhaps that is the problem. Perhaps many people do not welcome a debate, particularly a debate about Jefferson’s oft-asserted liaison with slave Sally Hemings. Perhaps they believe the history is settled. Now, it appears, the act of questioning the received wisdom is deemed “political,” “contentious” or even “untruthful.”

Many alumni would be shocked to know the low esteem with which the university’s founder is held today. Jefferson is commonly referred to as a slave-holding rapist, as if (a) the rapist charge were beyond dispute, and (b) those were the only attributes about him worth remembering. This commonly accepted belief, now widespread in the popular culture, has seeped so deeply into the student body that student guides showing visitors around the grounds sometimes refer to him this way.

In 2000 Jefferson Council member Bob Turner, a UVa law school professor, headed the Turner Commission of more than a dozen senior scholars to examine the historical and literary evidence that Jefferson fathered one or more of Hemings’ children. In the most thorough investigation of the matter ever conducted, panelist conclusions ranged from “serious skepticism” to “almost certainly false.” The report has been largely ignored ever since by ideologues intoxicated with the idea of knocking down a U.S. icon a few pegs.

In a lengthy article in the alumni magazine about Jefferson scholarship, Gard clearly sided with the revisionists who accept the reality of Jefferson’s paternity. In reviewing the historiography of the debate, he never mentioned the Turner Commission report. Referring to the work of Fawn Brodie, the scholar who brought the issue to national attention, he wrote, “Brodie died in 1981, before seeing her work vindicated during the 1990s, chiefly through [Annette] Gordon-Reed’s Hemings research, and then through the 1998 DNA testing of Jefferson’s and Hemings’ direct descendants, which resulted in general acceptance that Thomas had fathered Sally’s children.”

Not only is the case settled, but apparently the findings of Jefferson’s paternity are no longer to be questioned. The new orthodoxy must be enforced.

In one of his most oft-quoted statements, Jefferson wrote in a letter to Lewis Shepherd in 1820, “This institution [the University of Virginia] will be based upon the illimitable freedom of the human mind. For here we are not afraid to follow truth wherever it may lead, nor to tolerate any error so long as reason is left free to combat it.”

Ah, yes, follow truth wherever it may lead… unless that supposed truth portrays the author of that statement as a slave-holding rapist.

What an irony. How far UVa has fallen.

On w related note: The following group is pushing back against “Wokeness” at W&L https://www.facebook.com/TheGeneralsRedoubt

The democrats allowed the statues and symbols of not only the confederacy but the actual American Revolution to be damaged and destroyed. Why is the rejection of the truth surprising when all that counts is political ideology. Wokeness needs to be stopped before it turns America into a land of tyrants.

UVa will be irredeemable without a change in the leadership that paves the way downward for students. This is a great example for why “tenure” must be revoked and eliminated for all faculty. No exceptions.