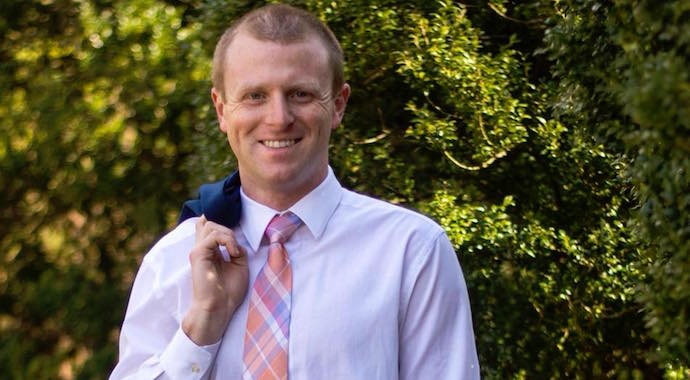 A primary, a convention, and a nomination is a contentious thing. Stakeholders pour their blood, sweat, and tears into ensuring that their man or woman wins. Most of the time, the brains and brawn of a campaign get ignored with all the love and hate poured out through the Pez-Dispenser of ridicule associated with the candidate.  Apparently, when the brain trust becomes too successful, they become the target of our ire.

I’ve had several chance run-ins with Zach Werrell. He worked for Congressman Dave Brat, Congressman Tom Garrett, and Congressional Nominees Ben Cline and Denver Riggleman. He was somewhat inaccurately immortalized in the hit book How To Bag A Rino.

A campaign manger with his capacity for navigating Republican Politics and Primaries isn’t defined by his own genius, but rather by his genius of selection. 90% of winning a campaign is choosing the right candidate. The other 10% is not screwing it up. That other 10% requires more time and effort than most politicos are even capable of employing. That other 10% is a hell of a lot, but it’s meaningless without the right candidate.

I’ve run stores most of my adult life. To create profit, I need the right product. Give me the best products and I’ll make a profit. Politics isn’t that different.

Zach Werrell has been instrumental in helping us find the right candidates. He doesn’t take on pure ideologues or ideological pet-projects. He embraces established and brilliant economics professors and businessmen, as well as successful lawyers and assistant attorneys general.

When I think about his candidates, I wonder what they all had in common – besides a love for Constitution, Country, and Liberty. Honestly, they don’t have that much in common personally. They are as different, as individuals, as any “group” you can imagine – and yet they win.

There is a great deal of strategy and nuance to a campaign and Zach Werrell is a master of minutia. However, campaigns aren’t about the candidates. They are about the voters. If the folks that have come up against Werrell understood this, there might not be so many disgruntled activists in our Commonwealth today.

I’m an Orioles fan. You cannot win with our roster and Buck Showalter is a genius.

When Zach first introduced me to Denver Riggleman, I already trusted his judgement. After I met Denver, I was all in for whatever Denver wanted to run for. How many of you felt the same?

Complaints were on the establishment side, right?

Since getting to know Denver Riggleman – who has disliked him? Outside of the professional/establishment class of corporate fundraisers…. the answer is no one.

Zach Werrell embraces these candidates and helps them win.

I have a lot of friends in the Cynthia Dunbar camp – but now as I watch them try to savage Zach on social media, blaming him for things their own supporters were responsible for, I wonder just how committed to liberty and conservatism they actually are.

Or are they committed to their own paychecks and popularity?

I do not like watching the brain trust behind practically every conservative victory in Virginia getting trashed by conservatives. Zach Werrell wins. For that, apparently, his reputation must be destroyed. Why? Because his victories threaten to put failed consultants out of work?

I’m sorry. That is the truth. There is no other reason why these sour grapes are oozing down the toilet bowls of social media .

If candidates cannot get his support, I ask myself why?

If the paid-activists are angry because he worked for candidates with broader appeal, I have to ask myself if they really care about winning elections, or if they just want to make money.

Before Congressman Dave Brat won – what chance did we think we had?

Now we have a chance with Ben Cline and Denver Riggleman.  Yet – people in our own movement have committed themselves to destroying the professional that helped each of these men to office or to the chance at servicing in office?

These sour grapes are bad for the Republican Party. They are death to the conservative and liberty movements. I know that there are a lot of people that lost a lot of money when their candidate lost. I used to run a mortgage insurance business. When the housing industry went under, I got so mad I got involved in grassroots politics and I haven’t left. I know how awful it feels to lose.

But when has attacking winners been a Republican thing? I thought we valued those who gave us value in return. Zach Werrell has always given us value in return. One day, we may have a constitutionalist and liberty movement built on the back of a Virginia Movement Mr. Werrell helped elect.

I appreciate that, because I care about my liberty and about the kind of representation I receive in Virginia. If you want to win, you only have so many choices. If you want to lose…your choices are endless.

Will Republican Congressional Candidate Denver Riggleman speak on the subject of RINO Ryans
Damnesty?
Before it happens?
Before Friday?

He better or all will lose.
Just can’t sit back and take a sip.

My contacts with Zach have been because of the challenges the Dunbar Raised aginst me and my wife, and other solid Conservative Republican Delegates, lying about us purportedly voting in the democRAT primary in 2013. Zach sent my email on to John Whitbeck, and immediate action was taken by John to counter the phony challenges. Zach also took me in hand and had me lined up with the Credentials Committee in Harrisonburg at the Convention, where I was able to make a strong case against the challenges. So strong that the DFunbar campaign withdrew the challenges to the ACRC Delegates! Thanks for your great work Zach. Everyone of the successful Candidates and now Ben Cline and Denver Riggleman will succeed in being elected with your wise and effective assistance! Bravo, Sir!

Amherst County republican Committee (ACRC). I have been a member since 2005 and am the Precinct Captain for Pl las
t lasteasantview Precinct, 646 Registered Voters in last election, turn out is usually 69% or better for our local elections, and about 80% for major State and National elections. The vote is generally 2.5/1 up to 4/1 in favor of Republican candidates, when challenged!

Sounds like it was a very spurious accusation. Were there others similarly challenged?

Yes, many. A Dunbar-affiliated group emailed (from what we can tell) likely Cline Delegates and told them they were disqualified from voting at the convention. Of course, Dunbar disavowed all knowledge.

The internet (and Rocinante) never forgets.

How could these people and groups get the email lists to do such a thing?

A book on How to Bag a RINO.
I haven’t seen much hunting or any game bagged and tagged since Cantor.
And with a Republican Majority why do will still have an illegal immigration problem nation wide?
Is everyone fine with Virginia ranking in the top ten of the Country for the largest growing problem of illegal immigrants ?
Is there not an illegal alien rebellion?
Or is that just Campaign talk?

Dave Brat is my second favorite Congressman; Tom Garrett is first. I supported Denver in his run for governor and now I support him 100% in his Congressional run. I’m very optimistic Denver can fill Tom’s big shoes and continue to help President Trump #MAGA.

Thank you, Zach, for making it happen!

Great post and a hearty congratulations to Zach Werrell.

Agreed. I’m somewhat tough on SBT but this was outstanding