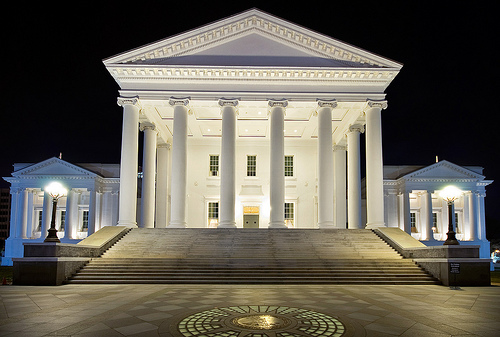 On Thursday the House of Delegates and the Senate passed their budget bills which are miles apart, a half billion dollars chasm.  With two weeks left in the General Assembly session, these two budgets must be reconciled.  It won’t be easy.

The House budget includes Medicaid expansion, the Senate’s does not. Today ALL Democrats in the House voted for the budget and Medicaid expansion. Every. single. one.  On top of that, 20 Republicans voted with them! The final vote on HB29 was 69-31.

We need to praise and thank these 31 Republicans who stayed strong and voted against this budget and against Medicaid expansion:

As for the 20 “Republicans” who voted FOR the House budget and FOR Medicaid expansion, the less said the better.  Very disappointing.

Where do you come up with this stuff? Republicans in DC are busy bankrupting this country. Chief Republican, Teflon Don, is pushing gun control after taking $30 million from the NRA. The Trump FBI seems to be incompetent at anything other than sexting to get laid. The Trump justice dept. indicts Russians who will never see a courtroom.

And, the Democrats are wandering in the wilderness. Who’s in charge?

Those 20 “republicans” are as spineless as a resource officer during a Florida massacre.

Kilgore is worse than spineless.
He gave a green light to the employment of illegal aliens in Va., then he voted for you to pay for the health care of them.
Kilgore must leave Virginia.
If a Democrat held his seat they would have a least voted yes to hb1106 , working toward ending Va’s Shadow Economy and payroll, tax and insurance fraud.
Kilgore is a fraud.

Virginia is a Blue State. Sad to say.

Republicans are making it Blue.

Virginia Repubs (on average) have always been a spineless bunch.

Even during that brief period where VA was a light red/purple state we still ended up with a bunch of weak, flaccid RHINO’s. And now the chickens are coming home to roost.

Name the 20 Rs that need to be removed.

Check the link, they are in the bill passage.

Also check the 20 Delegates current legislation.
Some of these folks are bringing forth facetious legislation.

I will start;
1) Republican Delegate Terry Kilgore must go and I mean out of this State , banished!
This man has voted for this bill to fund Heath Care off of the backs of the working men and women of Southwest Virginia.
This January Kilgore had an opportunity to lead but used the people’s seat to screw them.over even more.
He voted down on hb1106.
By his actions on hb1106 he displayed absolutely no concern for the citizens of Wise, Scott and Lee Counties. The Honorable Delegate uses his freedom to stand with;
Tax evaders, Child support evaders (deadbeat dads), drug dealers.
Why is he not concerned with Millions lost to Va’s General fund through payroll fraud?
Vote for increased public health care for the economically challenged yet allow illegal employment?
Should the Tea Party challenge him for voting to allow illegal employment of illegal aliens in Va or because he supported Medicaid Expansion?
Heck your choice.
Terry Kilgore is not a geninue Virginian.
If Lee, Scott and Wise County want a Democrat they should a least vote for one that does not undermine their jobs and allows for the investegation and prosecution of Santuary Employment.
Yes Kilgore be voting NO on hb1106 has provided Santurary of MS-13.
Don’t worry Southwest Va the illegal aliens will be smuggling in more meth.
Please contact these people and tell the Kilgore must go if he supports payroll and tax fraud.
1)Scott County Dem. Chair Julie Hensley
2) Wise County Doug Mullins
3) Lee County Joshua Ely
I purposely did not post their contact info but they are accessible.

Hey Terry how many illegal aliens can I employ under a single 1099?
And in Va I don’t file copies of the 1099 with the Department of Taxation.
Tell the working men in Southwest Va you prefer illegal aliens, you did by voting no.

Yes, Goverment is the problem,
The Va House District1 Representative.
The only thing worse than a illegal alien taking alien Virginian job is the one that provides it.
Just some simple thoughts from a genuine Virginian.

Davis voted to make you ,I and others pay more tax to fund Medicaid Insurance for which we know will cover illegal immigrants.
Then Davis has a current bill in our General Assembly hb969. The Davis bill seeks to make Contractors not responsible for worker’s compensation premiums girl the uninsured subcontractor he hires. Any *credible contractor* will have obtained a copy of their Subcontractors Certificate of Insurance prior to work be commenced.
I am a Builder/Contractor,
if I do not exhibit my *personal responsibility required* by my insurance company they charge me.
It is not the Va Goverments responsiblity to provide an abatement of insurance premiums of a Contractor who is irresponsible in his obligations or his desire not to abide by a signed contract with his insurers.

Flaccid like toilet paper.
I feel sorry for their wives.

I believe Corey Stewart made comments in similar nature about these Republicans.
Does anyone know if illegal immigrants and or DACA adults and children are covered in this bill?

There will probably be some language to weed them out, but it will be easy for anyone with half a brain to just cheat on the application.

We know it will be so. We have sllowed them to benefit off of Va for way to long and with no tax obligations.
Yes, Goverment is the problem.