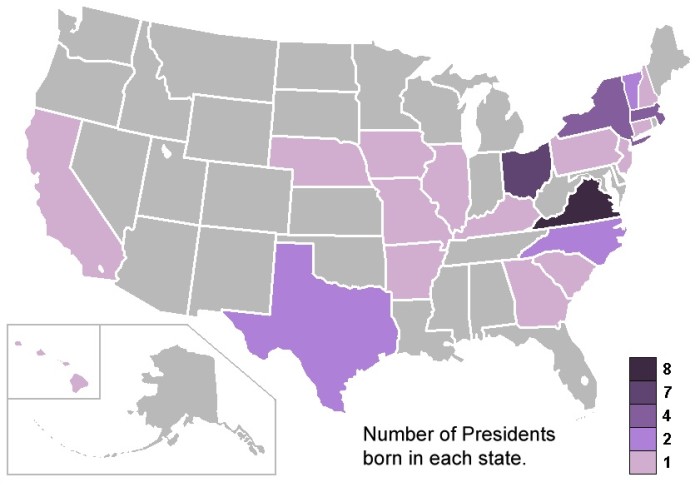 20 Reasons why we are proud to be Virginians

There are so many reasons why we are proud to live in the greatest state in the nations.  These are a few:

Virginia is the birthplace of Presidents. We have more Presidents born in Virginia, 8, than any other state. Seven of the 8 are buried in Virginia.  Those 8 Presidents are: George Washington, Thomas Jefferson, James Madison, James Monroe, William Henry Harrison, John Tyler, Zachary Taylor and Woodrow Wilson.

The birthplace of country music is Virginia. The famous Carter family came from Hiltons Virginia, close to Bristol, and made their first recordings in Bristol.

Dr. Walter Reed from Gloucester County discovered the cause of Yellow Fever in 1901, saving millions of lives.

Two wars were settled in Virginia. The Revolutionary War ended in Yorktown in 1781 and the Civil War ended at Appomattox courthouse in 1865.

We have the second oldest college in the country, William and Mary, founded in 1693. Since then Virginia has added 80 colleges and universities, about half private and half public.

Virginia values the military. We are the home of Arlington Cemetery and the Pentagon.

We have beautiful mountains and beautiful beaches.

Virginia has more Bald Eagle nests than any other state, along the James River and on the Potomac River.

See all 20 reasons why we love Virginia here.

20 Reasons why we are proud to be Virginians was last modified: May 13th, 2017 by Jeanine Martin

Highly educated, love our illegal-
Off the books labor. Drive luxury cars to sit in Best buy for 6 hours on Black Friday to save 50 bucks
CANT do roads or TRAFFIC
FORGET ABOUT FENDER BENDERS.
SHALL I CONTINUE?

Parts of Ohio were once in Virginia. Perhaps that causes part of the confusion.

Btw, a comment on the article you refer to claims that Ohio also birthed 8 Presidents.

No, there were not 8 presidents born in Ohio, but Ohio likes to claim that 8 presidents were “from” Ohio. They include William Henry Harrison in their count, who was actually born in Virginia, but was living in Ohio when he was elected. There is no disputing that Virginia “birthed” 8 Presidents, more than any other state.

I’ve been a native Virginian for 8 years now 🙂

I wasn’t born in Virginia but I got here as quickly as I could!

William and Mary college! Both great!