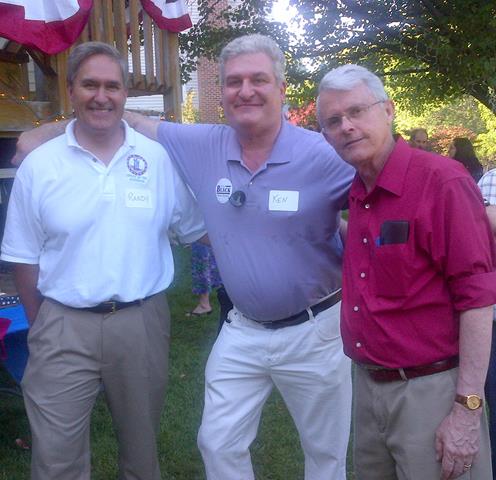 Randy Minchew, Ken Reid, and Dick Black at one of Black's famous picnics

A tribute to the Hon. Richard “Dick” Black

A number of great Republicans lost their seats Nov. 5 in the 7th “blue wave” Virginia has seen since 2012, but the retirement of Sen. Richard “Dick” Black, who served in the Virginia State Senate from 2012 to just a week or so ago, and in the Virginia House of Delegates from 1998 to 2006, is what I wish to write about today.

His 13th District seat is now represented by a partisan hack Democrat, who defeated another great Republican, Geary Higgins (with whom I served on the Loudoun Board of Supervisors).  So now, the only remaining Republicans in Northern Virginia are State Sen. Jill Vogel and Del. Dave Larock, each of whom represent Western Loudoun County.

I actually first met Dick Black in 2001 at a meeting of a joint task force of Virginia and Maryland General Assembly members on regional transportation.  I lived in Montgomery County, MD, at the time, and led a group of Marylanders who wanted a new Potomac River crossing to Virginia. I was impressed with his understanding of the need for a new bridge and he was a refreshing contrast to the Maryland representatives, who were largely liberal and afraid to go against environmental extremists who detested new highways.

It was that extremism, coupled with the Clinton-Lewinsky scandal, which pushed me to become a Republican.

And then, 9-11 happened, and I embraced conservatism, patriotism and God even more.

It was a natural move for our young family, with five-year-old twins, to get out of Maryland and move to Loudoun County, where we were welcomed by a bevy of conservative activists, notably, the property rights movement.

Dick Black was the opposite of liberal Maryland politicians I had to deal with. Marine colonel, Purple Heart recipient (Vietnam), pro-life, pro-2nd amendment, pro-transportation (i.e. he got a dangerous accident-prone Route 28 upgraded to an expressway), pro-traditional marriage, observant Roman Catholic.  I was becoming an observant Jew.

In other words, he was all American. It was almost cleansing to be around him and his circle of supporters.

I was well aware of the controversy and angst Black could cause in his campaigns – not just among Democrats, but also Republicans, leading some to begin a “Blackout” effort to get him out of office.

In 2005, our family helped Dick in a tough re-election campaign for his House seat in Eastern Loudoun. We arrived at his home, then in Sterling, with my daughter Lara, who drew a cartoon for him. My son and I went canvasing for him.   I wanted my kids, then only eight, to be exposed to a hero like this.

He lost that race and liberals chortled, thinking he was out for good. Until 2011, when he threw his hat in the ring for the newly created 13th District, which led him and his wife, Barbara, to move just outside Leesburg.  He defeated two tough challengers in his primary and went on to win the November election.  Despite Terry McAuliffe putting $500,000 in the race to defeat him in 2015, Dick was re-elected!

I was elected to the Board of Supervisors in 2011, and my friend, Randy Minchew, won a seat in the newly created 10th District in the House.  So, now, we were all in office – together.

Black got laws passed to enable an eyesore of a building to be taken down in a Leesburg neighborhood; requirements for doctors to disclose the limits of Lyme disease tests, and allowing Sunday hunting to keep the deer tick population down; and we three fought against the inside –the-Beltway liberals at the Northern Virginia Transportation Commission, which wanted just more money for Metro without accountability.

We had our policy disagreements – notably, his support for Assad in Syria, his opposition to the 2013 transportation funding bill and the Bicounty Parkway – a road that is supposed to connect Loudoun with Prince William County.

But it was hard to disagree with Dick Black and be disagreeable because he was never disagreeable or nasty.  An attorney by profession, he could back up his case cogently, rationally and with facts. He was unfazed by people who hated him.  As a Vietnam veteran, he could handle anything thrown at him.

In addition, he had a huge following among GOP activists in Loudoun and other parts of the state, as former Supervisor Ron Meyer fatefully found out when he tried and failed to win the GOP nomination for Dick’s seat.

Dick’s annual backyard picnic, where he expected no entrance fee, was something to look forward to.  Hundreds attended.

This missive may read a lot like an obituary. I can assure you, Dick Black is very much alive.  But his departure from the State Senate is a turning point for Loudoun County, where I no longer reside.

This county is still wonderful, prosperous and diverse.  But I lament some changes.

In the post-911 Loudoun, high schoolers would decorate their schools in red white and blue and the School Board would name new schools after American values – Freedom High School, Heritage High School, Independence, and so on.

Today, they give high schoolers time off to protest against guns and allow pornographic books in school libraries in the name of LGBTQ “diversity”.  School teachers are in trouble with the law increasingly.

Other than Del. Dave Larock, there is no champion for parents who want clean school plays and books, no champion for religious folks who want their kids to grow up in a G-rated world, or to ensure the right to bear arms in their churches (or my synagogue).   That bill was Dick’s but it died in the House last year.

Republicans who did manage to survive Nov. 5, 2019, hang on by a thread.  The growing liberal electorate seems to care nothing about the caliber of who represents them, or their results, as long as there is a “D” next to their name on the ballot.

I believe Dick Black will stay involved, but I doubt neither he nor any candidate like him could get elected in Northern Virginia again.

It was an honor and privilege to work with him all these years.  Thank you for your great service to your country, Virginia and your friendship.