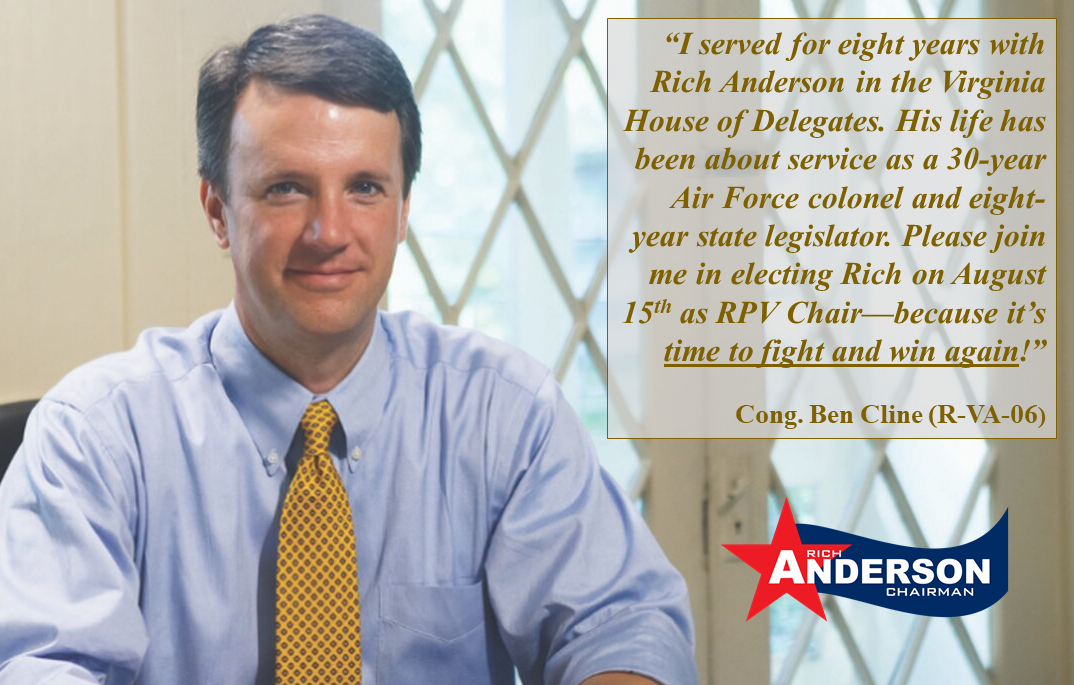 After a busy week of Zoom meetings, email exchanges, and phone calls with Republicans from one end of Virginia to the other, it’s clear that our Republican brothers and sisters are ready for two things:

That’s why I’m proud that Congressman Ben Cline (R-VA-06)—like Congressman Rob Wittman (R-VA-01)—has endorsed me in this fight to rejuvenate and reenergize our dysfunctional RPV organization in Richmond. August 15th is coming and with it the election of a new RPV Chair—the defining moment when the turnaround of our state party begins and we renew our vow that Virginia Republicans will once again FIGHT AND WIN.

Congressman Ben Cline has served Virginia’s 6th Congressional District and our country with great distinction since his election in 2018. Before that, Ben and I served together for eight years in the Virginia House of Delegates. As Constitutional conservatives, Ben and I:

I’m proud to say that Ben has given me his unequivocal endorsement and his unconditional support in my campaign to serve as RPV Chair. And while I value the support of faithful public servants like Congressman Cline, I am most heartened by the support I’ve received from grassroots Republicans across Virginia. That’s why I am totally committed to transforming RPV into a unifying force with a focus on serving and supporting our 126 local Republican units as never before.

Thank you to Congressman Cline for his endorsement and trust, and thanks to all of you who believe in the promise—and the premise—that RPV can again be the defining force that propels Republicans to victory across our Commonwealth.

I must first be reachable if I am to be responsive. Please don’t hesitate to connect with me between now and the RPV State Convention on August 15th—and beyond—in these ways: