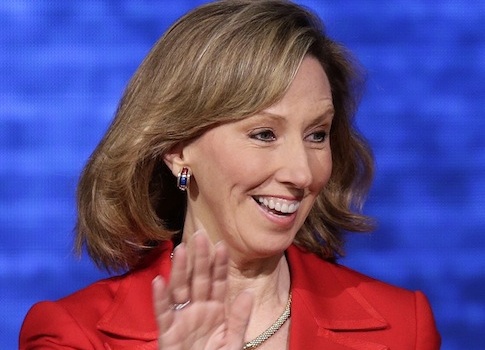 â€œMarco Rubio represents a strong, new generation of leadership,â€ Comstock said in a statement Wednesday. She added that he â€œunderstands firsthand the struggles facing middle-class familiesâ€ as well as â€œthe complex national security challenges we face.â€

As we reported earlier, Rubio has done very well with endorsements in Virginia.Â  He has made an effort to court Romney supporters in the Commonwealth. Â Comstock lead Romney’s campaign in Virginia in 2012.

More details of the endorsementÂ here.Â

[…] two Virginia Republican Congressmen voted for terrible Omnibus bill, Scott Rigell, and Barbara Comstock, both of whom have endorsed Marco Rubio for President. Conclude what you will. Â We have previously […]

Barbara continues her string of ‘Win The Future’ endorsements. I am so glad the 10th district GOP board gave her the primary ‘immunity cloak’ ahead of her liberty-minded votes and favored candidates.

Be sure to thank Jo Thoburn the next time you see her. She too went back on her word. That seems to be rampant in the 10th district. Conservatives get elected promising to support conventions and then turn their back on conventions when politicians ask them to. It makes it impossible to trust their words. We must always look to their actions.

Jo is the Chairman, she would only get to vote if there was a tie but you are absolutely right about politicians turning their backs on conventions and picking primaries. 58

That’s exactly what Jo Thoburn did! She broke the tie by voting for a lifetime primary for Comstock and for that Barbara will reward Jo by requiring that Jo remain chair for another 2 years. Lucky Jo!

That’s the reward? Who else voted how?

I was being facetious, it’s not a reward, but Barbara is insisting on it. Yes, others voted for a primary but they were not elected chair with the promise to always support party run processes. Jo failed to live up to her promise.

My guess is that the promise was to support party processes for state, so there was probably an implied yet not explicit clause for the 10th. (It’s not like the rest of the state nor politicians had the gift that the 10th board gave away.)

On the other hand, it’s the primary job of the District chair to hold or get a Republican congressman in their district. Jo did her job.

Rubio is a puppet for Fanjul Brothers control on the Sugar industry. He keeps their subsidies rolling in..

Wonder if Babs will sign the next Gang of 8 Bill that Marco serves up to her?