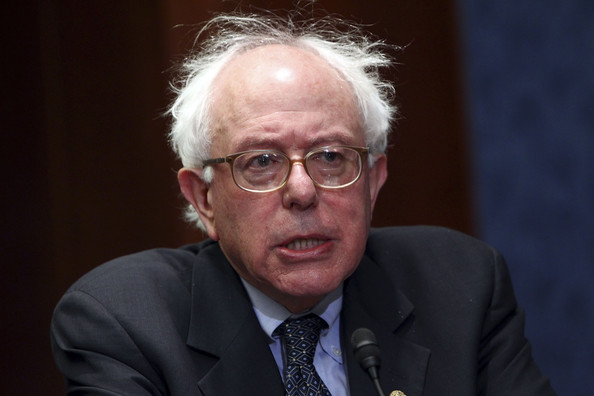 On Monday morning Democratic candidate for President Bernie Sanders appeared at Liberty University before a polite crowd of 12,000 students. He used the bible to tell the students that we need to fix income inequality and poverty.  Sanders is the first Democrat candidate to reach out to evangelicals.  Few minds were changed by Sanders visit to the campus.  While Sanders thinks the government is always the answer to helping people, students at Liberty disagreed, but always in a polite and respectful way.

Later on Monday, 2,000 people turned out in Manassas to ‘feel the Bern’. He called for a minimum wage of $15 an hour, more paid family leave for new mothers, and free tuition at public colleges and universities.

He got a big response when he said,

“It’s not a radical, left-wing idea to say if a person works 40 hours a week, that person should not live in poverty,”

Sanders also called for medicare for everyone under a single payer system, and he talked about the threat of Global warming.

In other words, Bernie Sanders covered everything we would expect him to cover, saying the things we would expect him to say.  His visit to Virginia would not be a cause for interest or concern if he were not continuing to rise in the polls, making him a serious candidate and one we need to pay attention to.  It’s almost unbelievable but we could be facing a choice between Bernie Sanders and Donald Trump.

More on Sanders at Liberty University here and here.  More on his visit to Manassas here.

Prior to Sanders’ visit, the Chair of the Prince William County Democratic Committee Harry Wiggins essentially wrote off the visit as down played it as a side-show, claiming that most Democrats are more interested in the upcoming Virginia elections right now.

I have to tell you, Jeanine, as a former socialist New Yawk Jew myself (before the age of 25, however), I cringe every time I hear progressives claim that the teachings of Jesus were socialist. How wrong could they be!

The original teaching of Christianity as presented in the New Testament is about how to live in what Jesus called the kingdom of heaven. It is about the individual soul’s relation with God through Christ. It is not about the political organization of society, because even though he lived in a very politically turbulent world, Jesus did not talk about politics at all. The New Testament simply assumes the existence of political society and goes on from there. Because Christianity is not, like orthodox Judaism and Islam, a complete recipe for this-worldly existence. Christians must “render unto Caesar,” i.e., render unto a non-Christian basis of authority.