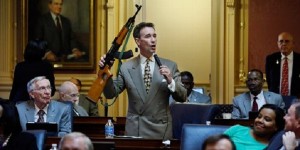 Every once in a while, a story breaks that brings together all the elements of a problem, and crystallizes the arguments, for BOTH sides of a controversial issue.  Such is the case with young Elliott Rodger, who went on a killing spree in California that resulted in the deaths of seven people, including himself, and the wounding of 13 others.

The Columbine tragedy 15 years ago, and then the Sandy Hook shootings two years ago provided a strong impetus for opponents of the second amendment, or those who believe in ever-tighter gun restrictions.  At the same time, one of the famous sayings of second amendment advocates is that…guns don’t kill people…people kill people.

Well, in this case, a gun WAS used for some of the killings, but it was just one of three weapons used in the murderous turn of events.  Before using a gun to finish off an insane killing spree that he warned of in a video, Rodger used a knife – possibly a machete and a hammer – and his car to kill three of his victims and mow down a number of others.

One of the victims’ father held a press conference and actually blamed the National Rifle Association.

Well, Santa Barbara county, where this tragedy occurred, has on the books among the restrictive gun laws in the nation…so it’s hard to imagine that even stricter laws would have prevented Rodger from finding a gun.  It turns out he had legally purchased three guns in different cities….which drives home the point – again – that those who intend to commit a crime will find a way to find a gun and will hardly be deterred, in fact will ignore, gun laws….while tight restrictions on gun ownership will make it much harder for law-abiding citizens, those the second amendment is designed to protect, to defend themselves against psychotic criminals like Rodger.

There is an understandable urge, particularly among those who don’t pay much attention to public policy, to say we need to…do something…in response to the disturbing increase in these kind of tragedies.  But as another saying goes, If guns are outlawed, only outlaws will have guns.  One need only look at the rampant gun violence in so many cities with strict gun control laws to see the truth in that statement.

Certainly, all kinds of red flags should have been raised at the increasingly disturbed and erratic behavior of this guy, and the obvious warning signs we can now see in retrospect.  But at the same time we as a nation are finally coming to grips with increasingly rampant and severe mental illness, the climate has become less and less favorable for isolating and detaining such people.  We as a society have chosen to err on the side of not forcing people such as Rodger into institutions or inpatient care, and we’ve paid a steep price.

We can’t always anticipate tragedies like this, but when we DO see warning signs of clear and present danger, we can and must have the will to stop people like this in their tracks.  And it won’t help…in fact, will hurt…if we insist on blaming the weapon instead of the person who decides to use it.

Tim: overall good piece, but you’re incorrect about there being a “disturbing increase in these types of tragedies”. We’re actually in a period of decline for these types of incidents…..which makes the wailing for more gun control even more intellectually dishonest.

In the Boston bombing tragedy, we didn’t blame the bomb!.. In a tragic DUI fatality, we don’t blame the booze!.. But let a gun be involved it’s the tool that’s laid to blame.