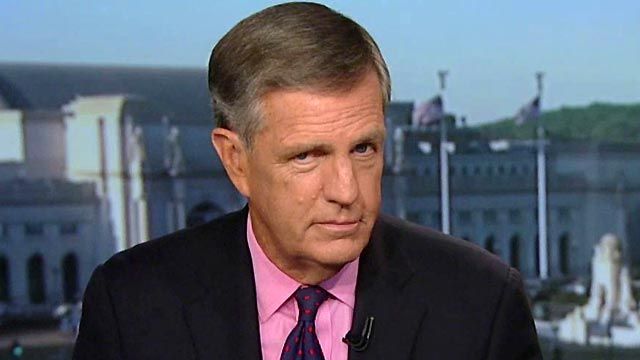 Virginia’s own, Brit Hume,will be returning to Fox News for the rest of the election season. He will be taking over the 7:00 news slot being vacated by Greta Van Susteren. She is leaving in the middle of an election season after 14 years with the network. Strange.

Yes, I have left the Fox News Channel.
On Thursday night, I made my decision and informed Fox News of my decision that I was leaving Fox News Channel per my contract.
Fox has not felt like home to me for a few years and I took advantage of the clause in my contract which allows me to leave now. The clause had a time limitation, meaning I could not wait.

I love my staff, I love my colleagues, and I love the crews. That is the hardest part of this decision as they are wonderful people.

And most of all? I love the viewers — even the ones who have gotten mad at me over the years and taken swipes. 🙂

I hope to continue my career in broadcasting.

Will the liberal Van Susteren land at CNN or MSNBC and does anyone care?
Brit Hume’s response to his latest assignment on Fox News,

“(He is) happy to take on this assignment for the balance of this extraordinary election. My Fox News colleagues have set a high standard for political coverage which I’ll do my best to uphold. I’m honored to be asked.”

Brit Hume, of Hume Virginia, (his family’s ancestral home), has long been involved in election politics. For many years he had his own political program at Fox News, “Special Report with Brit Hume”. It was the best political show on television. Hume has covered politics throughout his career, in newspapers and television. His first Presidential assignment was covering Walter Mondale in 1984, following that with the George H.W. Bush campaign. Now Brit will follow Brett on Fox News.

Brit Hume attended St. Albans School in DC at the same time Al Gore attended the school. Hume went on to graduate from UVA with Fred Barnes of the Weekly Standard. For a time on Hume’s television show, Barnes was one of his political commenters. Both frequently sported UVA ties.

Will miss Greta’s common sense approach to news.
Never saw her as a liberal, Jeannine.

Brit Hume is excellent. Glad he will be on regularly.

A friend who works for Fox told me Greta is a Democrat and rather liberal. It’s very good if it doesn’t come through in her broadcasts.

I remember her short time at another network (CNN?) before she went to FoxNews. In that show many years ago, she was quite openly liberal. However, she did try to play straight down the middle at Fox News. Since I never saw her express an outright conservative point of view on Fox News even when she had ample opportunity to do so, I always thought she was restraining herself to appear neutral. I suspect she’ll show up with an unambiguous liberal viewpoint wherever she goes next.

Yes, I believe she was with CNN during Clinton’s scandal and his impeachment.

Megyn’s stepping stone to the top.

Be very wary of FOX News. Murdoch’s sons want to make the network more like Europe’s Sky News…shifting towards the Left. Murdoch is an open-borders globalist and has been deceptively working to undermine Trump.

I know what you’re saying, but I don’t get what you mean.

Yes,it’s likely Brit Hume is a Republican, but I’m pretty sure no one has trained him to do anything.

So, a Trump apologist and Ailes defender, Van Sustern, is replaced with Hume who is a severe Trump sceptic.

Going to work for Trump would be funny.