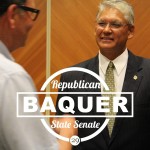 Since 1975 democrat Chuck Colgan has represented Virginia’s State Senate district 29.Â  Â At 87 years old, after 10 terms in office, Â Colgan has decided to retire and not run for re-election in 2015. Â  Bryan Â Baquer, a first generation Polish-Filipino American, has announced his intention to run for the seat.[read_more]

Baquer graduated from the Naval Academy and served for 10 years. Â He is now a financial adviser, married with children. Â On Monday at the Prince William County Republican Committee he said,

I am running for State Senate because I believe in the American Dream, an American Dream I have witnessed and lived, still exists â€“ and it IS available, accessible, and achievable for everyone.

Itâ€™s time to raise our standards and expectations, not only for ourselves, but also for our children and our grandchildren â€“ because theyâ€™re our future. We have a responsibility to prepare the next generation for the immense challenges ahead â€“ and that starts with education.

Beyond education, we have an obligation to restore opportunity â€“ for ourselves and future generations â€“ by getting the government out of the way. Only then can we free ourselves from the burdens, limitations, and constraints our state government puts on all of us.I am running for State Senate because I believe in the American Dream, an American Dream I have witnessed and lived, still exists â€“ and it IS available, accessible, and achievable for everyone.

These are the reasons Iâ€™m running for State Senate and hope to have your support next year â€“ but itâ€™s also why we must do whatever it takes to help Ed Gillespie, Barbara Comstock, Suzanne Scholte, and Rob Wittman win their elections this year. I sincerely hope you will join me in knocking doors, making phone calls, and raising much needed funds to help them succeed.

Thank you so much for your time and God bless.”

sounds like a good man. Just wish he would add Dave Brat to his list…the 7th needs all the help it can get. We voted Cantor out now we NEED to make sure the seat stays Republican.