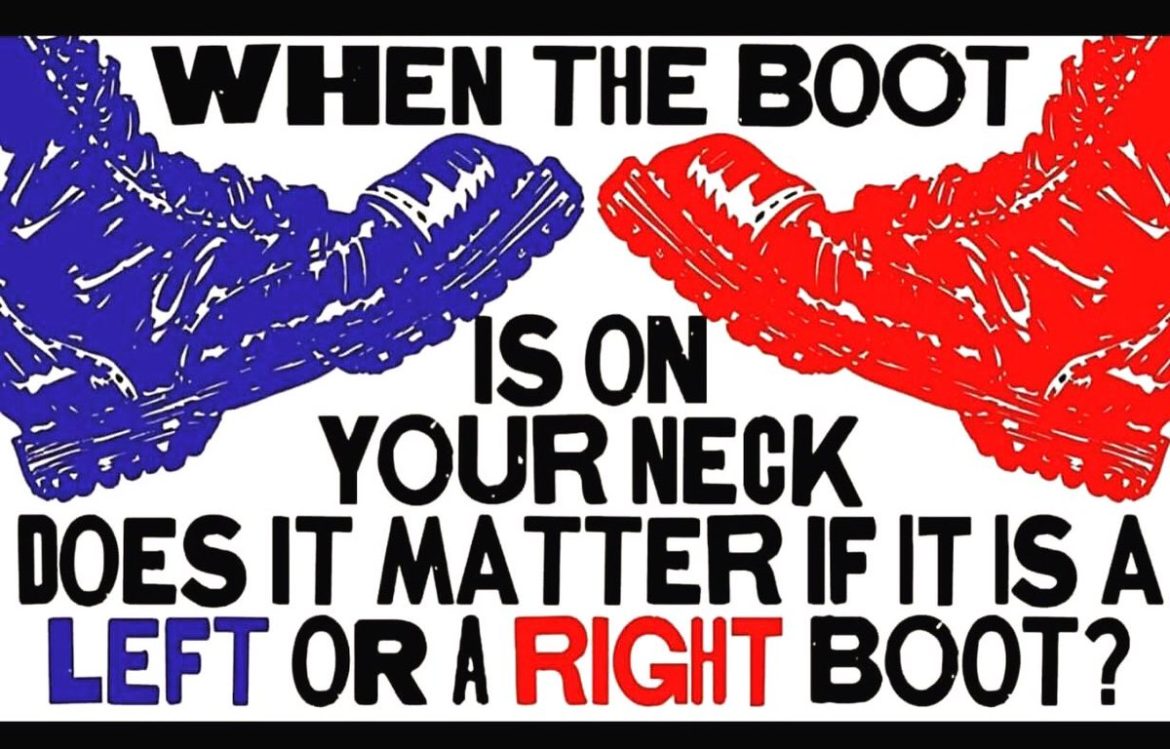 Can you hear me now?

The old saying goes, those who understand history are doomed to watch others repeat it.  And today we are faced with the entire collapse of the Republic and These United States, because to be frank, Republicans have not been listening.

In my 17 plus years of political activism, I have found myself, as a constitutional conservative, fighting more against the Republican Establishment than the far-left radicals.

Because the â€˜establishmentâ€™ was duped by Bill Clinton in the 1990â€™s into thinking they can get what they want from big government just like the Democrats.

And these same establishment Republicans have created the monster that is about to destroy us.

Let me give you a few examples, and then see if you finally understand.

Schools, Terrorists and the Patriot Act– The big fight recently across Virginia and the Republic has been over the size and control government has over the education of our children.Â  Republicans lined up behind George W. Bush when he passed No Child Left Behind.Â  And then naturally this morphed into Race to the Top and then Common Core, which sadly many establishment Republicans like Jeb Bush, McCain and others have supported. And now many are distracted fighting over recalls and â€˜whoâ€™ has the power over education, rather than arguing that power should not exist.Â  And it gets worse.Â  In 2001 I was opposed to the â€˜Patriot Actâ€™, which if properly named, would be the â€˜Repeal of the Bill of Rights Actâ€™.Â  But the Biden Administration is weaponizing the Patriot Act against parents who are taking on these out-of-control School Boards who are using the very power that establishment Republicans gave them.

The National Defense Authorization Act, Gun Confiscation and Indefinite Detention– In 2012 many constitutionalists were arguing against the unconstitutional clauses slammed into the NDAA by the establishment and demanded a clean military spending bill.Â  The vast majority of Republicans attacked us, claiming we did not support the military, all while Lindsey Graham and John McCain were yelling on the floor of the United States Senate that when Americans â€˜ask for an attorney, tell them they do not get one.â€™Â  But now that indefinite detention clause is being used against fellow Americans from the January 6th DC protest, who are rotting in Federal Prison with no due process and no attorneys.Â  Even worse, just last week, 135 establishment Republicans in Congress, like Virginian Rob Wittman and Texan Dan Crenshaw, voted for the NDAA with Red Flag Gun Confiscation stuffed in it.Â  This gives the military the power to not only kick in your door and take your guns without your day in court, but also to allow them to detain you on the whim of a government bureaucrat, without your right to due process and your day in court.

War on Drugs and Forced Vaccination– Back in 2011 many of us were arguing that the so called â€˜War on Drugsâ€™ was the biggest violation of civil liberties and medical freedom ever.  Not that I have ever done drugs (I hate even pain killers and OTC federally approved dope) nor do I ever want anyone to use them, but rather our argument was if the government can tell you what you can put in your body, the flip side is they can demand you put whatever they want into it.  Look at where we are now.  Joe Biden is using that very power to force you to take an injection that is not even a real vaccine.  But we were laughed at as â€˜hippiesâ€™ all while police departments were issued bayonets and tanks to help control what â€˜free â€˜ people put in their bodies.  How is that going to work out?  Just take a look at Australia and get back to me.

Afghanistan, Congress and the Power to Declare War– The unspoken bipartisan agreement on never ending war, and the unconstitutional presidential power to initiate war has led to the debacle in Afghanistan.  From 2007 on, many constitutional conservatives demanded a return to a constitutional foreign policy, where in Article 1, Section 8, only the Congress has the power to initiate conflict.  But most war loving Republicans and neo-conservative Democrats fought us tooth and nail.  All while Trillions are spent overseas and our boys and girls killed, without even a vote by their congressional representatives as the Constitution requires.  Then Joe Biden gets that unconstitutional power, and pulls the biggest military debacle in our history, bailing on Afghanistan and leaving billions of weapons behind to terrorists that our deep state has trained on how to use them.  Now these radicals are trained and armed, all without one single congressional and constitutional vote to even have been there in the first place.

Inflation, Prices and the Federal Reserve– Fact- most of government spending is not taxed from the people, but rather printed out of thin air.  Like every bailout from George W. Bush till today. As we all watch the prices of everything go up, will you realize that in fact it is the dollar going down?  This is due to the actions of a fiat, fractional currency system that most of you have paid zero attention to.  The Constitution specifically states that only gold and silver can be used as currency, but in 1913 Woodrow Wilson and the big banksters got together and started the Federal Reserve.  Now as yet another bailout is planned, due to the â€˜feardemicâ€™, the printing presses are warming up to inject yet more fake money into the economy which will create hyperinflation, destroy the middle class and usher in socialism.  Even mainstream Republicans call us crazy when we demand a return to sound money, based on real market value.  The bonds of slavery are truly forged with paper chains, as the time and labor you dedicate to acquire property is manipulated the worldâ€™s largest banking cartel.  With the support of both the establishment Republicans and Democrats, because that is how they stuff their campaign coffers from donors who benefit from it, while the rest of us struggle to put food on the table.  And it is going to get worse.

The 10th Amendment, Taxes and Tyranny- This fake monetary system has led to the income tax, as it is only your labor that creates any value to the Federal Reserve Note, aka the Dollar, and this has then led to the total destruction of the 10th Amendment.  States line up like little piggies at the trough, to beg for Federal Dollars to grow government, and at the same time cutting a deal with the â€˜devilâ€™ to implement Federal directives, the vast majority never being voted on by Congress.  What is even more ironic, is that these â€˜Federal dollarsâ€™ they sell their soul over are taxed from their own citizens to begin with.  But yet, when we advocate for the elimination of the income tax, establishment Republicans attack us for being radical.  Do they consider James Madison, Thomas Jefferson and many of our Founding Fathers also that out of touch?  Because the Constitution they created forbid direct Federal individual taxation. And now your very labor is funding the beast that is destroying everything the soldier of 1776 fought and died for.

I could go on and on but let me step aside and allow a few words from our Founding Fathers.

â€œArmies, Debts and Taxes are the greatest danger to libertyâ€- James Madison

â€œGovernment is like fire, a dangerous servant and a fearful masterâ€- George Washington

â€œCitizens are not to inquire how your trade may be increased, nor how you are to become a great and powerful people, but how your liberties can be secured; and liberty ought to be the direct end of your governmentâ€- Patrick Henry

For far too long the establishment Republicans have duped the people into believing they too can get what they want out of a large and powerful government.  And now that government is about to eat us all.

And a recent study by the University of Virginia shows a majority of Americans now support secession and splitting our Country into several pieces.  I donâ€™t blame them.  I do however blame those who have supported and created the unconstitutional Central Government (it is far from Federal) that has led to this point.

As Ben Franklin walked out of the Constitutional Convention, he was asked what type of government was created.  He simply stated, â€œa republic, if you can keep it.â€

And we have failed to keep it.  In our era of team sports politics, many good patriots have been duped by talking heads and politicians, and this has led us to the sorry state we are in today.  In 2008 and 2012, those of us who supported the Republic and the Constitution were mocked by the Establishment for supporting the Ron Paul Campaign.  But everything Ron said is coming true right now.  And I weep for America.

It is not too late.  We the People can pull off the blinders and finally see what is really going on.  It will take guts; it will take dedication and it will take withstanding the barbs from the establishment of both political parties.

But unless we use the brilliant political system our Founders created, and launch a true political revolution, our Republic, America and Liberty are dead.

I have often said if you are waiting on a politician to save you, you have already lost.  It is not only a privilege for a free people to stand and fight for liberty, it is our duty.  Not only to the Founding Fathers, or to those who fought and died to create our Republic, or to our children and their children.

But rather to God who gave us these freedoms to begin with.

Can you hear me now? was last modified: December 22nd, 2021 by Guest Contributor S. Chris Anders

That was an excellent, even exceptional, account, analysis, and discussion, addressing our current situation not with taking points, but with our Constitution and our history.

I’m stealing this! It is a great opening statement to a book entitled something like, How We Got Where We Are, and How To Fix It!
You want credit? Of course, our troubles are much deeper and wider. How about starting with us losing the Whiskey Rebellion? That was even before the Alien and Sedition Acts. We supposedly won that one! Then, how about the Northwest Ordnance? Was it right to include land for schools and churches? Didn’t that violate the No Religious Test Clause? Did Madison open that door by insisting that men be angels? Our Founding Fathers did know we were not, and that their efforts were imperfect for an imperfect people. The answer was/ is complicated. Somehow we had/ have to bridge the gap between a rigid, though phony, Wall of Separation and preserve Christian morality as our foundation of Liberty, whilst fiercely fighting against Big Government that exceeds Constitutional Limits.

…establishment Republicans? RINO’s = Democrats in all but name.

Good reasons why the GOP base (conservative patriots) dumped the 16 RINO’s standing of the debate stage and followed Trump!

what do you suggest?

A legend in his mind