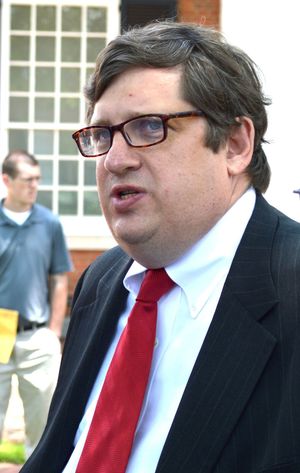 Candidates For Chairman of The Board in Loudoun

It was very interesting that within 7 hours of Charles King’s announcement in Leesburg Today that he would seek the Republican nomination for Chairman of the Board, Scott York announced that he would not seek re-election. Ummmm……just a coincidence, I’m sure.[read_more] In a statement to the Loudoun Times Mirror King said he is running because,

“because it’s time for a change in county government.”

“I think local government needs to be less partisan, and I think the chairman needs to take a less confrontational approach,”

Some of the current Board members are also considering a run for Chairman. First in line is Ralph Buona who will decide this weekend if he will give up a safe seat to risk it all and run for chair. Should he decide not to run, Sean Williams is next in line, followed by Matt Letourneau. No word on Suzanne Volpe’s intentions. She has a democrat challenger in a less than safe seat for Republicans.

It is likely that Loudoun Republicans will chose a convention to nominate our candidates. That will be decided at the LCRC meeting later this month. Charles King has the best chance of winning the nomination in that format. He will face democrat Phyllis Randall in the general election in November.

More on the story from our friends at VirginiaVirtucon.com.

Candidates For Chairman of The Board in Loudoun was last modified: August 9th, 2015 by Jeanine Martin

[…] run for re-election this year. In January, hours after Charlie King filed to run for Chairman, Scott York changed his mind and announced that he would not run for chair. Then in March it seemed York had not yet decided if he’s running again or not, saying […]

Joe May sponsored a bill that appears to have clouded the title to the houses in Waterford. The county attorney (through Geary Higgins) asked for this, caused huge problems for property owners, then quit. As it stands, it appears that Waterford is still a town and the county/state suggest they somehow own the streets and alleys in Waterford without having any deeds and without the underlying land owner having dedicated the land. None of the elected officials have stepped forward to fix Joe’s mess, which is contrary to the constitution and many other laws to protect property interests. Are they going to pass similar laws to claim rights and interests to property in other towns? The folks in Waterford seem unaware of the mess. No disclosures are mentioned in the many for sale listings. Buyer beware.

Can someone tell me what Dave LaRock has done for Loudoun other than beating Joe May? These guys promise to move mountains if they are elected then seem incapable of doing the right thing or getting anything done. Another huge disappointment.

If a leader for the Catoctin District ran, I think they would easily beat Gary Higgins. He misses too many meetings and has not been a leader. What has he accomplished?

I am very disappointed in this “All-Republican” Loudoun Board and feel that I was duped back in 2011.

Sure, I knew Delgaudio, Higgins, and Volpe. They were longstanding LCRC members and everyone knew and trusted where they were on key issues. Thus, it was no surprise that they voted against Dulles Rail.

Then, there were the “new guys”: Buona, Williams, and LeTourneau. They were never LCRC members and, after they gained their Republican endorsements, basically blew off the LCRC and never came back. To no surprise, they all voted for Dulles Rail. We trusted them and that trust was misplaced.

I look forward to supporting Charlie King for Chairman.

King will beat Randall, Volpe will win, Delgaudio will win, Buona will win and Higgins will win. Williams, Letournea and Reid will lose, they just lost their big daddy York and cannot stand on their own like the others. The ramifications from one Loudoun are too big for these 3 to overcome.