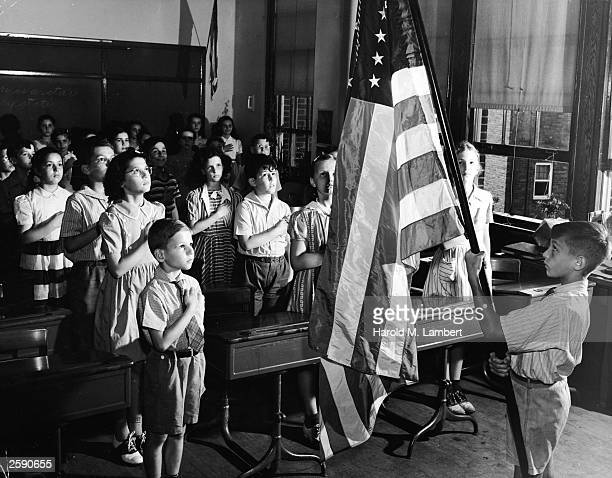 School children hold their hands across their chests while pledging allegiance to the U.S. flag in a classroom, 1950s. (Photo by Lambert/Getty Images)

Civics, civility, and the death of a nation

Like many “boomers” civics  “the study of the rights and obligations of citizens in society” was not only part of my formal education at an early age but became engrained in my home life.  My parents sought to ensure that their offspring matured into responsible adults capable of supporting themselves without the benefit of government handouts, were capable of giving back and making the world around them a better place to live. Most of us aspired to live the American dream building upon the sacrifices many of our forefathers and mothers made as immigrants coming to a land of opportunity where hard work and self-sacrifice were considered virtues that all aspired to achieve.

At an early age, we were required to cite passages from the Declaration of Independence, the Constitution, the Gettysburg Address, and other seminal documents that defined us as Americans. We knew the branches of our Federal, state, and local governments and the roles and responsibilities of each. A working level of civics was expected of each of us and was one of the keys to becoming responsible adults and ensuring that our Democratic Republic would flourish and become self-sustaining.

Unfortunately, there were numerous secondary and lasting effects of LBJ’s “Great Society” brought to you by the Democrat Party. Many communities which had heretofore been a self-sustaining and proud part of American society began to unravel as many became dependent on government assistance and welfare – now mothers vs fathers became the head of the household. Generations have now become dependent and believe they are “entitled” to government assistance rather than seeking gainful employment and contributing back to society.

In addition, the teaching of civics in primary and secondary education was replaced by other curriculum thought to be “more relevant” to the development of adolescents into adults. Unfortunately, many adults who are products of this enlightened education system cannot even name their respective state and federal officials much less have a clue how a bill or budget is passed. As long as they have social media to mesmerize them and government handouts to sustain them, they are happy.

It should not be a surprise that our democratic republic is indeed failing miserably.  We do not allow Doctors, Lawyers, and even automobile mechanics to practice their respective skills without the prerequisite training and licensing, yet we expect the American people to be citizens without any formal education. Incomprehensible!

We no longer teach our children what it means to be an American. The responsibilities of citizenship are no longer taught at home or at school. We no longer teach the values of self-reliance and the critical thinking skills that were once taken for granted.  These skills are essential and required for our society to prevail in a world permeated with communism and socialism.

And lastly,  now that we no longer teach civics, people of differing views can no longer even have a civil discussion. Rather than attempt to understand differences of opinion most are content to attack and demean the neighbor with the click of a keystroke.

On July 4th, 2026 we will mark the  250th anniversary of the founding of this great Republic – America’s semi quincentennial. We are a nation that has endured numerous trials, external wars, and a horrific Civil War and yet the great American experiment in governance continued to thrive.  In spite of these challenges, as we approach 250 years unless we fail to act and get back to the basics of self-reliance, civility, and personal responsibility we are doomed to failure.

Civics, civility, and the death of a nation was last modified: January 20th, 2023 by James Poplar

“We no longer teach our children what it means to be an American. The responsibilities of citizenship are no longer taught at home or at school. We no longer teach the values of self-reliance and the critical thinking skills that were once taken for granted” Bullshit. Get your ass into some class rooms, sit down, shut up and pay attention