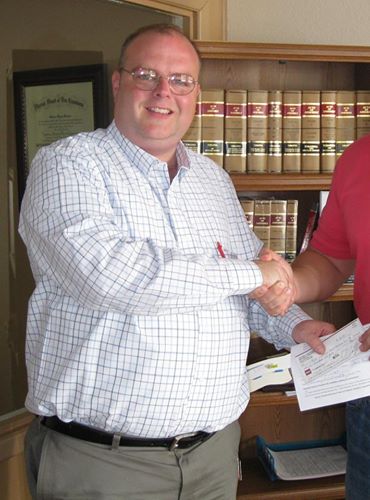 Clifton Cauthorne, a Republican council member in Pound VA, has filed for the Republican nomination to fill the 4th district House of Delegates seat that was recently vacated when Ben Chafin was elected to fill Virginia’s 38th Senate seat vacated by Phil Puckett’s resignation on June 9th. The special election to fill the 4th district seat will be held on December 9th, 2014. [read_more]

It is official. At noon today I turned in my paperwork to run for the Republican nomination for the Fourth District House of Delegates seat. I hope many of my Facebook friends will join me at a Mass Meeting to choose the candidate at Castlewood High School on Saturday, October 4th. Registration will be from 4:00-6:00PM, and the Mass Meeting will take place at 6:00PM. All registered voters are welcome to participate.

Mr.Cauthorne is a Pastor at Calvary Baptist Church in Clintwood, VA.   He is married and the father of 6 children who are home schooled.  He very much supports home schooling and parental rights.  He is a conservative republican who is pro life and a supporter of traditional marriage between a man a woman.  One of the reasons he wants to go to Richmond is to work against the government regulations that are stiflingly our energy companies in Virginia and our small farmers across the state.

Pastor Cauthorne discusses his candidacy in this interview:

“All registered voters are welcome to participate” How outrageous!

I thought after Virginia Beach, Campbell, etc etc etc that “all” registered voters are not welcomed to a Republican Nomination contest unless they are ” in accord with the principles of the Republican Party, and who, if requested, express in open meeting either orally or in writing as may be required their intent to support all of its nominees for public office in the ensuing election” and beyond that have not voted in any Democrat primaries or other nomination methods, or given any money or support to any candidate running against a Republican nominee.
He should not be the nominee if for no other reason than this call for non-Republicans to vote in this mass meeting.

There are non-Republicans in the 4th?

I thought we ran all the Dems out of SWVA. 😉