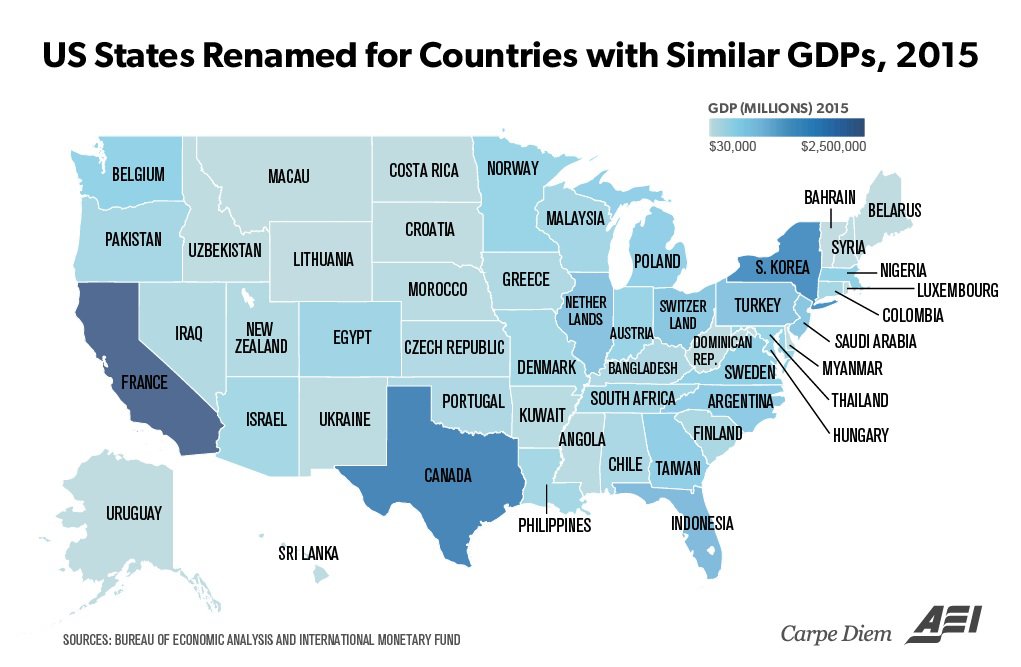 The United States has a GDP (Gross Domestic Product)of $18 Trillion. AEI.org has renamed the states to match their GDP with countries around the world.  The results are very interesting:

1. America’s largest state economy is California, which produced $2.46 trillion of economic output in 2015, just slightly above the GDP of France during the same period of $2.42 trillion. Consider this: California has a workforce of about 19 million compared to an employment level in France of slightly more than 25 million workers. Amazingly, it required 32% (and 6 million) more workers in France to produce the same economic output last year as California! That’s a testament to the superior, world-class productivity of the American worker. Further, California as a separate country would have been the 6th largest economy in the world last year, ahead of France ($2.42 trillion) and India ($2.09 trillion) and not too far behind No. 5 UK at $2.85 trillion.

2. America’s second largest state economy – Texas – produced $1.59 trillion of economic output in 2015, which would have ranked the Lone Star State as the world’s 10th largest economy last year. GDP in Texas was also slightly higher than Canada’s GDP last year of $1.55 trillion. However, to produce about the same amount of economic output as Texas required a workforce in Canada (18 million) that was 50% larger than employment in the state of Texas (12 million). That is, it required 6 million more workers in Canada to produce the same output as Texas last year. Another example of the world-class productivity of the American workforce.

Overall, the US produced 24.5% of world GDP in 2015, with only about 4.5% of the world’s population. Three of America’s states (California, Texas and New York) – as separate countries – would have ranked in the world’s top 11 largest economies last year. Together, those three US states produced $5.5 trillion in economic output last year, and as a separate country would have ranked as the world’s third largest economy and ahead of No. 3 Japan ($4.1 trillion) by almost $1.5 trillion. And one of those states – California – produced more than $2 trillion in economic output in 2015 – and the other two (Texas and New York) produced more than $1.5 trillion and $1.4 trillion of GDP in 2015 respectively. Adjusted for the size of the workforce, there might not be any country in the world that produces as much output per worker as the US, thanks to the world-class productivity of the American workforce. The map above and the statistics summarized here help remind us of the enormity of the economic powerhouse we live and work in. So let’s not lose sight of how ridiculously large and powerful the US economy is, and how much wealth, output and prosperity is being created every day in the largest economic engine ever in human history.

Let’s not Hillary’s socialist policies ruin this economic engine with her policies.

Read much more about our great economic engine here.

Ok, fine, but the USA is also one of the largest debt, ever, in the history of the world as we know it or have record history.
But, you are correct.

Yes, I found it interesting that our debt is more than our GDP. The debt is $19 Trillion and our GDP is $18 Trillion. Not good.

All this shows is how much the middl-class are getting ripped off. We over pay for healthcare, then say the American worker is productive. BS.

Balance the budget, it all comes crashing down.