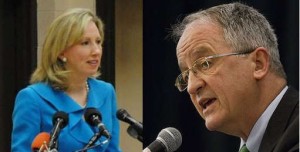 Two members of the Virginia House of Delegates are running for the 10th District GOP nomination to succeed retiring Rep. Frank Wolf. They apparently have quite different approaches to Medicaid expansion in Virginia.

Del. Barbara Comstock (R-McLean) and Del. Bob Marshall (R-Prince William) are both running for Congress. Both are also now faced with the budget showdown that continues to unfold in Richmond over Medicaid expansion under President Obama’s healthcare law. The two lawmakers’ differing approaches are a study in contrast.

Marshall is known as the conservative firebrand’s firebrand…the guy whose Movement Conservative pedigree makes other rightwingers feel insecure about their own ideological bona fides. That’s because Marshall is absolutely fearless in the face of opposing forces within his party, and routinely takes on GOP leadership and the rest of the Republican caucus on matters of principle. Fans see this as courageous, principled leadership. Criticism from his numerous detractors ranges from intimating that Marshall is nothing more than a skilled self-promoter, to charges that he is completely and totally tone deaf when it comes to positioning the party for electoral success.

Be that as it may, much of what Marshall advocates are things that most other conservatives wish they had thought of. Case in point: Marshall’s having introduced amendments to the special session budget in the House that are designed to protect against Medicaid expansion by either the MIRC (the special legislative commission set up last year) or the Governor.  In an email to supporters, Marshall laid out his plan this morning:

My first amendment eliminates language which authorizes appropriations for whatever is necessary to cover newly eligible individuals under Medicaid upon a simple finding by the Medicaid Innovation and Reform Commission (“MIRC”) that “reforms” have been made….

My second amendment to HB 5002 eliminates a provision which would have limited any extension of Medicaid to a final date of June 30, 2016. While some may think this might limit an expansion, there are simply no provisions in the so-called Affordable Care Act (or the HHS regulations administering it) or the President’s executive actions that allow Virginia or any other state to unilaterally withdraw from Medicaid expansion once it has been initiated.

And my third amendment to the budget bill prohibits the Department of Medical Assistance Services from administratively expanding Medicaid under the guise of adopting new regulations to cover other parts of Obamacare.

We’re told that at least one other legislator will attempt to substitute an amendment identical to Marshall’s first amendment in a bid to ensure Marshall does not achieve a media victory over his colleague and 10th District rival, Del. Barbara Comstock.  The other amendments are expected to be passed by on voice votes.

Delegate Comstock supports Medicaid reform before trying to expand what is currently an inefficient and broken system that does not serve those intended as well as it should….Delegate Comstock supports Medicaid reform through the implementation of better-coordinated services and managed-care options, the adoption of cost-sharing, the promotion of health and wellness, and by cracking down on fraud. Delegate Comstock has continued working with her colleagues in the General Assembly to find workable reforms so that Medicaid can be expanded without unduly encroaching on other important areas of the budget such as education and transportation.

We like Barbara Comstock, and think she is in many ways a model for how the GOP can find its way out of the wilderness.  We tend to think Comstock is a formidable candidate who is more likely to win in November than the ever-controversial Marshall.  But, she first has to convince 10th District conservatives that she’s got them covered on the important hot-button issues of the day. For that, she might consider taking a page out of Marshall’s playbook every now and then.

UPDATE: 03/25/14 8:15 PM: Friends of Comstock have suggested we’ve been unfair in focusing exclusively on the above paragraph when describing Del. Comstock’s Medicaid record. They point out that she has emphasized in virtually every public statement that she is opposed to Medicaid expansion AND favors reform of the existing Medicaid system before she’ll consider revisiting that decision. Our further investigation suggests that the paragraph quoted above is indeed anomalous in this broader context (but it sure does read like she’s trying to find a way to expand Medicaid).

We do have objective proof, though, that Comstock is highly suspicious of how Medicaid expansion has been introduced: Del. Comstock was among just 17 delegates last year who voted against the 2013 budget that paved the way for where we currently are. Her contemporaneous statements suggest the vote was cast because of that budget’s Medicaid provisions. Voting ‘no’ alongside her? Del. Bob Marshall.

[…] Contrast on Medicaid Between 10th District Candidates, The Bull Elephant opines that Comstock is a good candidate. The author just wishes she would […]

Reply
Howie Fires Back at Speaker Howell on Comstock and Medicaid - The Bull Elephant April 11, 2014 at 3:32 pm

[…] called out that stance here. Now let’s look at “McAuliffe’s Medicaid Expansion.” All through the […]

[…] even had my issues with Del. Comstock in particular. I continue to have some reservations about certain language on her Delegate campaign website, but it is clear from everything she has said in this campaign—and from the actual votes […]

You are correct about the Gov’s pilot program but not the ideas being discussed by conservative reformers.

Conservatives all over the country are working on ways to truly reform Medicaid. Indiana has shown promise in its approach as have the pilot programs in Florida. True reform is not a sell out. Barbara Comstock supports true reform. Let’s not refuse to make a program like Medicaid much better through reforming it. Done correctly a reformed Medicaid would save huge amounts of money and if any expansion was limited to those truly in need and was paid out of definable savings from these reforms, then it just might make sense. I don’t know if this can happen, but it should be pursued. I believe it is this kind of reform that Barbara Comstock supports.

I wouldn’t believe Comstock even if she did mouth the right lines, as her record shows strong inclinations to corporatism and expansion of government power.

Bob Marshall is the REAL DEAL. I would hate to lose him in Virginia – we really need him to shield us from this horrible State Executive Branch – the Trifecta of TERRIBLE. Mcawful, Northam and Pickled Herring.

So called “reforms” never work. Virginia will be stuck with a massive tax increase if medicaid is passed, under any name. The Governor’s ‘pilot’ won’t work either. After two years Virginia will left holding the bag and the huge bill. Just say NO to medicaid expansion in Virginia!