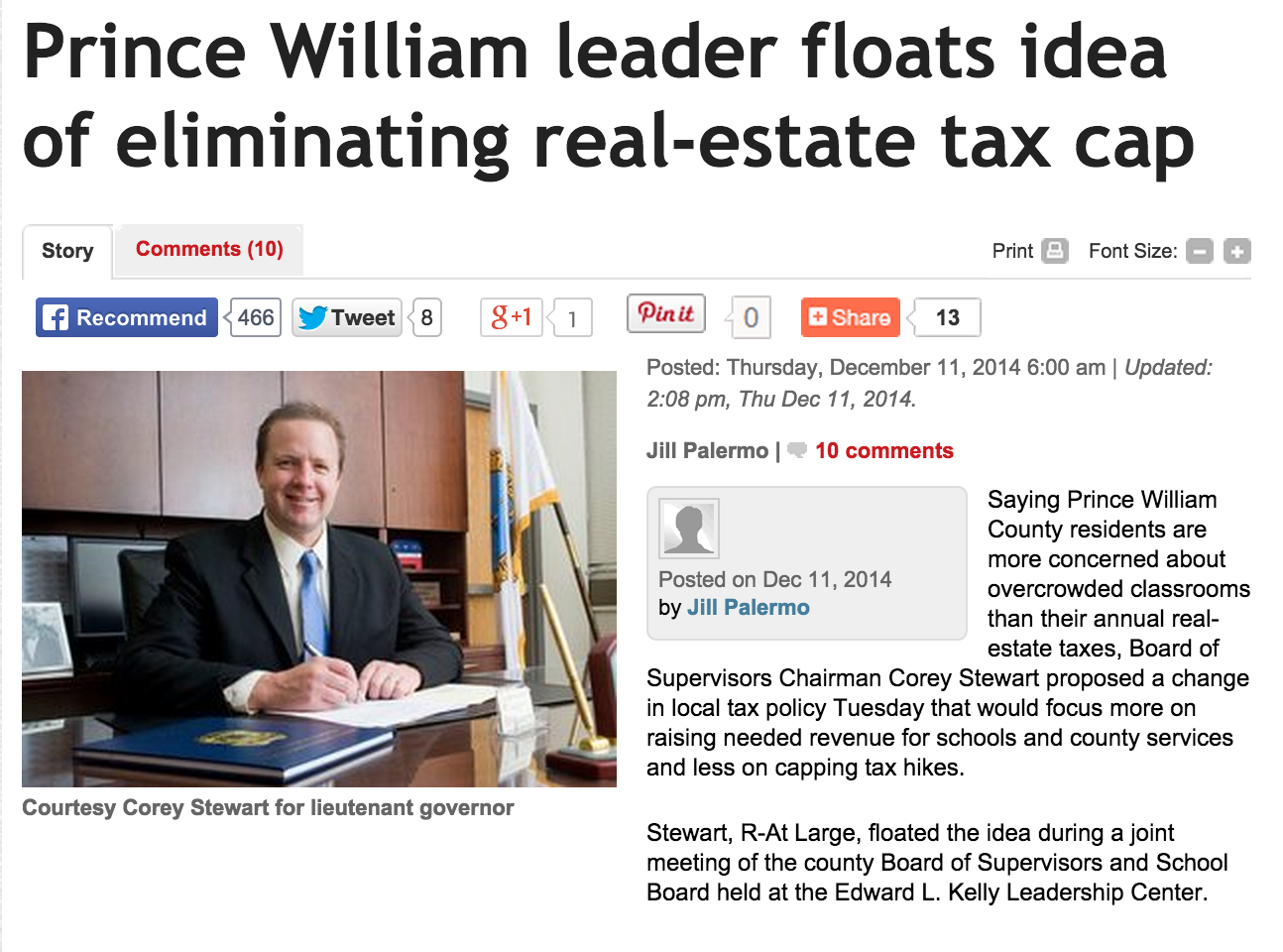 Over the weekend, conservatives in Prince William Co. have been furious as yet again, Republican Chairman Corey Stewart has been quoted as talking about a tax increase.  After just passing a tax increase the beginning of this year, and area activists and blogs tracking ongoing waste in county government, and the school board, talk of even being open to a tax increase makes little sense to many. [read_more] 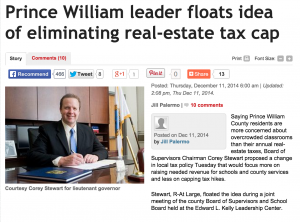 On Thursday, Inside NoVa published an article entitled, Prince William leader floats idea of eliminating real-estate tax cap.  The response was swift.  Within hours, Virginia Virtucon laid down the hammer declaring that Corey Stewart had committed political suicide.  Activists started talking, shocked that a Chairman in danger of a nomination challenge from the right would say he was open to another tax increase right as people were deciding whether to run.

In fairness to Chairman Stewart, the article mischaracterizes what he was trying to do.  He was trying to reform the tax code to eliminate the automatic 4% increase in property taxes regardless of whether they are needed, and instead make projections based on total revenue.  “Our current tax policy calls for property tax increases over the next four years regardless of whether or not they are needed. I want to end this policy. This policy leads to spikes and valleys in the counties revenue streams. When a government typically sees an increase in revenue beyond what they need to provide services, the excess money is spent. This is what I am trying to avoid.”

However, he did state that while it needed context, his quote in the paper was accurate.

“Pointing to the recent two-year county survey, as well as a separate survey his campaign conducted for political purposes, Stewart said increasing traffic congestion and school overcrowding are more immediate concerns for many residents than taxes.

Regardless of your political stripes, people are more concerned about their quality of life at home than they are about keeping tax bills so low, I mean 30 percent lower than in Fairfax and Loudoun counties.  There’s a price we are paying for that.”

His context was that he had continued by saying the citizens probably weren’t as willing to see their taxes increased due to inefficiencies and wasteful spending in the school budget.  (Of note, John Gray has submitted a FOIA on the county survey.)

Responding to the Inside NoVa article, Terrence Boulden, Prince William Co. Young Republican Chairman stated, “Its disappointing that Corey is not focusing on cutting waste instead of asking more of the citizens of PWC.”  Manassas Tea Party Chairman Dan Arnold was even more blunt, “Corey seems to have flipped his wig a long time ago.”

Former Del. Jeff Frederick who consistently won the Democrat areas of the county, and who is rumored to be considering a challenge to Chairman Stewart bemoaned the loss of the old conservative Corey Stewart.  He reiterated as well that pro-growth economic policies were key to long term success. “Maybe if he’d spend less time trying to over tax hard working Prince William homeowners and more time taking advantage of our county’s unmet potential in attracting businesses and jobs to locate here, he’s have less of a spending problem and more revenue to improve the county citizen’s quality of life by, among other things, reducing – not increasing – their tax burden.  How about he focus on economic growth rather than policies that will inevitably lead to contraction?”

Reaction to the Chairman’s increase was not limited to activists.  Elected officials throughout western part of Prince William County, the heavily Republican portion of the county were united in saying the Chairman needed to stop looking at the revenue side of the equation and take a much harder look at the spending side of the equation.

“I can appreciate that Chairman Stewart is looking for ways to fund the County and School Board’s budgets.  However, his proposal to only talk about revenues takes the taxpayer out as the main focus of the budget discussion.  Especially during these sluggish economic times, we have to be constantly reminded the impacts tax increases have on the families of Prince William County.  For the last two years, I have been warning this Board that their aggressive spending plan was not sustainable in the current economic environment.  The Board cannot continue to treat the taxpayers of this County as a bottomless piggy-bank for the ever-growing County spending habits.”

Jeaning Lawson Republican candidate for the open Brentsville believes the solution is to prioritize spending, not raise taxes.

“I certainly disagree with Chairman Stewart’s intentions to raise taxes even more.  Prince William County already has the highest tax rate in Northern Virginia and one of the highest tax rates in the Commonwealth.  The solution to funding our schools is not to take more money from the parents of the children in the schools.  The solution is to prioritize spending to fund core local government responsibilities with the money we receive from the hard working PW county residents who know best how to spend their money to “improve their quality of life”.  My campaign has always been about being responsive to the taxpayers, and if I am able to serve on the Board, I’ll side with the taxpayers against the big spenders.”

While proposing a number of ways to reform the contentious revenue sharing agreement between the School Board and County Government, Gil Trenum, the school board member from Brentsville also called for prioritized spending over increased taxes.

I definitely believe that we need to prioritize our spending, funding those things that are most important (i.e. class size reductions, teacher compensation) first. We should always look to find areas of spending that could be used more effectively before we even consider asking the citizens to contribute more from their paychecks. This applies to both the county and the school budgets.

“Local elected officials would not be tempted to ‘explore’ a property tax hike if the county budget only included necessary expenses, instead of nice ones like an $8.4 million swimming pool in one of our high schools.

Yes, Prince William citizens are concerned about traffic congestion from having too many homes without adequate roads, and having their children attend school in trailers.  But that does not mean they would be fine with having their real estate taxes hiked.   Families make hard decisions to keep within their budgets and so should government, most especially in our current economy.”

I can’t imagine a single citizen is truly open to having their taxes raised while their incomes are shrinking, and county government finds it so impossible to stop increasing spending, let alone cutting spending.  Hopefully Chairman Stewart will see the strong reaction against the trial balloon about how open the county is to increased taxes, and will instead lead the way in reforming the county and school budgets to make them lean and mean while more effectively delivering the service the county citizens expect.

Forget RINO; we have DIEBN – Democrat In Everything But Name. Good buy, Corey Stewart. You did good work earlier; sorry to see you are corrupted now.

Reply
Virginia: Corey Stewart Doubles Down on Tax Hikes | JHPolitics December 16, 2014 at 7:17 am

Maybe the democrats will open a new republican wing in their party.. Our democrat numbers are high enough.