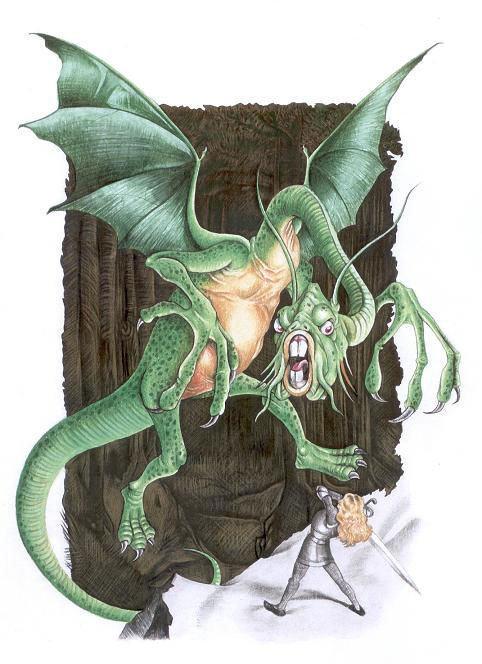 Crisis of the Jabberwock

`Twas brillig, and the slithy toves
Did gyre and gimble in the wabe:
All mimsy were the borogoves,
And the mome raths outgrabe.

Lewis Carroll’s wonderful nonsense poem, a few stanzas of which are presented here, seems to describe perfectly the looming threat of unknown shape and size now faced by President Donald Trump as the Robert Mueller special investigation moves into what Judge Andrew Napolitano calls the “Indict and Squeeze” phase. The judge says it is just the “tip of the prosecutorial iceberg.” He didn’t mention that it might sink the Trump ship-of-state, but he didn’t have to.

Mr. Mueller is following a familiar track in his special investigation:

This tactic was used by special prosecutor Patrick Fitzgerald in his investigation of the Valerie Plame case in 2005. When Miss Plame was “outed” as a CIA agent during the G. W. Bush administration, presidential advisor Carl Rove was immediately accused of the leak – a federal crime, if proven. Political opponents looked forward to seeing Mr. Rove “frog-marched” out of the White House in handcuffs. It turned out, however, that Miss Plame was not actually a CIA “secret agent.” Furthermore, State Department employee Richard Armitage admitted publicizing her status as a CIA (non-agent) employee.

Thus, as Miss Plame was not truly a CIA “agent,” the alleged crime had not occurred. But this did not stop prosecutor Fitzgerald from charging Mr. Cheney’s chief advisor and lawyer Lewis “Scooter” Libby of lying to investigators. Mr. Libby resigned from his position and was subsequently sentenced to 30 months in prison and a $250,000 fine. When a federal appeals court refused to free Mr. Libby, pending his appeal to a higher court, President Bush commuted his sentence, but left the fine in place. Mr. Libby’s prosecution was widely denounced as politically motivated. Critics said he was punished out of prosecutorial “spite” because the investigation didn’t snag the primary targets. The episode became the model for future special investigators.

Following the same script, Mr. Mueller has now obtained indictments of Paul Manafort, former chairman of the Trump presidential campaign, and Rick Gates, Mr. Manafort’s long-time business associate and protégé. Mr. Manafort was indicted last week on charges of conspiracy against the United States, conspiracy to launder money, being an unregistered agent of a foreign principal, false and misleading FARA statements, other false statements, and seven counts of failure to report foreign bank and financial accounts. Mr. Gates was evidently indicted for complicity in some of those alleged offenses. All of these charges stem from activities which occurred long before the Trump candidacy was announced, so they have no possible connection to the president or his campaign. Both defendants have pled “not guilty” on all charges.

In addition to the indictments of Mr. Manafort and Mr. Gates, it was announced that George Papadopoulos, a former foreign policy advisor to Mr. Trump, pled guilty on October 5th to a charge of making false statements to FBI agents (sound familiar?) about his contacts with the Russian government in 2016 in connection with Mr. Trump’s campaign.

Mr. Papadopoulos, who has not yet been sentenced, may pose the greatest existential threat to Mr. Trump because he might have furnished evidence – of unknown veracity – to Mr. Mueller in exchange for more lenient treatment. A child could see that veiled coercion of this kind is an open invitation for any defendant to say what the prosecutor wants to hear about the president and his inner circle. As Judge Napolitano points out, it is an extremely dangerous and unreliable legal construct. Any good defense attorney should be able to cut such evidence to ribbons.

The problem is that Mr. Trump and his presidency will be damaged, whether or not he beats any charges stemming from evidence furnished by Messr. Papadopoulos, Manafort or Gates. The fact that the evidence by which he is accused is tainted (at best) or outright false (at worst) will cut no ice with Big Media, Democrats, and millions of ordinary citizens who will assume that where’s there’s smoke, there’s probably fire. The president can’t be indicted by Mr. Mueller, but enough Never-Trump Republicans might be convinced by the investigation’s charges to support articles of impeachment – i.e., the Holy Grail of the whole exercise.

Mr. Trump made a mistake when he acceded to Democrats’ demands for a special prosecutor to investigate Russia’s influence on the election. No doubt he knew his own hands were clean of any “collusion,” so perhaps he assumed that an honest, straightforward investigation would quickly affirm this and allow him to get on with his presidency. If he thought that, then he didn’t understand how the Inside-the-Beltway crowd operates, and he didn’t realize what he was dealing with. As is becoming clearer every day, Mr. Trump’s enemies will go to any lengths to destroy him. With Mr. Mueller they have the tools, and they are going after him, full bore.

Fortunately for the country, the president didn’t just fall off the turnip truck. He is an experienced, highly successful business executive who can recognize danger, and is smart enough to take timely action to correct a mistake. Does this mean he should hunker down in the Oval Office and wait for the “hammer” to fall? Certainly not. A real leader doesn’t sit around “waiting for developments.” He consults with his counsellors, weighs his options, and takes decisive action.

Mr. Trump’s path out of these woods seems clear. With the entire Trump-collusion narrative now being debunked as a fraudulent invention, and Hillary Clinton being fingered for actual (not imagined) Russia-collusion, the president needs to turn the situation around. Mr. Mueller is not independent of or superior to the president. He is a DoJ appointee, so he is technically Mr. Trump’s employee. What does an experienced executive do when an employee is causing disruption and problems for the organization?  Generally he first counsels the employee and tries to work things out. Failing that, he takes more drastic action.

In this case, the counselling-approach probably can’t work. It may have been tried already, but Mr. Mueller may believe that he doesn’t have to “work with” the president. Certainly Big Media has hammered the idea that a special prosecutor is beyond the president’s control. If Mr. Mueller believes that, then Mr. Trump  must launch a preemptive strike on the out-of-control Mueller investigation without delay. As I see it, he can choose from several options, including these:

The circus must be stopped – the sooner the better. It’s already gone on waaay too long. Mr. Trump’s decisive action, whatever it turns out to be, must be accompanied by his clear statement explaining to the people that in order to restore good order to our political process corrupt prosecutorial practices like coercing witnesses under fear of prosecution had to be stopped.

In any perilous political situation, a targeted individual’s best weapon is “sunlight.” In this case, exposing the scurrilous “indict and squeeze” practice will be the key to countering the media/political uproar that will result from closing down the Russia-collusion dog-and-pony show whose only purpose is to damage Mr. Trump and make his presidency ineffective. Mr. Trump’s enemies will scream, “perversion of justice!” but they need to look in the mirror.

Mrs. Clinton lost. Mr. Trump won. Elections have consequences. Mr. Trump deserves a chance to govern without a pack of dogs yapping at his heels. The country deserves better than this, too.

Crisis of the Jabberwock was last modified: November 6th, 2017 by Woody Zimmerman

Trouble for Democrats is that they went too far, they’ve created a sympathetic figure in Trump. I’ve spoken with a number of people who were not Trump fans leading up to the election who are now all in, and since Trump hasn’t actually accomplished anything, I have to assume its because the MSM and Democrats have forced non-Democrats into the Trump camp with their over the top nonsense.

Democrats have a real problem with Trump. During the campaign they were somewhat successful attacking him for being an idiot, but now when they attack him it is, in the eyes of many, an attack on all the people who supported him. Trump has successfully created that connection in people’s minds, that he is looking out for him (even if he isn’t, I leave judgement to the reader) and that any attack on him is an attack on them and everything they stand for. In many people’s minds Mueller is just another actor in an ongoing assault against them and what they stand for, another example of the lengths that their political foes will go to in order to strip them of their voice.

I think it’s a valid concern, really. The truth is that Trump was elected, and he is the President, and a lot of people’s votes put him there. Many of those people were part of the TEA Party revolution and have worked tirelessly over the past decade to win elections at the local, state, and federal level, and finally they’ve put their President in place to fix the problems they believe ail this country. Many of them feel that they were cheated along the way, that the MSM were against them, that they elected state representatives who turned around and screwed them, that they elected a Congress that hasn’t done what it said it would do, and Trump is their trump card. He is the ultimate embodiment of their collective frustrations with a system that has not worked for them.