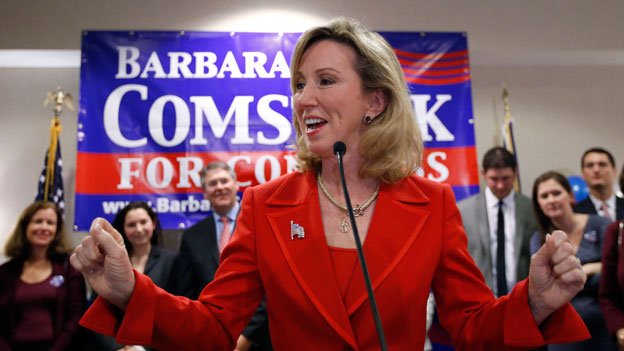 DCCC Spinning Their Wheels Against Comstock

The first term Congresswoman from the 10th positions herself well to hold on to evenly divided District.[read_more]

When Barbara Comstock won the nomination last year to succeed retiring GOP Representative Frank Wolf, she faced a huge challenge. Her district, which runs from northeastern Fairfax County through Loudoun and down into the Northern Shenandoah Valley, is fairly evenly split between Democrats (who secured an Obama victory in the district in 2008) and Republicans (who gave Mitt Romeny a narrow edge in 2012). Its proximity to Washington means a high percentage of voters whose livelihoods depend in some way on government, be it through direct employment or via the innumerable contractors and providers of services to support them, or the legions of lawyers and lobbyists who make their living dealing with the government.

As such, Comstock has attempted to walk a razor’s edge, siding at times with the conservative base. This has earned her the ire of the Democratic Congressional Campaign Committee, who reviles Comstock for the heresy to femaleness of opposing Hillary Clinton, calling her a “professional Clinton hater,” and citing with much opprobrium news stories, such as this one, that characterize Comstock as “A One-Woman Wrecking Crew [Targeting] Democratic Leaders.”

At other times, Comstock has taken more “pragmatic” votes designed to appeal directly to her government-centric District (see this piece from TBE: “Barbara Comstock Votes With Democrats to Fully Fund DHS through September“).

Whatever you think of her votes, her strategy is paying off. Literally.  The Washington Post is reporting that Comstock has raised $1.1 million so far since her election last November.  At this pace, she will have close to $3 million to fend off any Democrat challengers for her seat next year, and likely more if the fundraising pace picks up closer to the election.  Democrats are hoping that the larger turnout in a presidential year can tip the balance in their favor.

They’d be better off looking for a candidate who can actually stand toe-to-toe with Comstock, unlike the disaster of a candidate they ran last time.  Comstock is not your run-of-the-mill pol.  She has a charm and an ability to connect with voters that may be unmatched among other members of the Virginia delegation, and she’s going to have the resources to back it up.

And though there are rumors of a nomination challenge from the right, every time Democrats open their mouths to attack Comstock for conservative votes, it makes such a challenge that much more difficult.  This hasn’t stopped the DCCC from trying to make Comstock a “one term wonder,” and excoriating her for having “reckless and irresponsible positions.”  Such empty attacks won’t do much to shake the electorate’s faith in this candidate, especially not after they sent her to Congress with a 16-point margin.

Barbara Comstock is a intelligent legislator who understands she represents ALL of her constituents. She won because of her common sense approach to legislating. Comparing Comstock to Connolly is not only a insult to her and her family, but also to her supporters like myself who know firsthand she is no Gerry Connolly.

Comstock has demonstrated time and time again her ability to win an election because of her campaign strategy, organizational structure, and the ability to raise large sums of money to be competitive in a race against the Democrats.

Comstock haters on this site need to direct their anger towards the Democrats not Comstock. Stop trying to take out officials like Barbara who are our best hope of winning elections.

Get a life folks and stop attacking a female representative who is doing what the constituents of the 10 th Congressional District are asking her to do.

Reagan George- like most fair minded,intelligent, hardworking folks, I could careless what Comstock’s score is on Heritage, Freedom Works, or this blog, I will judge her record based on her ability to legislate and work within Congress to accomplish the needs of those she represents.Relying on a scorecard is a sign of incompetence.

Hey Steve, Any chance your heartthrob Susan Stimpson might move to Northern Virginia to primary Congresswoman Comstock? I know that would get you and Mr. Herr all fired up.

Comstock’s greatest threat may come from inside the party in 2016. It is important to note the nomination will likely be decided by either a convention or firehouse primary. At this point, based on the current 10th committee makeup I would guess convention. If a credible candidate comes out of Loudoun we will have a major race on our hands. Rep. Comstock has a lock on Fairfax so it’s all about Loudoun, Loudoun, and more Loudoun……. If a credible challenger steps up, it will be interesting/fun to watch.

By all indications Barbara Comstock has abandoned any semblance of being a principled conservative elected official. Her failing scores on Heritage, FreedomWorks, and Conservative Review belie her Progressive voting record. The DCCC may dislike her, but the Republican grassroots like her even less. The search is on for a potential primary candidate in the 10th District. All of her money, like the pay-off for her Obamatrade vote, will not save her from the grassroots voters. We will not run 5 candidates against her next time. Dollars will not save her, just ask Eric Cantor.

I am in Southwestern Virginia and contributed to her campaign. I hope she used it well because that is absolutely the last nickel she will raise from me. She has deserted us and I have sent her emails saying so. But , of course, she is “too Busy” to reply. I am totally through with Ms.Comstock, I can tell her that I am not alone.

1) Comstock won the nomination with over 50% of the vote, which means that even one candidate would not have won enough support of the conservative grassroots to defeat her;

2) The Republican grassroots likes her fine. A few people inside that group may not, but they/you don’t speak for everybody. Comstock is less at risk of losing the nomination than she is at losing the general election.

4) “belie” doesn’t mean what you think it means.

Sorry, “belie” stands, it is the word “Progressive” that was the mistake. Her voting record belies her conservatism. The grassroots are fed up with big government, cronyism the Republican party now seems to stand for. The grassroots are also tired of their duplicitous actions when they campaign as a principled conservative and once elected govern as either a progressive Democrat or a Rockefeller/McCain/Graham Republican. Having an “R” behind their name doesn’t mean as much as it once did.

As to her winning previously, the grassroots were weakened when their efforts were diluted by the five competing candidates, which led to a lack of focus by the activist right. My comparison to Cantor stands. Principled conservatives were focused and volunteering in droves against Cantor and their efforts were not diluted by either multiple ego driven candidates or a Libertarian stalking house funded by the Democrats. Money doesn’t vote, people do.

She’s been in office for seven months. There is zero chance that few complaining about her aren’t just sour grapes from your guy not winning the nomination.

She also votes similar to how she did as a Delegate: conservative, but what’s right for her district and her constituents. She ran as who she is for the nomination, won it convincingly, and then trounced the Democrat in November. You weren’t sold a false bill of goods.

Finally, Cantor was defeated because he lost touch with the people in his district. To compare that to Comstock, I’ll ask: have you ever seen Comstock work a crowd or knock on doors? I rest my case.

Dave Brat has been office for a month or two longer than she has and all three aforementioned groups has rated him with an “A” conservative voting record. Conservative Review has him at 100%. She has an “F” from all three. Her score is four times better than Gerry Connolly and it is still an “F”. Not only is Gerry bad, but she is not much better. Maybe she can get a copy of Dave’s conservative playbook, she evidently lost hers.

She just attended a Ramadan sponsored meeting with a CAIR front group called EMERGE This group is so bad that Debbie Wassermann-Schultz cancelled her keynote speech with them; but not Barbara. Check them out on http://WWW.DISCOVERTHENETWORK.ORG.

Also, check out the article in http://www.maplite.com that showed how much money was paid to key Republicans to pass Obamatrade and Fast Track. Mitch McConnell $9 million, Boehner 5 mil, Macarthy and Scalise 3 mil each. Barbara was a bargain (maybe because she was so new at 1 mil.)

Bottom-line, Frank Wolf was given a pass on his voting record mainly for his age and he carried the Benghazi scandal forward. We conservative that voted for Barbara expect much better than an “F” from her.

There’s nothing I can say to convince you that Comstock and Gerry Connolly aren’t two peas in a pod. You’ve had your mind made up since before she won the nomination, and you will carry your torch for a less mainstream candidate for as long as you desire. If you want to listen to various fly-by-night organizations who are more interested than having 100 ideologically “pure” Republicans in Congress than an actual majority, that’s your right as an American.

All I can do is be thankful that you and those who would agree with you are in the minority of the Republican Party, and the extreme minority of the general voting population. Comstock doesn’t have a base issue; she’ll win re-nomination easily and gear up for the Democrats’ last chance to oust her. She’ll do that the same way she’s won every tough fight in her career: by being the savviest, hardest-working, and most appealing candidate on the ballot.

Unfortunately, establishment GOP types only care that there is an “R” in front of her name. You can’t expect stupid people to pay attention to silly things like the Republican Creed or anything.

I beg to differ on the grass roots. No one likes her. Whether she wins the nomination or not is always up for grabs. The grass roots is against her for very good reason.

LOL “no one likes her” at least 7,337 Republican voters disagree with you.

You don’t speak for everyone. As far as I can tell, you only speak for the other pseudonymous posters who aren’t willing to put their names by their words. Why should I believe you even live in the 10th, or have ever met an activist?