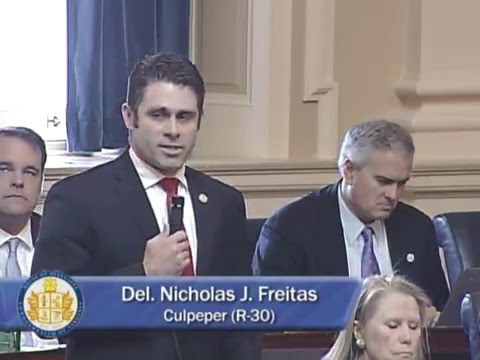 Nick Freitas’ recent speech on the 2nd Amendment and the rude Democrats in the House of Delegates:

Delegate Nick Freitas on the 2nd Amendment and lack of respect from Democrats in the House of Delegates was last modified: March 3rd, 2018 by Jeanine Martin

However, we need go further back to 1789 and the adoption of the Second Amendment, which was part and parcel of the the 18th-century founding fathers replacement of Yahweh’s moral law and Biblical principles for their own capricious man-made traditions. From this was created the rights culture by which non-optional Biblical responsibilities were replaced with optional Enlightenment rights:

“[B]ecause they have … trespassed against my law … they have sown the wind, and they shall reap the whirlwind….” (Hosea 8:1, 7)

Today’s America is reaping the inevitable whirlwind (including everything that’s enumerated in the video above) resulting from the wind sown by the constitutional framers.

“Thus says Yahweh, “Stand by the ways and see and ask for the ancient paths, where the good way is, and walk in it; and you shall find rest for your souls….” (Jeremiah 6:16)

America needs to return to what pre-Second Amendment Americans looked to as their authority to bear arms in defense of themselves, their families, and others: the Biblical non-optional responsibility vs. the the Second Amendment’s Enlightenment optional right to do so.

If every Christian man were armed and ready to take out the Cruzs (and protected by government for doing so), it would all but eliminate mass murderers, and most other murderers as well.

America was sold down the river when the 18th-century Enlightenment and Masonic founding fathers replaced Biblical responsibilities with Enlightenment rights, and nothing demonstrates it better than the Second Amendment.

Think about it: The Amendment WITH the wording “shall not be infringed” is the MOST infringed, licensed, and limited Amendment of the entire twenty seven. Furthermore, a future generation of our posterity is likely to see the Second Amendment whittled away entirely or repealed altogether. This is inherent nature and danger of optional Enlightenment rights versus non-optional Biblical responsibilities, such as the following:

“Let the high praises of God be in their mouth, and a twoedged sword [or today’s equivalent] in their hand … this honour have all his saints. Praise ye Yah.” (Psalm 149:6-9)

“But if any provide not for his own, and specially for those of his own house [including spiritual and physical protection], he hath denied the faith, and is worse than an infidel.” (1 Timothy 5:8)

Which is more potent: 1) an optional right, or 2) a non-optional responsibility.

Which is more likely to be legislated, licensed, and limited?

Which did the pre-Second Amendment Americans look to as their authority for bearing arms?

For more, listen to “The Second Amendment: A Knife in a Gunfight,” delivered at the Springfield, Missouri Firearms and Freedom Symposium, at http://www.bibleversusconstitution.com/#FeaturedMessages.

At this same location, you will also find a radio interview Larry Pratt (Executive Director of Gun Owners of America) conducted with me on this same subject. I think you’ll find Mr. Pratt’s remarks especially interesting.

Only a heartless, anti-science leftist would want to send our kids into dangerous ‘gun-free’ zones every day. These are the most dangerous places in America, yet liberals somehow think this is acceptable for our precious children. Sick.

Democratic delegates are all up in arms and outrageously outraged today about the “dog whistles” involved in telling them the truth.

Huh, and I thought I was good at emptying out a room…

We need Republicans like Nick Freitas. His speach was eleoquent, genuine and to the point.

And, it was blunt. For far too many years, the GOPe has tried to kiss up to the Democrats only to get ridiculed and abused by them. Now, and I credit Trump for this, there is some real fighting spirit in the Republican Party – and the Democrats don’t really know what to do about it other than run, hide, and scream.

No wonder the Democrats walked out. Far too much truth and honesty. Bravo.

I watched the video.
I like it. He is a good man with vigor and passion on *this issue*.
You and I have brought good discussion on this.
I would only fully support him if he also is willing to have debate and bring to the floor measures other issues I discuss (with frequency).
The Constitution is to protect
Life, Liberty and the pursuit of Happiness.
Well my frequently discussed issue has taken life, it has obstructed my liberty (rule of law being enforced) and it has placed illegal obstructions in my pursuit of Happiness,
Which is to operate a legal bussiness, employ legally and without assistance from the Goverment.
Delegate Freitas has no less passion for this issue he discusses than I with the illegal commerce issue that I discuss.
At the end of the day the Delegate needs my support more that I need his, for I will continue to pull myself up by my own boot laces ever morning.
This is how a man without a PAC donation is to lobby.

Woo boy… they actually walked out?

It is much worse than babies. The truth has become an evil to them. Honesty is to be avoided in favor of political correctness.

10 million views on the internet! WOW.

orchestrated by FOX news. Happy to keep nick in a uniform……………with a gun………….but otherwise he should shut the hell up

Pause for a moment would this man better serve us in our General Assembly rater than be lost in the do nothing swamp or the halls of Congress?
Yes from a 2nd Amendment standpoint a much better Candidate to run against Warner than the the previous one (who I will never support).

I still believe that Corey Stewart is the only Candidate to have strong enough footing to call out Kaine , the Unions ( his bed buddies) and their protection or illegal aliens.

Which of these is “Conservative” ?

Private sector loves workforce development. Their employee signs a two year commitment to the company, the company gets the training for low cost or free, and they refuse to increase the employee’s pay for the added value. Then if the employee quits before the commitment is up, they sue them to get the “company cost” reimbursed. Sometimes an ex-employee will actually go to court, where they find out they don’t owe anything because the education money wasn’t the company’s in the first place.

Who pays for the training?

But if tax dollars are used for workforce development is this Conservative?

That boy is trying to out-Corey Corey.

Good luck with that.

This is why we have nomination contests… besides, ‘There can only be one!’

But with a lot of work and a little luck, he could be.

VAGOP can only win with an army of Coreys. The dividing line between the VAGOP is no longer the pantomime conservative ‘liberty’ litmus test but rather Trump Republicans vs. Republican never has-was’s shaking their fists at the digital sky.

Rocinante!!! Where have you been hiding

The boss finally gave me some time off and I’m still on socmed timeout, AND, the party gets soooooo stupid when I’m not here to guide it.

Yes, Nick Freitas is the dream candidate so far. He is a great communicator with wholesome values, and also willing to fight. His biggest risk would be making the fatal mistake of saying something stupid about Corey Stewart or Donald Trump. Half his support would disappear immediately if he projects even a whiff of the Never disease.

I think he gets that, and I think he is playing the long game for an election after this one… but you have to start somewhere. If he runs well, builds a team, and helps elect the nominee, he will go far (Unless and until the party screws it up somehow.)

I would like to see Republicans stop with the claim of the party of Lincoln.
155 Years ago Lincoln issued the Emancipation Proclamation. This was meant to free men of their ownership from another.
These men were owned for one reason; to exploit their labor for profit.
I feel deeply that if today’s Republicans had a hint of Lincolnsequence values they would be looking at today’s slave; the illegal alien being exploitated for profit.
The illegal alien along with complicit legislators

The Democrats are still the party of involuntary servitude, as they always have been. Today, Democrats are supporting involuntary servitude in the form of socialism. Republicans have always opposed slavery, we have never changed one bit in this. If anyone is not being paid the agreed wages for work completed, Republicans will support that person getting paid the wages they agreed to work for. They will not, however, support someone not following the same laws as everyone else.

5 Republicans voted NO
on hb1106,
5 Republicans voted NO to allow Santurary Employment.
Why are there no Republicans to fight waste, fraud and abuse.
Illegal employment?
Illegal Commerce?
Sorry, but the vote speaks for itself.
Delegate Terry Kilgore and 4 others voted for Santurary and Freitas watched.
Freitas may have protected us from enemies abroad, he is not protecting us from the domestic enemy of illegal immigration, fraud , economic terrorism.

The Emancipation Proclamation freed exactly zero slaves. It did not even attempt to free the slaves in the North and Lincoln had no power over any of the Confederate states when the proclamation was issued.

That being said, Freitas was right that Democrats passed and enforced Jim Crow laws and segregation. Democrats were the party of massive resistance. And Democrats have created the modern welfare state.

You are correct it did not free the slaves it was just a mere political move to keep the French from entering the War on behalf of the South.

Still today Va Republicans allow the employment fraud that fosters the growth of illegal immigration in Virginia.
Nick talks well on this clip (I will surrender you
that ) but is no more than
Silent Nick when it comes to fraud and Sanctuary employment within the Commonwealth.
****He is not protecting from the domestic enemy.***

The timing of the gun issue is convenient to Delegate Freitas having Kaine stance on assault rifles but I see no other reason for the Delegate.
As I so frequently say ;
Hold on the Gun issue and abortion and what else does he have? Having tax payers foot the bill for workforce development for Corporate America? Liberal tears I can’t train ( meaning; spend their own money) anyone to work , we need the Goverment to pay for that.
Corporate America can pay to train their own labor.
I don’t understand; can’t pay for public education but requires the public to educate corporate America’s workforce. Not logical at all.
I stand with Corey Stewart

True speech… every word of it.